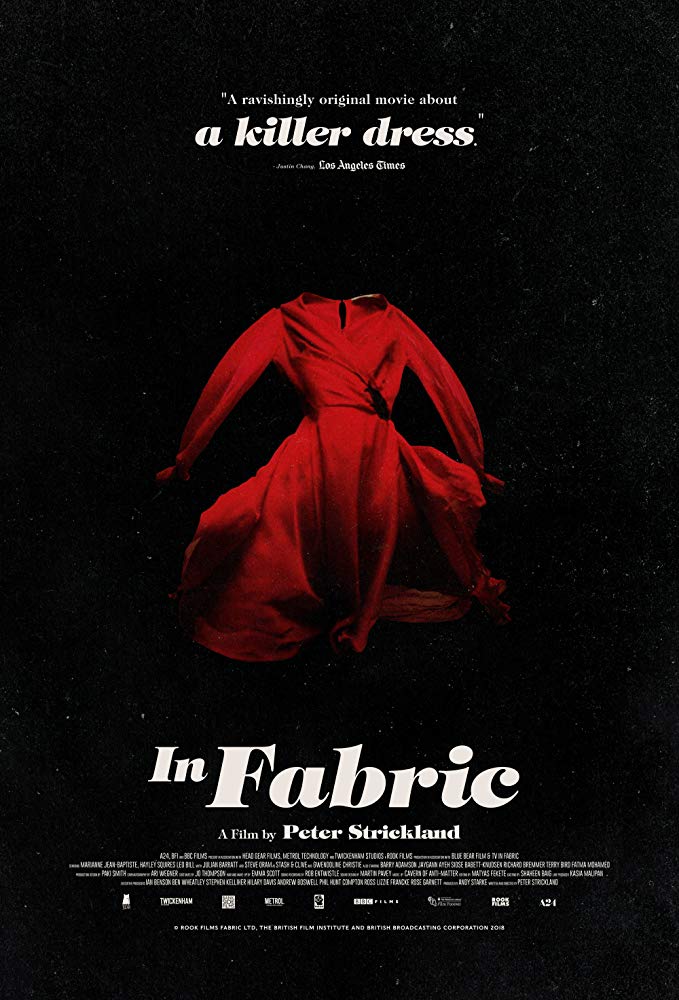 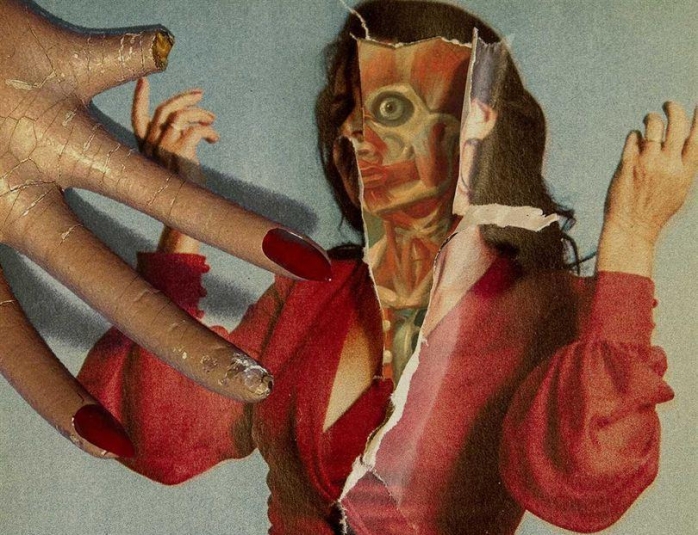 There are several strands that make up  In Fabric, some making perfect sense, others incredibly disturbing –  the film uses nightmare logic, where the opposite of what makes sense is exactly what happens. To begin however, the world we see looks quite normal. A single mother in her 50’s is looking at ‘Lonely Hearts’ ads to find someone, since she is now separated from her husband. This is what leads her to a particular clothing store; the TV advertises a sale at a clothing shop in a thoroughly hypnotic way: 80’s looking colours and synths drench the ad, drawing her in. She decides that this is the shop she can find something for a possible date. Arriving at the shop, the saleswoman appears, looking inhuman, wearing a strange looking dress and an intense stare. Eerie makeup and a huge head of hair complete her villainous persona. She could very well come from a David Lynch film. The store has only has the one dress that Sheila likes, but it isn’t her size. This woman encourages her to try it, speaking in riddles and proverbs. Sheila somehow fits perfectly into it the dress to the woman’s delight. She asks for her full details, as well as what the dress is for. Sheila hesitantly tells her of the date she is going on. Telling her that her dates’ name is ‘‘Adonis”, the woman replies by telling her without doubt that Adonis will compliment her dress, that is after she spins more poetic sounding lines that have a hint of passive-aggressiveness to them. Confusion seems to be her goal as she sells the dress to Sheila. Despite some teasing from her son, Sheila goes to her first date a little more confident wearing the dress. However, unlike what she was told in the store, the date is the epitome of awful, as a completely disinterested man sits across from her, staring at a menu, not noticing her dress at all. All he says is an ambiguous comment that she doesn’t look like she did in her picture. Still staring at the menu, Sheila tries to make conversation with him, and Adonis consistently gives her one word answers, the type of answers that can drive any person insane if they are trying to meet someone new like this. He ends up frustrated, asking her if her questions are some kind of exam. She backs off and orders her food. The rest of the date isn’t shown, the awkwardness of it is left to us to ruminate on. When Sheila gets home she finds that a nasty rash has formed on her upper chest. She then throws the dress into the washing machine, which shakes and vibrates around the laundry, somewhat reminiscent of the refrigerator scene in Requiem for a Dream, though this is somehow more disturbing as the washer continues to jump around despite being unplugged, and Sheila is badly hurt trying to stop it. She knows that something isn’t right with the dress, that it has a past of some sort which she eagerly tries to find clues about. Still though, she keeps the dress and the nightmare logic begins to take over. At her job, she is called in to see her managers, who condescendingly compliment her hard work, but they have a problem with her handshake. They also take issue with her bathroom habits, leaving Sheila again confused and upset. Life at home also takes odd twists, her life now seems to be spiralling out of control. The dress is a constant motif, appearing throughout – sometimes floating of its own accord, sometimes simply being worn, though it becomes malicious as it moves easily by itself. It is also of a very strange nature, not just because it is flying around, it even moves in rhythm with the sounds of Sheila’s son and his girlfriend having sex. The dress then is obviously haunted, which is what Sheila yearns to find out.

In Fabric isn’t subtle in its social commentary, essentially making it clear through conversation, however conversation may be the wrong word, as the saleswoman talks at Sheila with more profound sounding nonsense about the quality and pride in being a consumer. Meanwhile, the very first scene is telling, which sees Sheila is in tears out of view, but when called to assist a customer, she is quickly ushered right back to her seat without thought. And what is her job? A bank teller. Sheila does once try to return the dress, to the disgust of the woman there, while on her way out – still with the dress – an older man who the woman constantly consults with talks to Sheila as she tries to leave, he also talking in riddles, mentioning consumerism and the importance of it. This importance plays out: Sheila doesn’t really try to get rid of the cursed thing, her new purchase, hew new possession to keep her happy.  But the story is not a pleasant one, emphasised by the effectively nightmarish organic editing and effective but limited use of slow motion and sudden fast moments. This all makes for a film that is easily the most ‘Lynchian’ movie created in some time, if ever, which is no small compliment. It isn’t difficult to figure out what Strickland is saying, but this is far from the point. These comments on consumerism, and capitalism in general, are ideas that are second to how Strickland uses the real word concepts to create his very, very warped idea of potential consequences for such actions: greed being the most pertinent as we see customers excited and unable to wait for the doors of the shop to open, rushing into the store to find a bargain, acting irrationally, which is unfortunately a realistic phenomenon. Contrasting the happiness of the shoppers, the most memorable moments are extremely disturbing body horror scenes that are legitimately, sexually repulsive. The old man and woman have a very strange obsession with mannequins, which of course plays into the film’s overall message. The nightmare doesn’t cease, as it’s nightmare logic continues to dictate what happens. The film itself could be a real-life nightmare of the entire western world, as we buy and consume when what don’t need, but the rush of a new purchase cannot be denied. The fact this is a nightmare is somewhat confirmed, as every time a dream is brought up, it is referred to in an unnatural way: a ‘sleeping dream’, as opposed to a living nightmare, which In Fabric certainly is. These ‘sleeping dreams’ are clearly nightmares considering how they are presented. This constant hallucinatory presentation is a definite priority over the film’s comments on consumerism, though of course both elements combined is why the film works as well as it does; the engrossing, and intensely gross, consequences make it near-impossible to not think, a little at least, about what we buy and whether we needed it. 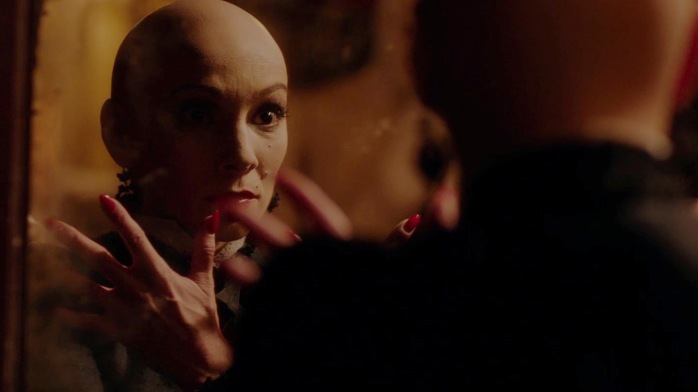