The second half of this year has seen Netflix firmly establish itself as a home for quality independent films as well as larger picture’s such as Scorsese’s The Irishman or The Coen Bothers last film.

I Lost My Body is an art-house animated picture, and to my knowledge, animated film originating from France isn’t exactly a well established phenomenon – I can’t say I could name a single title falling under this banner. The Red Turtle, an animated film written by Michael Dudok de Wit who is a fellow European – a Dutchman to be precise. The idiosyncratic story-lines of both films that subtly make their points, usually in existentialist and emotional ways suggesting that European animation/stories differ immensely from their Japanese counterparts.

While animated films inevitability are compared to the work of Studio Ghibili, which is inevitable if we are honest, but this film uses animation that explores new and interesting directions that are a credit to the creativity of the animators and everyone involved. Don’t get me wrong – this is no Your Name or Weathering With You. But importantly the style of the animation is unique and it is obvious that many hours went into creating it.

This surreal story is very layered – the main character Naoufel experiences a roller-coaster of emotions, chastised at his work, miserable delivering pizzas. This does lead him to meet Gabrielle – via intercom. Naoufel decides that he in love and does everything he can to be near her, obviously afraid to approach her directly – he even decides to take a job working with wood as Gabrielle lives in the same building.

Meanwhile a severed hand is determined to find its owner, once it gets out of its plastic prison. It soon gets its feet under… er, its fingers steady underneath itself, learning to walk and eventually becomes almost acrobatic in its movements. Quickly exiting the building it was bagged in, it already has the sense to avoid guards at all costs. There is some light humour to be found here, especially one scene involving a pigeon, but the hand’s journey is one fraught with obstacles. The hand refuses to quit.

A sense of longing now looms over the film: the hand is desperate to find its owner, while Naoufel pines over Gabrielle, still unable to approach her to tell her how feels. Perspective plays a subtle role throughout, as we often see the severed hands point of view as it makes its hazardous journey to its owner, which it somehow knows the location of.  This concept of perception plays a much larger part for Naoufel, as it soon becomes obvious that the way he perceives the world isn’t quite right. His final project – a surprise for Gabrielle – challenges our perception as it doesn’t seem to make any sense. But how does Naoufel see it? We never find out, and it is certainly a head-scratcher.

Everyone has Netflix these days, right? This hidden gem is only a few clicks away! Get on it!!

Films such as this are rare, so it is fantastic to see it on Netflix. It is an obvious passion project, with clear dedication and heart – this film is a rare gem, offering commentary on a near limitless amount of topics regarding the human condition, as well as existential questions pondering that stem from from the actions of both the hand and Naoufel.

The hand is the key to the story, and again, how can we unlock its mystery? Given the hand is instantly aware of danger and is willing to take risks in order to find its body. What is this saying? Perhaps it is saying nothing at all. Or perhaps it is showing us what we are capable of. If a hand can accomplish this, then why am I sitting on my backside all day?

It is however a tale that is very much worth watching. 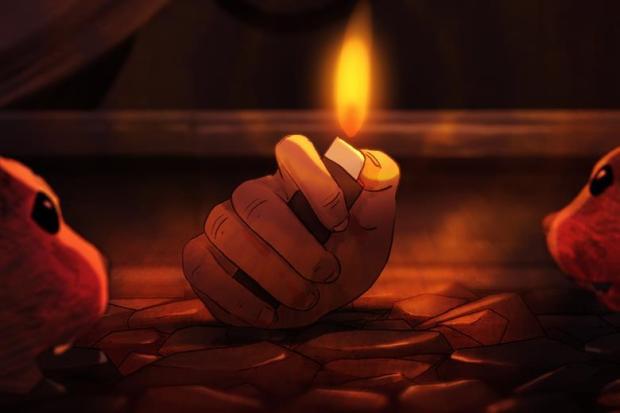