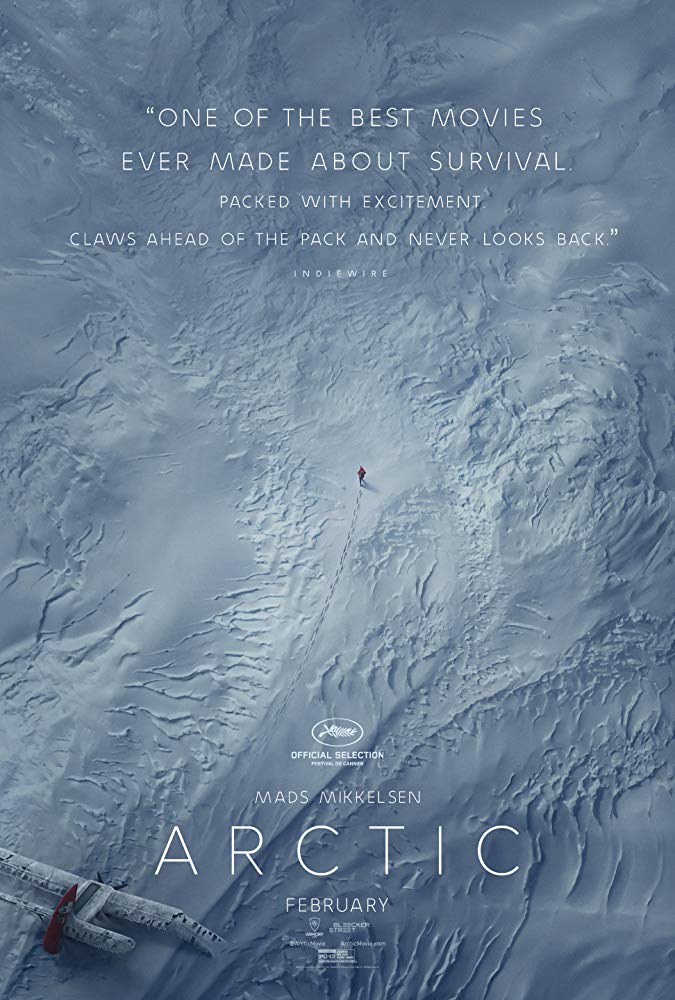 Writing a synopsis of Arctic is a simple task: unsurprisingly it is about a man trying to survive in the icy, windy, almost alien world of the Arctic Circle after crashing his plane. Mads Mikkelsen is excellent in depicting such a situation. Unsurprising, Mads does not disappoint.

Amazingly, director Joe Penna was originally considering an even more inhospitable environment to base this film in – Mars – but the idea was shelved when The Martian hit the screens. Sometimes a change in situation is for the best, and basing the film in this scenario works in the film’s favour. Not only is the snow a more believable place for the story to take place, it also offers more options regarding his survival and where the story can go.

In the video-game world, the concept of extremely tough conditions requiring wits and creativity to survive is becoming increasingly popular. Of course, we have seen similar ideas in film, The Revenant being one recent example of many.

However, Arctic is pure: survival is the only thing that matters for its admittedly short run-time. Much like the aforementioned video-games, it is survival where there is no winning. Just pain and hard decisions.

Overgard (Mikkelsen), seems very prepared for the task and from his looks it could seem that he has been here for a long time, though we are left to only guess. Early into the film, he finishes kicking the letters ‘SOS’ out of the snow, big enough that it can be seen by air. But is this is first attempt, or has he been doing this every day after snow falls? For weeks, for months? There are no answers, leaving the viewers’ mind to roam free and ponder on this notion.

A film such as this depends on the lead actor more than anything else, and Mads makes it seem effortless, despite being in every scene with very little dialogue to work with. Mads’ acting beyond words, his body language and facial expressions are nothing short of incredible. Despite this, we can only wonder what is really happening in his mind.

Overgard’s ability to avoid starving are nothing short of stoic, amplified by the fact that he has landed in an area where snow, and only snow, can be seen in every direction, as far as we can see and surely continuing over the horizon.

Arctic was actually shot in Iceland, and it convinces in looking like the Arctic Circle. It is difficult to picture a harder place to stay alive, let alone in reasonable health and with energy to spare, which we see when he is charged with an extremely difficult mission in the second part of the film.

The simple story suddenly challenges the obvious selfish methods in which Overgard has had to implement to clutch onto to survival. Ultimately, the mission will reveal his true personality after being alone for so long.