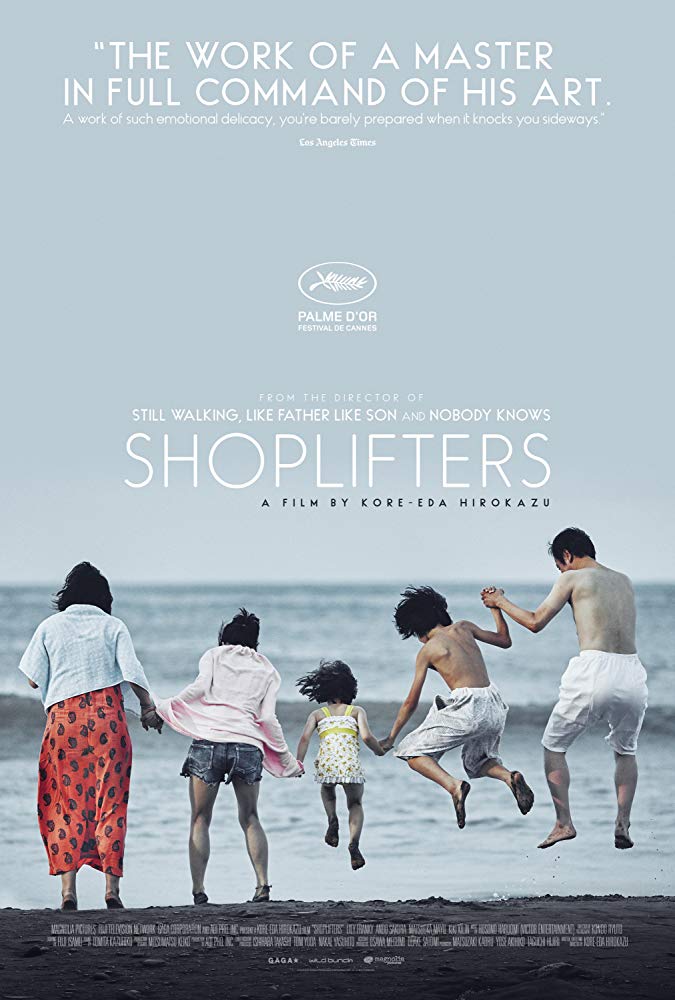 or over a decade, Hirokazu Koreeda has been playing with family dynamics, testing the notion of nature versus nurture; the link of DNA and how strong, or weak, it can be. While it may seem like he is repeating himself, each time he manages to spin the concept in a new way, and while doing so he easily establishes engaging characters and scenes.

Shoplifters is no exception, beginning with a child of about 12 and an older man stealing from a shop together in an obviously practised and choreographed manner. Immediately, questions are raised: what his their relationship? Why has an adult taught a child how to steal? Following this quick scene we meet the family, the exact connection between each member is unsure, though these connections unfold gradually throughout the film. In the rundown flat they live in, there is a grandmother, a mother figure named Noboyu, whose partner Osamu is the man we first see in the shop. Another member of this family is Aki, a teenage girl who is doing whatever she can to help the family, and last there is Shota, the young boy we see to stealing in the shop.

While his relationship with Osamu seems to be solid and positive, Shota hesitates and struggles to call his adopted father ‘Dad’, Osamu yearning for this connection, even if it is only by a word. The film deeply explores other family relationship issues and how they can skew or change in an instant, not to mention the family bonds that can be formed without a blood connection.

Early in the film the family decides to adopt a young girl whose mother is clearly neglecting her. Her presence complicates things further, as her disappearance soon dominates television screens. Unlike Shota, she quickly becomes attached to this family that seems to have been randomly stapled together, with nothing but circumstance to connect them. Or is there more? Does Shota enjoy stealing? What is the core reason for Shota’s hesitant to call Osamu ‘Dad’. Not to mention the situation for the children: they can either stay with this family or go sleep in a car.

The entire film is perfectly constructed and ends with a final act that raises yet more questions, but answers them subtly with the aid of perfect performances by all involved. The final act of the film again raises many questions, answering some while leaving other aspects of the story ambiguous. This is especially apparent in the ending, a juxtaposition that can seen as a summary of the entire story. Under the power of the story and the bonds formed, the film has strongly made its point almost under the radar.

Beyond the poverty, beyond the messy apartment, Koreeda has infused a sense of doubt within the family, doubt that is very subtle and difficult to pin down with a simple statement. It seems to linger within every character, as if the the family’s connection is constantly at breaking point. Whether it is Shota’s reluctance to call Osamu Dad, Aki’s day job, the constant news bulletins of the child they kidnapped in the media’s eyes; these mount up in the background.

However, the kindness of Osamu and Noguya is what holds them together, a feeling of true, unconditional love, which all the children have never felt. Despite the messy apartment, this overwhelming feeling of love and care keep the family together. This seems to be Koreda’s belief: that unconditional love and true kindness can be more important and safe that the link of DNA.