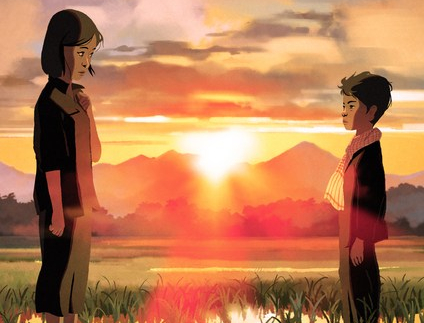 There are countless films that depict horrid acts against entire countries and populations. However, there is not a large amount of such films that are animated. Depending on the style of animation, the atmosphere of the catastrophe can be controlled with a pencil. In Funan, the animation is certainly drawn in its own style, with some influences from Ghibli. However, this looks different from any of their films; the style is actually quite basic, no flourishes or anything different. This almost bland animation is a perfect juxtaposition against the horrid events occurring. An intriguing idea that hooks the viewer in.

On screen, this is a comparatively unknown story compared to atrocities in Russia and China. Cambodia was invaded by Pol Pot and his Communist/Maoist Khmer Rouge regime in 1975. The entire population of Cambodia were forced out of their cities into the countryside, watched by armed guards. They were malnourished and thrown into forced labour as families were separated. The speed of their labour was constantly monitored, with punishment hitting innocent citizens who were working their hardest.

When they were ordered to return to their homes, they again were forced to march, with families again often separated. This forms the story, as a couple try their hardest to find their child who they lose in the march home. Their efforts are futile as the guards do not care about a separated family. As a communist state, their child is supposedly being taken care of by the leader of the regime.

Once home, starvation and disease are again rampant. Perhaps the most depressing aspect of their return is that many children are indoctrinated into the Communist/Maoist beliefs, some becoming guards themselves as the rest of the population work all day in the blistering sun, guards again punishing those who, in their mind, aren’t working fast or hard enough.

All these barriers create insurmountable obstacles for the two parents to find their son, as his location is never certain; they are told of differing locations constantly. Of course the guards have no empathy for their situation. There are other small plot elements that do not distract nor do they feel incomplete, serving as examples of the desperation of the population, who lived in these conditions for four years. Most of these revolve around the citizens both when they were forced out of the city, and then forced to work all day once back in the city.

The balance between the awful events and the story is handled well, as neither dominate the film over the other, and the two occasionally cross paths. A film filled with desperation, guilt, hope,  distress and myriad of other human emotions, Fumar takes the viewer on an emotional journey where nothing is certain, the regime implemented impossibly cruel, with ever citizen suffering unless they succumb to the belief system implemented. The final act is one of conflict and misplaced hope, culminating in a satisfying ending. A genocide that is perhaps not as talked about as others, this film shines a bright light on it, the suffering depicted in a unique pencil style that somehow enhances the impact.

So, so close to a full sixer. Still, one of the best animated films in recent memory, excluding Ghibli films.