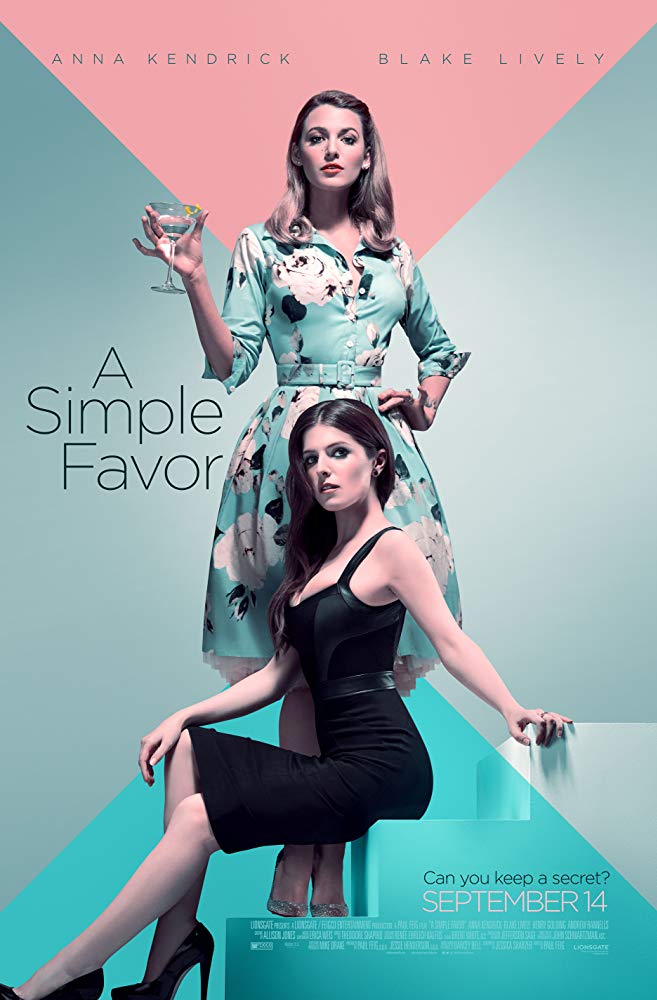 Somewhat posing as a mystery/thriller film, A Simple Favor could have been a disaster if it took itself seriously. Thankfully, it realises the slight silliness of its plot, and as such the twists and turns the film takes are often darkly humourous, aided by a funny yet on-point script that is delivered pitch perfect by Anna Kendrick and Blake Lively.

Stephanie (Kendrick) is a single mother, who has a video blog where she shares cooking tips and other advice for her followers. Her vlog is aimed at fellow single parents, as she is a lonely, single mother herself who is too nice for her own good. After her son and another boy get along during class, she meets the other boy’s mother Emily, who the other parents talk about in gossipy whispers.

Her entrance into the film is executed perfectly, as if she were Clint Eastwood. Wearing a wide brimmed hat and and holding an umbrella, her face is completely obscured. As she walks forward in what seems like slow motion, an umbrella rolls end over end in front of her; a tumbleweed blowing across the plains. It is a strange but apt Western touch: this introduction is appropriate considering the personality that she possesses.

Once the two meet and realise the two boys want a play date, they all go back to Emily’s place for drinks while the kids play. Stephanie is in awe of the beautiful house Emily lives in, though Emily seems to resent it. She is a very straight-forward, no bullshit type of person, and this extends to how she talks to Stephanie. It isn’t long before the naive Stephanie has drunk too many martinis. She is now more talkative, and we learn about another side of her personality, while Emily watches her closely, studying her facial expressions as she confesses a secret after Emily confesses one herself.

It is clear that Emily is a cold person as stories about her behaviour circulate throughout the circle of parents, but Stephanie is a lonely single parent and despite barely knowing her, she suddenly considers Emily her best friend. This is unfortunately an accurate depiction of single mothers who feel lonely in the world. The film exaggerates the point for the sake of plot and laughs, but it is addressing a real issue.

After Emily asks the simple favour of picking her son up from school, she disappears, and the search begins. Her colleagues don’t know where she is and don’t seem to care. Her husband Sean becomes involved when it is clear that she has vanished without any explanation.

Stephanie becomes frustrated with the lack of progress, so she begins to poke into Emily’s past, something Emily was extremely private about, even with her husband. Before she disappeared, Stephanie took a photo of Emily as the kids were playing, and Emily’s reaction to this was far from pleasant. She is a very interesting character, and the film plays out with many interesting twists and turns, perhaps too many, but the conclusion is satisfying while maintaining the incredibly dark humour that is the glue that holds the film together.

The twists jerk the viewer and will often skewer what originally seemed to be the case. It certainly keeps one guessing until the very end. And due to some aspects of the search for Emily, there are some interesting points to chew on if one is inclined. The internet is certainly awash with such videos and thoughts. It is easily one of those flicks you could watch many times over.

Despite the mystery elements, as mentioned, a very black sense of humour holds the film together as it zig-zags through its borderline-silly plot. There are many memorable one-liners, a wink to the audience, telling us not to take what is happening too seriously.

The casting couldn’t be better as Anna Kendrick and Blake Lively share amazing chemistry, Anna playing the too-nice-for-her-own-good single mother who is willing to help anyone, while Blake plays the dark and mysterious woman perfectly, with the aforementioned entrance a perfect introduction to her character.

It is hard to find fault here. There are arguably too many twists, but the sense of humour seems to aid in making all of them work. This is a funny, at times tense and incredibly polished film, with a soundtrack filled with funky tunes as well as some moments with a traditional score to add atmosphere to the more tense moments. It is a perfect combination as the songs chosen aren’t hits that everyone will instantly know. They vary from laid back jazz to aggressive hip hop, and again remind us that this isn’t a serious film.