Alex Garland’s second directorial effort again lands itself in the science-fiction genre, though this time around it is not as easy to explain. The synopsis for the film doesn’t show any of its cards, simply stating that, “A biologist signs up for a dangerous, secret expedition where the laws of nature don’t apply.” This is an experience that requires all your focus. Don’t Blink. It is a mind-twisting science-fiction experience like no other. The creativity shown is an incredible achievement, not to mention the unique visual effects and an incredibly effective sense of dread that rivals the best of thrillers. 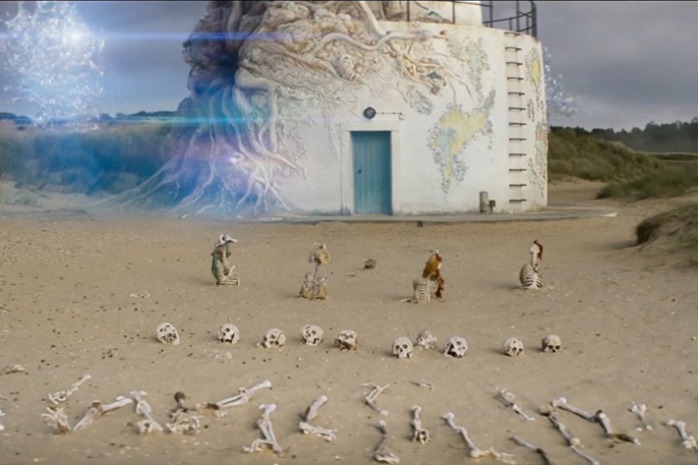 The film starts with a spin on the cinematic trope of the last moments of a story being shown at the start, but we are given no information. Lena (Natalie Portman), the biologist, sits in a sterile room, looking confused, as men in white hazmat suits question her about the mission that makes up the main story. She can’t muster an answer other that ‘I don’t know’ to almost all the questions she is asked. The film then seamlessly transitions to her life before the mission, as she teaches a biology class.

Having not seen her husband for a year, assumed to be dead, she decides to paint their bedroom. As she is doing so, her husband Kane (Oscar Isaac) silently walks up the stairs and appears at the bedroom doorway, staring through her. A memorable shot of her clasping his hands at the dinner table is shot through a glass of water, aptly displaying that Kane has changed somehow. He is suddenly taken away by an ambulance, severely unwell, and she is given a sedative to knock her out.

Soon she finds herself in what looks like a hospital, disorientated. Dr. Ventress (Jennifer Jason-Leigh), a psychiatrist, eventually walks in to explain what has happened. Something struck the earth at a lighthouse, and the ‘Shimmer’ it emits is growing. With many theories and no facts, and every person sent in never returning, she volunteers to join another mission into The Shimmer, this time with less of a focus on military as the group is made of female scientists.

The five women enter the Shimmer, where anything can happen next. Almost immediately, Lena is opening her tent that she nor any of the others can remember setting up. Four days have passed. They find that their compass is spinning wildly, and that is just the first of many otherworldly events that happen in this place that truly does seem like another world.

The laws of nature not applying is an understatement, as there is something very wrong with the ecology of the place, as we see different species of plants growing as one, a deer with plants on its antlers. There is cellular mutating everywhere, and as the group ventures further into the Shimmer, there are sudden bursts of action to stab into the tense atmosphere and terrific score. There are certainly moments that are legitimately scary, a video they find in particular is haunting. The strange ecology manifests itself in increasingly unsettling ways, culminating in a final act and ending that can be chewed on for days.

This film sticks with you. You want to see it again  because the ending left so many questions,. What will happen to Lena and Kane. What exactly was the shimmer?

Does the lighthouse represent anything? Was it trying to help us evolve? The world of the Shimmer is so interesting, so unique and it doesn’t make anything obvious. It is truly otherworldly, like another planet that has a Shimmer that eats all cells of kinds, and builds a world much like what is seen as the movie. This is a film I could watch over and over.

Seven out of a sixer. An unforgettable film.