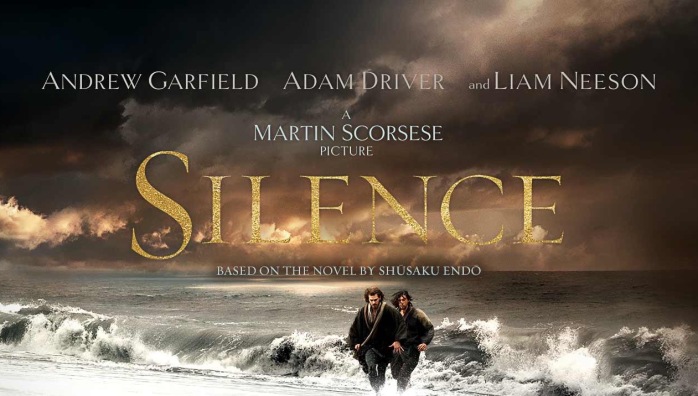 After the rampant Wolf on Wall Street, Silence seems at complete odds with its predecessor. But the two films share a similar theme; there is no denying that both involve a selfish idea of wishing to spread one’s culture. First it was money, the capitalist dream. This time, it is religion, with a lead character as steeped in his faith as Jordan Belfort was obsessed with money.

Most know Silence is a film that Scorsese has been wanting to make since the 80’s, based on the book of the same name written by Shûsaku Endô. Acquiring the rights around the end of the 80’s, the powerful story has been lingering in the master’s mind since. Having finally brought his dream to life, Silence serves as a visceral and powerful reflection on the clashes of culture, religion and moral beliefs, and the consequences thereafter. It also demonstrates that perhaps all religions aren’t as different as we think.

Fathers Rodriguez (Adam Garfield) and Garupe (Adam Driver) travel to Japan to confirm a rumour that is deemed vicious by the Catholic Church: their teacher, a prominent member of the Church, has apostatised. Their mission is steeped in faith and faith alone, as it is hard to see a positive outcome. It isn’t hard to see this suicidal quest as similar to the religious zeal that terrorists harbour. Of course the intentions couldn’t be more different, but it is an unwavering faith that drives them.

Apostatising is a shameful thing for the truly dedicated, but what does it really mean if your core beliefs, your inner values remain intact? This predicament is a powerful demonstration of the harsh doctrine of Catholicism in this era, in which simply publicly denouncing one’s beliefs while privately holding onto them closely is considered shameful and unthinkable for a man of their teachers’ status.

As soon as the two priests reach Japan, thanks to a guide who allegiance is never clear, the two wrestle with their faith, seeing the secretive conditions that Japanese Christians are forced to live in. Soon word of another village harbouring Christians reaches them, and the two priests split up in an attempt to help as many people as they can. For these local Christians, a simple, crudely made cross is enough for them to feel content. But do the pair clearly see why these people are forced to live this way? Or are they simply fulfilling what they feel is right; ultimately a selfish act?

The film focuses on Rodriguez for the most part after the two split up. At times, he sees the image of Christ as his reflection. Is he dedicated only to his religion? Or are his true intentions more selfish? Is martyrdom what he wants? Furthermore, is he conscious of any of these thoughts, or do they lurk in his subconscious, plaguing his dreams?

There is a key scene just before Rodriguez is found by the Japanese authorities. Rodriguez drinks from a spring, and when he stares at the water, he first sees Jesus, but this image slowly distorts into a ravaged, crazy looking reflection of Rodriguez, who begins to laugh maniacally. He is at war with himself, and as he learns more about the situation in Japan after being captured, his character progresses through a wealth of emotional changes, from devout faith and devotion, to doubt and despair. The silence for him is deafening, as his prayers are never met with an answer.

His journey is filled with a strange passive-aggressive style of persecution. It is a Buddhist culture – they claim that they don’t want to kill anyone. But their faith is just as strong; they firmly believe that western culture can not thrive in the ‘swamps’ of Japan. To force a religious belief on an unwilling country is wrong, made worse by the fact that the few Japanese Christians in hiding are ignorant of true Catholicism.

At one point a Japanese official laughs at Rodriguez, explaining that the locals have no idea about the Catholic idea of the Lord. They do not know anything about Catholicism at all, their faith proving to be a warped combination of Buddhism and Christianity. These are the people that Rodriguez wants to save, but his mere presence puts local villagers at risk. The authorities have no qualms about torturing Rodriguez in this sense, persecuting the villagers who refuse to apostatise, and their refusal to do this is again mostly due to Rodriguez’s presence alone.

Technically, the cinematography is flawless. Whether it is the amazing natural landscapes, or the purposeful movement of a camera from the perspective of a trapped prisoner, nothing feels forced. The film looks impeccable without trying. In terms of brutality, the film is restrained, causing the very few confronting scenes to have a heightened impact. There is also a very muted soundtrack, often eastern influenced to appropriately accompany the Buddhist religion of Japan in this era.

Every word is meaningful; despite the length of the film, no line is wasted. The use of smoke is also powerful, as at times it acts as a visual metaphor for the anxious nature of the villagers; hindering the visibility of approaching potential enemies. The acting is so powerful that we hang on every word or action. Garfield is simply incredible, fighting to maintain his faith while his Lord remains silent.

Scorsese has finally brought this novel to life, and it perhaps is his finest work to date. His direction is flawless, and the performances of the many Japanese actors

must be noted. Scorsese loves Japanese film, and this is evident in his casting of the indigenous population, and his incredible knowledge of Japanese history. Nothing feels out of place; even the wavering Portuguese accents of Driver and Garfield have little negative effect as the acting from all involved is powerful. The final act will surprise, and can be looked at from multiple perspectives. The film ends with a memorable and poignant shot, just to add another layer onto this epic experience. Some questions are answered, but perhaps just as many questions are posed. A perfect ending to a perfect film.

A full sixer, and perhaps Scorsese’s best yet.