The Sixth Sense was no doubt a brilliant movie. Perhaps it is the quality of this older work, and the lack thereof within his recent work, that had folks praising his last creation, The Visit, as a ‘return to form’, despite the fact it, among its other glaring flaws, rather obviously used dementia as a stepping stone for scares. This smacks of lazy writing (from a self-proclaimed ‘writer/director’), and we see the same thing in Split, which centres around Kevin, a man suffering from with D.I.D. (more commonly known as multiple personality disorder) and again, this is the launch-pad for his story, which is simple: Kevin has a ton of different personalities, and one has decided to take over and kidnap some teenage girls. Well, perhaps it isn’t quite that simple…

There are many movies that explore this disorder and the cinematic possibilities it offers. The problem with Split is that it tries oh-so-hard to legitimise the disorder via a lot of time spent with Kevin’s doctor. Yet at the same time, supernatural elements are teased at. Trying to present the reality of D.I.D, a vastly misunderstood disorder, while simultaneously referring to supernatural elements, is idiotic, and just a tad insulting to the community of folk who already have to deal with the stigma that surrounds mental health. This film certainly won’t be helping in that regard.

A horror film about a person with mental illness is one thing, but when that film bastardises what that condition is, and further from that, actually uses it as the butt of most of the humour? Is this a new sub-genre of exploitation cinema?

This incredibly over the top presentation of D.I.D. is perfect for a film, for fiction, not to mention being the perfect vehicle for McAvoy to show off his chops. But as said, the film is trying to have his doctor explain the illness. To convince people it is real. Yet the different personalities we see aren’t just absurd, they are laughably unrealistic and literally caused many fellow audience members to laugh aloud at how silly the presentation was. Laughter kills tension and fear like nothing else, and it succeeds here, replacing many a suspenseful moment with a ‘hey, look how silly this man is dressed! And he has an English accent!’ type moment, killing any trace of atmosphere.

The third act is where supernatural elements come into play, and the less said about it, the better. If this was the direction M. Night wanted to go in, avoiding to try and explain to the audience in detail just what D.I.D. is seems like a no-brainer. But if he did want to do that, all supernatural elements should have been shelved entirely. Unfortunately, this isn’t the case. As for this film’s final ‘twist’…. Again, the less said, the better. Not only is it underwhelming, it is infuriating and feels very much like M. Night didn’t know how to end his own movie.

Despite making a complete mockery of D.I.D. by trying to legitimise it while simultaneously presenting it in an absurd, exaggerated and almost insulting fashion, this film isn’t a complete loss. M. Night has obviously done his homework, as he has enlisted the talents of West Dylan Thordson, who has composed a brilliant horror score that doesn’t manipulate its viewers, rather inducing a sense of dread with its deep, stringed sounds, almost as if someone was torturing a double bass. Anna Taylor-Joy, fresh from a fantastic performance in The Witch, is on board as the only captive with a semblance of a personality. The film has also been shot by Mike Gioulakis, who previously worked on It Follows. Shayamalan has been doing his horror-homework, but without the writing talent he seemingly once possessed, this homework was a complete waste of time.

God knows what someone suffering from this awful affliction would think of this silliness. For example, one of his personalities is diabetic, requiring insulin shots! Never mind that shooting up insulin is a good way to kill yourself, one of the 23 personalities believes he has diabetes! Yes, it is only a movie, exaggeration is to be expected. But to suggest that a single personality can require insulin but the others cannot? Tying supernatural elements with commentary on a real, horrible mental disorder, and further from that, attempting to legitimise it?? It would seem then that M. Night has done as much as possible to sabotage his own film.

The structure was there for a claustrophobic thriller. M. Night unfortunately turns it into an awkward comedy that isn’t tense at all, and much like his last effort, a lot of the comedy is the audience laughing at how absurd the situations presented to us are. There are very few legitimately funny moments… but hold on a sec’, wasn’t this supposed to be a horror movie? 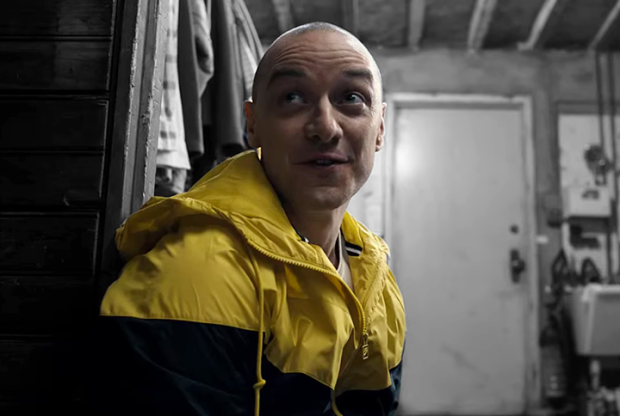 Another one for the bargain bin. But hey, it was slightly better than the intolerable The Visit. And that brings us full circle. Would anyone be bothering with his last two movies if an unknown

name had made them? Would the critical reception be different if he hadn’t failed so bad previously? A ‘return to form’ can be a very, very different thing from a decent, solid flick, which this certainly is not. McAvoy is essentially the only thing worth watching, though it is hard not to laugh at how absurd the personalities created are. It is also hard not to laugh at the entire last 20 minutes, as what was a solid but flawed film turns into an absolute mess of half-finished ideas.