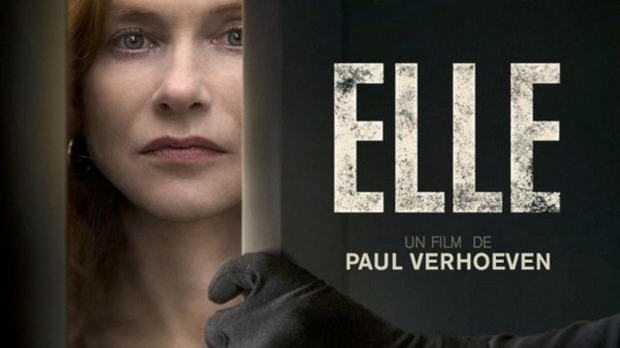 Written by: Philippe Djian (based on the novel by), David Birke (screenplay)

An extremely unique spin on films involving rape, Paul Verhoeven has crafted a rather unforgettable experience, thanks to a well-written script and a stern, memorable performance by Isabelle Hubert as the titular character. Elle’s strong nature is instantly imprinted into the viewer’s mind from the very first scene. Though re-visited in a more graphic way via flashbacks, the film starts with Elle being raped by a man wearing all black and a ski mask, but what we see the most of, rather amusingly, is her cat’s disgusted reaction.

This confronting opening immediately hooks you in. But she soon seems to shrug it off, and when greeting her son later that day, she makes no mention of the extremely traumatic experience she just went through. It instantly shows us the aforementioned strength and resolve of Elle, and we later find that she doesn’t want to deal with the police because of an extremely dark childhood that obviously lingers in the back of her mind at all times.

She eventually tells her friends about the incident, who insist that she report it. But multiple times she tells her friends that she is not dealing with police again. Not after ‘last time’. The reason for this is explained later into the film, and while in retrospect I suppose that reason could be seen as predictable, I certainly didn’t see it coming. But then again, I don’t think predictable is such a bad thing, in certain cases at least, and especially in this film, as there are many scenes where you will think you know what is coming, but you’ll be dead wrong.

Elle is an incredibly deep and well written character. Her strong personality is very much on show at work, where she has founded a company that is trying to get the attention of Activision, a major gaming distributor. She is mostly hated by her employees, but she doesn’t care. She also has some other odd quirks in her personality, such as her overly casual demeanour regarding a friend’s husband/boyfriend who she is having sex with.

Her work environment is most prominent in the first half of the film, where at first the film seems like a simple ‘whodunnit’, as her workplace is filled with candidates. The release of an animation from the game, a rape scene, with her face plastered over the villain’s head, makes matters even more interesting, not to mention incredibly funny in a very dark way.

Where this film veers into more unique territory is that, during a repeat attack, Elle manages to get a hold of a pair of scissors, skewering her attackers hand. She immediately recognises the voice when the man reacts in pain, and is shocked to find that it is someone that she knows. But rather than opting for revenge, she allows it to happen again, perhaps due to her traumatic past. What follows are some very dark and fascinating mind-games as the two act as if nothing has happened when around other people.

While the ending lacked the punch I was hoping for, the second half of the film is packed with strong emotions that lack any melodrama whatsoever, not to mention that everything preceding the ending is infinitely fascinating, dark, and violent. Elle is such a unique character! Her relationship with her mother makes for more amusing moments, while her relationship with her father is… Estranged, to put it lightly. Elle is a tough women, and the way she handles events defy how most would react to the situation, male or female, adding another layer to this psychological drama.

This is a film of two halves, and both are extremely interesting and engaging. Every character is well written, from her ex-husband and son, to her circle of friends, as well as her employees. Verhoeven has crafted a near-masterpiece as he defies conventions and keeps you guessing for the entirity of the film. Isabelle Huppert is simply fantastic, she brings this unique character to life in an intense way that few others could achieve. Some of the words that come out of her mouth can be quite shocking. Deep down she is a good person who is always looking out for her son’s well-being, but you almost wouldn’t know it considering the way she acts and talks. This a film that demands multiple watches; it expertly grabs you and refuses to lose its grip.

I feel like I’m giving high scores too often this year, but there has been so many fantastic films! A top ten will definitely be a challenge