Following the first scene, which is a risky move as it shows us a situation from near the end of the film at the beginning, but is executed in an intelligent and subversive way, we are in the thick of the action. Three friends are thieves and they do their best to get as big a score as they can. Executed well here is the slow reveal of information, as we piece together exactly what they are doing. These scenes should have been longer.

When they find out about 300,000$ sitting under an elderly war veteran, they see an easy target. Upon scoping the place out, which seems to be in a type of ‘ghost town’, they see the man and realise that he is blind.  Of course now all three have dollar signs bulging out their eye sockets. Robbing a blind man, what could be easier?

Obviously this is far from how the movie plays out. The three enter the home, and for the first time I have seen, they actually REMOVE THEIR SHOES before breaking and entering. The amount of times I see criminals or victims not taking their shoes off to make less noise maddens me!

While they try to be quiet, they aren’t quiet enough as they soon wake up the sleeping beauty. Old and battered looking, sporting a pair of dead, soulless eyes, Stephen Lang nails his role as the feisty blind man who has a thing or two to teach these youngins. He is one of the best villains I can recall in recent memory; I’ll be seeing his eyes whenever I think about movie villains.

Going into any more details would spoil the party, but it must be said that this subverts many genre tropes and clichés, and is not afraid to be gritty and dark. There are even a few dark jokes… That I think only I laughed at.

There are a few jump-scares scattered around though, which can get old quickly, but they are used in such a way that every time they happen, it furthers the narrative and often adds increasing intrigue to the story. This is all a great twist on the ‘home-invasion’ genre of movies, and one of the best I have seen in a long time.

What must be emphasised though is that this is not a horror movie. This is a thriller. A great one. But there is nothing horrifying to witness, apart from the blind man’s eyes perhaps, and despite the nail-biting tension, there is a surprising lack of atmosphere. This is helped somewhat by the subtle pumping score that adds to each scene, but the film certainly lacks a menacing atmosphere present in something like The Witch.

Upon walking out I asked an elderly couple if they enjoyed it, as I had heard them laughing a few times during the film. Surprisingly they found it quite comical; they enjoyed the film, but found the three friends shallow and their actions a little silly. They also emphasised what I though as I walked out – this is a good film, but it is not horror flick. 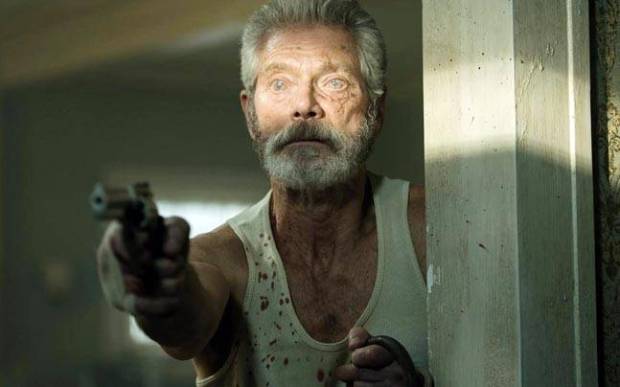 Don’t Breathe felt like it had two endings, but both of them were well executed, and again slightly subverted the norm. And while the editing here is extremely tight, I wouldn’t have minded some more

lingering shots, as there are a few incredibly orchestrated moving single takes that swoop around the invaders. It would have also been nice to get to know these three characters before they enter the blind man’s house though, as I said, the intro is disappointingly short. We get a glimpse into their life and what they do, but that is all we get. These characters are extremely thin, but a testament to the film, it is still extremely gripping and filled with suspense till the very end.

One beer short of a six pack