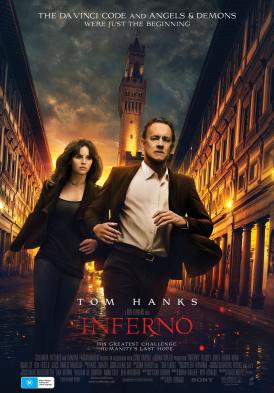 Written by Dan Brown (based on the novel by), David Koepp (screenplay)

Welcome to a movie that you have seen several times before. Many, many times before, done in many different and far superior ways. There is nothing new to be found here, nothing creative or fresh, and the editing and special FX especially are so infuriating I found myself wondering, are these people having a really bad mushroom trip while trying to create a film? What in the sweet hell is happening here?

The movie begins with Hanks having the FX filled nightmares, and the effects used makes the film feel like a horror movie, as we see many disturbing images. Again, I can’t begin to think what these people were smoking when they came up with this; it is so far-removed from what the rest of the film is like, it is almost hard to believe. And of course all the effects are so, so pointless. A reason to waste money on pretty looking images.

And that is where we hit the nail on the noggin: this movie is 100% pointless.

As I said, its a plot that you have seen a hundred times, and every one of those experiences was better than this abomination of modern cinema. The story is simple: a man has a mysterious McGuffin. Bad people want it and start hunting him down. Man travels around the world, trying to solve the mystery while running away from people shooting at him. Of course, his travels are absurdly easy, despite the fact we see high-powered agencies after him.

When we find out what the mystery is, the only words that come to my mind are… Creatively retarded. It really is just silly, laughable, even compared to the previous films. That they try to make it all sound intellectual by relating it to The Divine Comedy, Dante’s famous poem about the circles of Hell, is embarrassing. Not to mention an insult to Dante Alighieri himself. This movie does not have an ounce of intelligence, though it wishes it did.

The few actions scenes in the film are – in typical Hollywood fashion – impossible to follow.

Who is hitting who? Don’t ask me, it is a mess of terrible editing and a complete lack of long takes. It is as if the film-makers all have ADD and don’t understand the concept of a shot lasting longer than five seconds.

Honestly, this film is so laughable I am wondering if Ron Howard is going senile. His last movie wasn’t all that great, but this, this is a new low. The special FX are so over-the-top it honestly felt like money was being thrown at me, as it is almost all without purpose. Ron has it is all wrapped up in a story that tries its hardest to sound intelligent, but instead comes off sounding like a teenager who has just started reading about conspiracy theories and thinks David Icke knows everything.

I’m sure thought that it will somehow interest many people, much like the exceedingly average books that these films are based on.

What else is there to say? Don’t waste your time on this mess, please. It offers nothing new to the cinematic world, and is filled with so many

clichés you will find yourself drowning in them. The effects look good – that is about it – but again, it comes off as some kind of FX worker having a really bad acid trip. All these scenes are nightmares of Hanks. The actual story has none of this FX-driven ‘action’, and because it is so typical and predictable, no great acting performances can save it.

Watch at your own peril. I honestly feel dumber after watching this.

One beer out of a sixer. Utterly useless.