Wait. What?! This remake is actually better than the original? The original was a bloody good movie, meaning this flick has upped the bar not just for remakes, but for westerns in general.

And it is better than the original by a long shot. And that is saying something, given how good both the original film and Seven Samurai were. But Fuqua has somehow pulled it off, using an admittedly very politically correct approach it must be said, but he has done it, and he has done it bloody well! Kudos my friend!

When I first saw the run-time for this, I admit that I was a little worried. But by the time the final act came in to tear the audience into shreds, I didn’t want the carnage to end. I wanted more. The world of cinema needs more westerns, and this is a prime example of why the genre needs a full-blown resurrection.

Remember how in Fury Road, the entire movie was essentially three gigantic action set-pieces? Take away the first act of this, which of course is where we meet Denzel, along with the other six men, and what you are left with is a few brief gunfights that are brief but hard-hitting, and a final act that is simply relentless. I left the cinema satisfied, but damnit, I wanted more!!

The same basic story is here, no surprises there, but credit to the film-makers, this film stands out on its own. It deviates from both Seven Samurai and the original film. While there are a couple of lines that are borrowed directly from the original, and the original theme music is squeezed in once as a sort of homage, for a remake/reboot, this is remarkably creative and fresh. The slight nods to classic era Eastwood were also appreciated.

As for the acting, where do I start?!

Denzel is Denzel; he commands attention every time he is on the screen, and his introduction to the film is violent and memorable. Chris Pratt, who I’ve always thought of as a bit of a prat to be honest, actually delivers here; a nice deviance from the sort of goofy characters he normally plays. Sure, he does inject a bit of humour into the film, but it isn’t overbearing, and credit to Pratt, he tones it down and delivers a decent dramatic performance. Perhaps my favourite character though was the completely unrecognisable Vincent D’Onofrio, a god-fearing beast of a man who deserved more screen-time, as did the rest of the crew.

This is where the film falters first; obviously it is a challenge to give screen-time to all seven characters, but this certainly felt like Denzel and Pratt’s show, with the other five as side characters. I suppose this can be said about the original as well, but considering this has improved on the 1960 film in so many ways, it is a pity that we don’t see much of Ethan Hawke, Vincent D’Onofrio, Byung-hun Lee, Manuel Garcia-Rulfo and Martin Sensmeier, who has an especially small role. Hopefully this film will serve as a platform to give these men a chance in the future to shine.

Peter Sarsgaard makes the most of his screen-time, making for a believable villain, while many scenes are stolen by Haley Bennett, a strong women who refuses to back down and wants to fight amongst the men of the town for their land, for their freedom.

While the gunfights are a lot of fun to watch, much like almost every Hollywood action film I can think of, there are far too many cuts and not enough long takes, meaning the fighting feels fractured and it is often hard to keep track of who is being shot. It isn’t a deal-breaker, and the final showdown certainly isn’t lacking in suspense or action, but I couldn’t help but feel that it all could have been captured in a way that kept the action but also gave us a clear view of what was happening. Perhaps they intentionally went for this approach, as it does lend the film’s shoot-outs a sense of urgency.

But hey, perhaps I should quit being an arm-chair DOP, eh?

Apart from these little quibbles, there isn’t really anything bad to say about this. It is a ton of fun, it looks spectacular, and the sound effects work is brilliant, 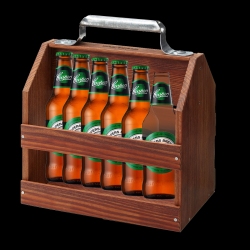 from the sounds of glass breaking to the constant shooting to the sound of horse shoes hitting the dirt. The score delivered by Simon Franglen and James Horner is also excellent – not intrusive, but enough to add to the atmosphere. As far as remakes go, this is up there with True Grit in terms of quality. It doesn’t quite reach the level that the Coens did, but it certainly delivers an entertaining, action filled flick that is not boring for a second. A two-hour-plus movie has never felt so short.

One a beer short of a sixer