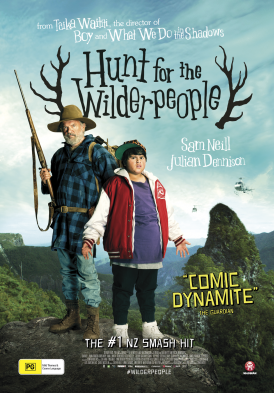 Written by Taika Waititi (screenplay), Barry Crump (based on the book by)

After the hilarious, infinitely quotable What We Do In The Shadows, Taika Waititi changes down a gear for this PG-rated adventure film that has a big heart as well as a lot of laughs. Adapted from the book by Barry Crump, Waititi brings the story to life in an almost perfect way.

Foster child Ricky Baker has been bouncing from foster home to foster home. Upon arriving at Hector and Bella’s house out in the bush, his first instinct is to run away. He quickly begins to warm to his new home, but soon into the film a tragic event causes Hector and Ricky to abandon the house, and in the following confusion, they become fugitives, making national news.

They are forced to hide deep in the bush, as authorities have decided that Hector is abusing Ricky. In a chance meeting with some hunters in a hut, Ricky doesn’t help matters by describing his relationship with Hector in… an extremely funny way, not knowing that what he is saying makes Hector look like a sadistic pervert. The two manage to escape the three hunters, but the hunters have seen the newspapers, and they quickly call the authorities into the area to hunt down the pair.

Leading this chase is supposed child welfare officer Paula Hall. Her motto is ‘No Child Left Behind’, but it is clear that her motives are not pure. Appearing on a news show, she describes Ricky as a ‘bad egg’, capable of spitting, littering, and other heinous crimes. It is hilarious to see her describe these petty acts as if they were crimes against humanity, and her negative energy visibly rattles the two news presenters. It would seem that in her eyes, no child left behind means no child is left outside the system.

The character development of both Hector and Ricky is incredible, as the two transform by film’s end as they survive in the bush for months. Their relationship also forms with perfect pacing, and there are many laughs to be had until the final credits, as well as some tense moments. This is because of the extreme adventure the two embark on, relying on each other and Hector’s knowledge of the bush to survive. After an encounter with a wildebeest, Ricky decides to label the two as Wilderpeople as they are being hunted much like the beast.

Hector can’t go back because the country is accusing him of being a child molester. Ricky can’t go back because, despite her charade of being supportive to young people, he knows that Paula will send him to juvenile detention if he is caught, as no other family will take him. This is a strong message within the film: the plight of foster children; children in the ‘system’ who are routinely treated like shit by government workers. I have read that only New Zealanders could fully understand this film. I may be Australian, a close cousin you could say, but I think anyone who is human will understand this film’s message, along with its brilliant sense of humour and adventure.

If I were to find fault in this film, and it is difficult, it would be that the theme of child welfare workers was a tad heavy. But it needs to be, it is a long-running problem in New Zealand and Australia, and I can’t imagine we are alone. This film shines a bright light on the issue while retaining that sense of fun and adventure. The depiction of child welfare is exaggerated but still not far from the truth. As an aspiring youth worker, the child welfare worker character disgusted me and reminded me of more than a few alleged child welfare workers I know of. 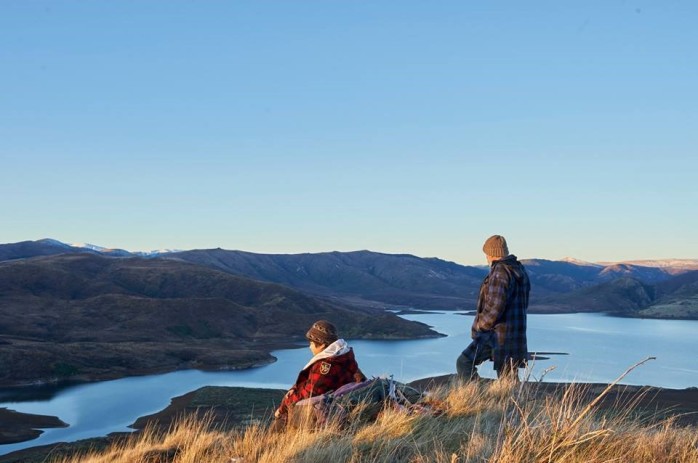 Soaking in the beauty that is New Zealand, it is hard to go wrong when filming. A welcome addition is a very unique and fitting soundtrack, which just adds to the atmosphere that the film

creates. Not one of tension or horror, but one of fun, of adventure. The film also has a huge heart. The acting is amazing, unsurprising for Aussie veteran Sam O’Niell, but young Julian Dennison steals the show, showing a knack for comic delivery and acting skills that are well beyond his years. I hope to see the youngster again, as he steals the show from O’Neill. As for Waititi, it seems superheroes are next, as he is slated to direct Thor 3. He sure as hell deserves the promotion.