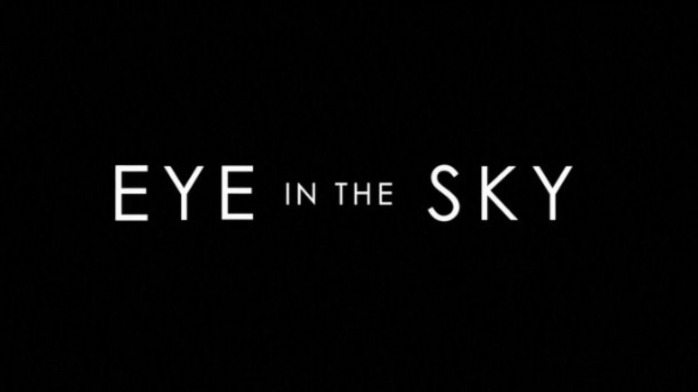 While this is a tense and gripping flick from the opening scenes, I find myself feeling conflicted. While a film about drone warfare is a topic certainly worth exploring, I took issue with how some elements were presented. But if we put aside the (in)accuracy of drone warfare presented, this is a tense film from start to finish. The opening shot shows a girl playing harmlessly, but as the camera pulls out we see an armed truck driving around the block of houses. This sets the tone of tension from the very beginning, and also represents the quagmire that is the ‘War on Terror’. The almost complete lack of a score adds to this tension – there is no music to manipulate scenes, and the film is efficient, clocking in at 103 minutes.

Aaron Paul finally lands a substantial role and delivers easily his best work since cooking amphetamines for a living, as he subtly plays a conflicted drone operator. Standing out though is Dame Helen Mirren, who dominates every scene she is in, playing a determined Colonel Katherine Powell overseeing the drone strike team. They have the exact location of wanted terrorists, with drones monitoring their progress. They are even able to get a miniature drone inside the house itself, confirming that there are terrorists in the building.

The success of the mission though depends on many, from the Attorney General to others who all have differing opinions on collateral damage, and the hard questions that arise from such a subject. Is the life of one person worth less than the theoretical loss of lives after a terrorist attack? Eye In The Sky asks us a lot of questions, and rather than preaching the answers it does the opposite, leaving us to decide the morality of what just happened.

It is essentially shot in real time, which significantly ups the stakes as the situation becomes increasingly urgent. With agents in the area, undercover, we witness the events unfold from multiple viewpoints: those risking the most by being on the ground, the video feed from airborne drones, as well as the Colonel’s team. They are all monitoring the situation while being key in whether the mission succeeds or not. Each individual reacts in different ways to the growing potential disaster, and though there is little character development, the way each person reacts to possible collateral damage from drone strikes is more than enough to demonstrate their personality, such is the delicacy of the issue of drones, an issue with excess grey areas.

Interestingly, the drone pilots are isolated from any people making decisions, which appropriately highlights the power these people can wield. Our drone pilot Steve Watts (Aaron Paul) has a conscience of sorts, but how many real pilots do? And I use the word ‘pilot’ very, very loosely. These are the people with the finger on the button, and while Watts tries to act admirably, one can’t forget the fact that drone strikes are scarily common, and in places like Yemen or Pakistan, young people have come to fear blue skies because they know that a drone is hovering over them. Now that is fucking depressing, and also seems to be the new mascot for the USA government as seen by certain countries.

Which brings me to why I feel conflicted over a tightly made thriller that is relevant to our society. Perhaps conflicted is the wrong word to use, but it feels like

the film is simultaneously based in the present and the future. Or an alternate universe where drones and drone warfare intelligence have advanced to a point where the houses that home certain high-threat terrorists are known weeks in advance, and hell-fire missiles can be deposited into whichever room of the house one desires. Overall through, Eye In The Sky is a film that grips you from the start, as the situation escalates quickly. I was leaning forward, wondering what the outcome could be. While it may have been portrayed in an overly optimistic way, it is still a relevant film that will keep your interest until the tense third act.

One beer short of a sixer

← CRUISIN’ ROUND THE BLOGOSPHERE #2
The Alliance Française French Film Festival: 2016 →