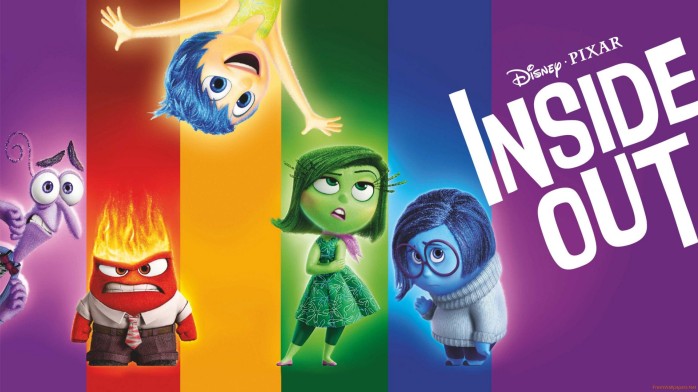 Now I know Pixar make quality films for the most part anyway, but I have never watched any since I was a kid. So watching Inside Out was something almost entirely new for me. Almost every aspect of this unique, thought-provoking film has depth; it can be interpreted in many different ways depending on the age and values of the viewer. Most importantly though is that the film brilliantly depicts the emotions young people go through and how certain situations can emotionally confuse them, potentially leading to out-of-character behaviour or worse.

The base concept is brilliant, and is one of the most creative storytelling devices I have ever seen. Living inside the heads of all humans are our emotions, of course, but this movie channels these emotions into five distinct characters.

Joy, Anger, Sadness, Disgust and Fear, these characters are Riley, living in the ‘headquarters’ inside Riley’s mind, deciding how she will act and react. They work together to ensure that Riley is a happy young girl, despite the fact that she is moving away from her hometown and her friends. It is certainly amusing to watch these characters bumble around headquarters, as their actions directly affect Riley and how she behaves. It is fascinating stuff. When events turn awry for the team, Riley’s behaviour is affected, and the way it is affected is connected to who is at the ‘controls’ inside headquarters. Again, I am simply floored by the creativity behind the entire concept.

There is some interesting subtext here throughout, as the film explores what makes us human: our personalities – our interests and hobbies, and what makes us unique. The film also depicts the inner struggles emotionally that most of us experience from time to time, especially a young person growing up in a strange and large world, and these inner struggles are amusingly represented by each characterised emotion arguing with each other, trying to get their opinion heard.

Another fascinating aspect of this story is the importance of positive memories and experiences, and how they can affect the current mood and personality of any person. The most important of these are the ‘core memories’, which are integral to who Riley is and how she sees life. Joy guards these as best she can, as she is the de facto leader, in charge of keeping Riley happy despite the setback of moving away from her home. The approach to memories is done exceptionally well; several are created each day, and Joy does her best to make sure that these memories are positive.

Most of the film takes place inside Riley’s head, and yet again the creativity on display is breathtaking. Walls and walls make up the library of memories, there is a facility that creates the dreams for Riley every night, and there is an island for each part of Riley’s personality. It is a beautifully rendered world to explore, filled with brilliant voice-acting from everybody involved; no character feels flat or dull, they are all vividly brought to life.

A very unique film, Inside Out could also be looked at as slightly educational. Seeing emotions characterised, and how they affect Riley, must surely fascinate young minds; if

I had a child I would love to hear what they took from the movie compared to myself: a 30-year old male. In fact, I’d probably trust their views over my own, as this is ultimately about the emotions a young person goes through, and the inner conflict that they have yet to completely understand and control.

One beer short of a sixer