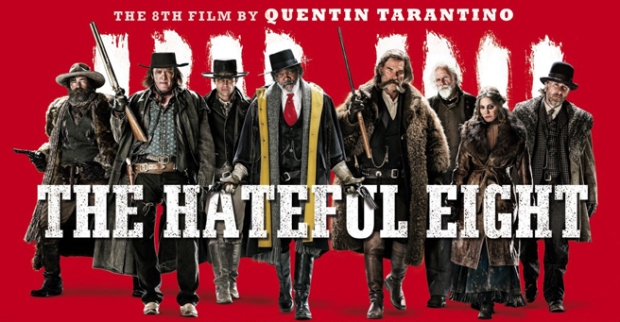 Directed and Written by Quentin Tarantino

Since he rocked the film world with Reservoir Dogs, Quentin Tarantino has consistently carved out a unique position for himself in the world of filmmaking; there isn’t really another director who can be adequately compared to him. It can certainly be argued that as he moves forward, his films are being are becoming more self-indulgent, like a film he’d like to watch rather than his audience. The Hateful Eight takes this concept to the extreme. Almost every scene lingers for too long, often for no real reason other than trying to build up tension. I didn’t feel any tension at all. This is especially apparent in the first hour, which is disappointing, especially after that masterfully epic introduction.

The script and dialogue was what I was looking forward to the most when I went to see this, and while it certainly has some zingers here and there, with some dark humour coming especially from Samuel L, it ultimately feels like an album with four or five great songs; the rest sounding like filler material. There is a lot of talking, and it is often repetitive, as if we need to constantly be reminded just exactly what is happening – which isn’t much more than a whodunit tale involving a bunch of extremely cartoonish characters. It isn’t even a particularly interesting or inventive mystery tale either. Setting it in the one area for the most part makes it hard not to compare this effort to Reservoir Dogs… And the difference is staggering. The energy and consistent wit of the dialogue is nowhere to be found, for the most part. This film does have its moments, but there are not nearly enough of them, especially for a movie this long. There is no doubt that Tarantino is a great writer, but his editing skills here are practically non-existent. I would not be surprised if his next film is four hours long.

Also, what happened to the hyper-stylised, hyper speed violence? Here, every violent encounter feels plain and executed just for the sake of shedding some blood on screen. These confrontations are often in slow motion, which considerably lowers the level of excitement (in one scene Samuel L’s voice actually slows and goes deeper, which looked and sounded horrible); there are no memorable exchanges, there are no iconic showdowns. This is partially due to the complete lack of tension; each burst of violence didn’t rock me or surprise me, it was more a case of, ‘finally!’. But further than that, the encounters simply have not been written with the same sting that his earlier work was filled with. And I’m not just comparing this to his older work – I found this disappointing regardless of what I was expecting.

Now, I don’t mind a film being separated into chapters, as this one is, but introducing two of the chapters is some terrible narration (by Quentin himself), saying “the last time we left our characters, this was happening”. It is an odd choice that sounds very out-of-place. I’m sure this was intended to play after the intermission for the 70mm version that few people will be able to watch, but it still sounds out of place. How long was the intermission, two hours. Our memories aren’t that bad!

He also makes an attempt to insert a flashback into the movie, recalling his films of old. However, it is very lazily done, unlike Pulp Fiction and the like. It is extremely simplistic, and when it comes it kills the atmosphere completely…. not that there was much to begin with, but it yanks you out of the experience and also takes its sweet time to tell it’s part of the story. It all feels very forced.

The acting however is fantastic, with Tim Roth being particularly good, but Sam Jackson steals the show, as does Jason Jennifer Leigh, who inherits her despicable character completely. A lot has been said about the cinematography here, but apart from that epic introduction and some beautiful landscape shots, I wasn’t impressed. I also found the score lacking in places where it should have been apparent. The music is amazing, but isn’t used as well as it could have been.

There has been a lot of talk about the way Daisy (Leigh) is treated throughout the movie. Personally, I feel that if the genders are equal, then what is the difference between a women being hit or a man?

Flip the coin though, and it does feel a little like a women being beaten is simply the butt of a joke. Quentin’s characters sure think so, but does he? I can’t say that I found it funny, but I wasn’t disturbed either. Confronting, yes, but this is Tarantino. And it is only a movie, not a snuff film. Who knows why he decided to have the only female in his movie act as a punching bag. I have always liked Tarantino, and always will, but this effort feels messy, over-long, and worst of all, a bit boring. Personally, I think Mr. Tarantino think he needs to check his ego and learn to write efficiently. But what do I know, eh?