I loved Birdman when I first saw it, but the more times I watched it, the more it irritated me; unlike most greats, those films I can watch over and over again. The camera-work was undeniably amazing, and I still love that soundtrack… probably because I am a drummer. But the rest of the movie feels soulless, and more than a little full of itself, despite being well-acted and well-made front to back. It was however an unconventional film to win the Oscar and that was enough to interest me in Iñárritu‘s next movie. It seems I wasn’t the only one, as while Birdman only played at a single art-house cinema early last year, The Revenant is playing everywhere in my city. Oscars open doors, there is no doubt about that. 135 million dollar doors to be precise.

At first this massive budget seems worth it, as from the very start it looks amazing, from the swooping camera-work to the long, snow-crusted beards most of the characters wear. When it was over though, I found that it was over-long and relentlessly pessimistic. The film is three hours long but the story is simply about revenge and survival. There are two subplots floating around that could have been edited out altogether, as they don’t add anything. For example, Glass (DiCaprio) has a son with him before the bear attack occurs, and he sees his dead wife in a few hallucinations. I suppose this was added to lend some dramatic heft to the simplistic plot, as his son is half Native-American. Exploring why his son is half Native-American could have created some much needed emotion to the film. But we don’t find out anything about his wife or his son, so while the movie tries to milk some emotional drama in this vein, it fails, leaving the film emotionally bleak. The carnage we witness seems for the most part pointless then, no matter how realistic it all looks. There is another subplot about a Native American tribe who are looking for a stolen daughter that feels disconnected from the rest of the story.

The passage of time within the movie is also a problem. Leo starts off with a leg twisted around the wrong way, barely alive. Yet a couple of hours later, he is running and dodging as if he were Superman. This really ripped me out of the experience.

Contrary to my problems with the story, the score is appropriately atmospheric (especially the moments where the score stops and all you can hear is nature or silence), while the camera-work is beautiful to watch, with the few action set-pieces being especially well done. It isn’t edited to look like one long take again, though there are many long, uninterrupted shots. There are also many jaw-dropping landscapes that need to be seen on the big screen. Going into the final hour, the extreme facial close-ups do get a bit repetitive. But there is no denying its overall beauty; I’m sure Emmanuel Lubezki will grab another Oscar for his work. The decision to use only natural light was a good one too, as this paints the forests and landscapes with a gritty and dark tone.

There is also no denying the incredible acting from everyone involved. I am not a big fan of Domhnall Gleeson but he is solid here as Captain of the fur trapping company Hugh Glass is a part of. Tom Hardy, playing the villain Fitzgerald, has a very heavy accent, but the way he uses this accent to deliver his lines adds to the personality of his character, creating a man that is easy to dislike. Is there anything that Tom Hardy can’t do extremely well?!

DiCaprio on the other hand barely says a word, yet says so much with his face. Arguably though, Hardy’s performance was better, as Leo most certainly overacts on more than a few occasions (see below). 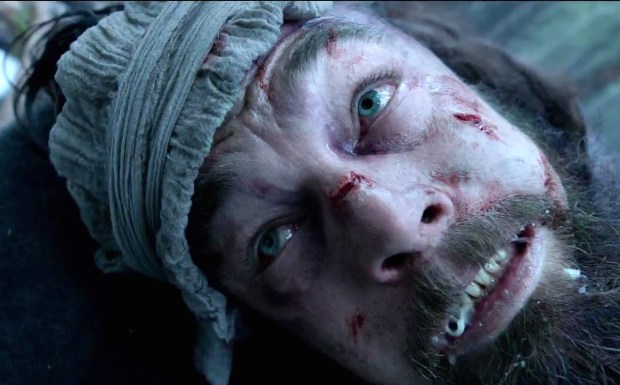 I am sure The Internet will explode if Leo doesn’t get an Oscar. And despite not liking this film as much as some others, I’m inclined to agree. Not because the role was so demanding that he had to eat raw bison liver in sub-zero temperature conditions. He deserves it because rarely does a big budget film have so much silence, and these moments allow Leo to act without words, at times pulling himself along the ground without the use of his legs. One could say he was just grunting while wearing a desperate look on his face; a much more boring version of the classic scene from The Wolf on Wall Street where he can’t walk after getting messed up on quaaludes. I suppose I’m on the fence about that one, as like I said, he does overact at times.

The Revenant deserves to be seen on the big screen, as its visual brilliance is without question, and the score to match it sounds sublime. But take your patience with you; for a film of over three hours, it doesn’t have much meat on its bones. It is too simple – which is a rare criticism for me. It is an incredible tale of survival and a willingness to cling onto life, no doubt about it. But there isn’t much more than that.

The expensive and tough shooting conditions certainly add a layer of realism that I have never seen before, but unfortunately there isn’t much of a story to go with it. This is a love/hate affair for me, no doubt about it; it is technically perfect, but emotionally flat.

Two beers short of a sixer.