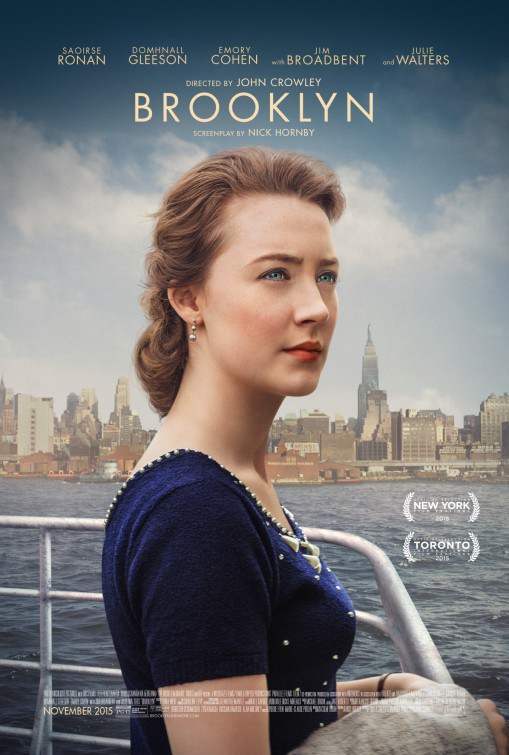 A small film festival is playing around Australia for the first time: The BBC British Film Festival. Most of the films are romantic comedies, which ruled most of the films out for me, buuuut I wanted to broaden my horizons a bit…

Brooklyn is a romantic film that offers something different. It ignores the standard cliches and the stale humour that puts me off most romantic comedies, and make no mistake, this is a romantic comedy. However it is also a touching coming-of-age story, another sub-genre that I’ve never been a big fan of. This film however manages to merge the two into a film that both my younger sister and I could enjoy. And let me say, that is a rare thing!

The film begins with Eilis (Saoirse Ronan) living a simple life in her hometown in Ireland. However, she doesn’t see much of a future in her hometown, and she makes the difficult decision to travel to the US by herself. The boat trip offers some interesting scenes as a fellow immigrant teaches Eilis how to act around the strict US customs of the time – the movie is based in the 1950’s. This makes for some amusing scenes, and they certainly are not the last. This movie is funny!

While having no family in Brooklyn, Eilis has organised a place to live and work. The boarding house that she stays at also houses four other girls of similar age, along with the housekeeper, Mrs Kehoe ( Julie Walters), a devoutly religious person. She is also stern and assertive, leading to many hilarious discussions around the dinner table. This is where most of the humour comes from and its effectiveness is thanks to the sharp dialogue and the pitch perfect acting. This is an extremely well written and produced film, from start to finish. The cinematography is subtle but effective; nothing flashy, just top notch work that helps immerse the viewer into the experience.

Upon first arriving in Brooklyn, she struggles at the shop she has secured work with. Her shy demeanour is remarked on by her boss, who tells her that each customer should be treated like a new friend.

Furthermore, around the dinner table at the boarding house she is quiet, especially compared to her gossipy roommates. The character arc for Eilis was done to perfection, as she starts the movie as a shy, soft-spoken person but by the end of the film she is a confident and assertive woman who knows what she wants.

Of course, soon into her stay in Brooklyn she meets a man. The romantic elements are handled well and there are no overly sentimental moments, which is probably why I enjoyed this film as much as I did. When she is able to afford it, she travels home to see her family and friends. There is an element of tension here, as the film does not give any clues as to where she will go next, as when she returns home she begins to realise things that she took for granted before moving away. We have no idea what the final conclusion will be, unlike almost every romantic comedy I have seen.

Brooklyn is of course more than a romantic comedy; the film touches on the toughness of immigration, as we see Eilis struggle to adjust to her new unfamiliar surroundings, having no friends or family in her new home city. We also see how homesickness can affect a person, both their original home and their new one. It is a simple narrative, but this

simplicity is what makes it such a true to life film. Considering I don’t normally go for these movies, yet loved this, I can’t recommend this enough. It is a fantastic performance from Ronan and the rest of the cast rounds it off very nicely.

One beer short of a six-pack!