If I were to choose a favourite film of the Adelaide Film Festival, it would have to be The Lobster, which worked for me on multiple levels. But, a close second is definitely this visual masterpiece, a film that needs to be seen to be believed and sent many at Cannes Film Festival into a frenzy. If I was there, I would have been one of them

The Assassin is a unique movie; it takes the sweeping martial arts story and combines it with the visual majesty of art-house cinema. This creates a meditative story that surely disappointed a majority of the crowd who had gathered for the screening. In fact, this movie was so popular the line for it stretched outside the lobby! I was surprised at such interest in a foreign film, though something tells me that many of these people were looking forward to a Taiwanese version of The Raid or Ong Bak. In fact, while waiting I heard a lot of people expecting blood and decapitations. Needless to say, these patrons’ expectations were not met.

The story is very simple; based in the 9th century, in the Tang dynasty, we meet an abducted young woman, trained to be an assassin and tasked with killing a close friend. Certainly no points for originality there, but this film is not about story. It is all about the extremely long takes and detailed cinematography that present a tasty treat for the eyes.

At Cannes, this film was said to “send critics in search of new superlatives” as it took the Best Director prize. With the help of Mark Lee Ping-Bing as DOP, it isn’t hard to see why this film was chosen. I feel like I have seen an entirely new form of cinema; Jauja or Under The Skin could be apt modern comparisons, but apart from long takes, these two films share nothing in common with The Assassin, in which every shot is prepared with painstaking detail. This film truly plays out like a painting that has been printed onto a spool of film.

Each and every part of the set is treated as a character, so the story takes a back-seat. The cinematography begins with black and white sequences, which are shot as silhouettes and the darkness of trees contrast against the brightness of the sky. The camera techniques could perhaps be compared to Kubrick in their purpose and technical prowess; there isn’t a scene that doesn’t look like something that could be framed and mounted. 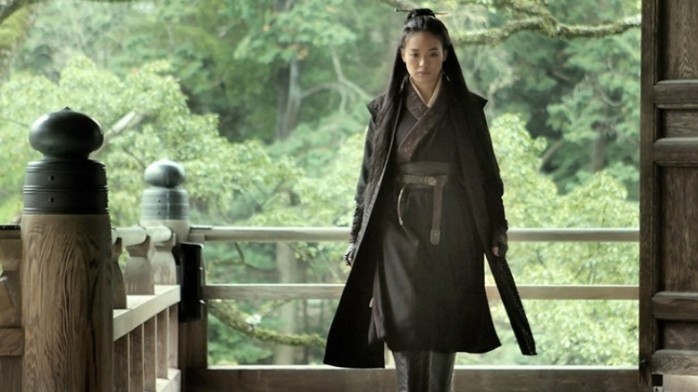 I won’t pretend to know much about the subject of the Tang dynasty as I am no scholar, but what I can report is that the make-up and costumes are incredibly realised and realistic. If I hadn’t known better I’d have thought I was watching something straight from the 9th century; the camerawork and set design is that astounding. Now, much like those at Cannes, I find myself struggling to find the appropriate adjective to describe just how amazing this film looks!

While I was watching I’ll freely admit that I had no idea what was happening within the story. The beauty of the film almost renders plot and characters meaningless, as it presents image after image for us to simply gaze at in astonishment.

Another interesting note regarding this film is the restraint on the actors’ behalf. Being a trained killer, the assassin’s face shows no trace of emotion, nor does her target. When she does strike the fight scenes flow seamlessly, and there are a few important reasons for why this is.

Firstly, the crew reportedly filmed these scenes over and over, to the point where they were battered and bruised, moving using muscle memory, which gives us the smoothness of the combat. Second, a direct effort was made to use only Chinese martial arts, a move that further separates this film from its peers. And thirdly and perhaps most importantly, these scenes are well shot.

Too often when watching a Hollywood film, once two characters get into some fisticuffs the camera starts flailing around the place, with at least one different take per second. This has always confused me as it makes it very hard to follow a fight, who is winning, or even who is who. Here, there is no unstable camerawork to be found, as the combat is captured with the same tenacity and skill as the rest of this striking film.

The Assassin is certainly not a film for everyone. The story isn’t so important and neither is anything like character arcs or development. This is a film to calmly absorb while waiting for the assassin to appear; a moving painting to admire for a couple of hours. Those expecting The Raid 3 will be very, very disappointed. Those who like art-house films, with an eye for good photography, will be praising this film for some time.