The Adelaide Film Festival is coming to an end, but not before a few bangs! I have had a ton of fun and there are still many films to come. This one was a part of the new ‘Scream’ section of films, focusing on fun slasher flicks. Deathgasm certainly fits the description. The AFF is still running till Sunday, check out their program and buy tickets here! 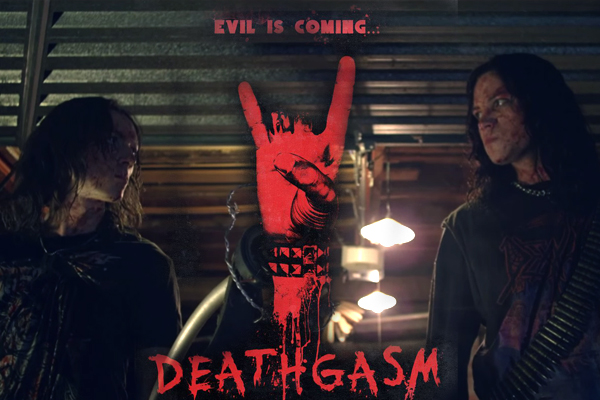 Finally, we have a film that takes the cheesiness of heavy metal (not that die-hard fans would call it cheesy) and mashes it with a bloody slasher flick. Did we know we needed it? No we did not. But here it is in all its brutal glory, and I feel the world of cinema is now a better place for it.

What is this incessant rambling? The film in question is the New Zealand horror comedy Deathgasm – a name that might sound odd to those not into metal, but believe me, there are bands with far worse names than that. Our neighbours to the east seem to have a knack for this sort of thing; last year New Zealand gave us What We Do In The Shadows and Housebound. This year though we have something a little different.

Deathgasm’s comedy is dark and very tongue in cheek, reminiscent of Dead Snow 2: Red vs Dead – a Swedish blood filled fun-fest – though this is not quite as funny (and as plain wrong). This flick, like its Swedish cousin, knows it is silly and it revels in that fact. It doesn’t try to use gore to be scary, rather it is something to laugh at.

Our story is simple: a loner, teenage metalhead named Brodie meets a fellow longhair named Zakk at a record store, and they come across the same record and meet. This is surprisingly on point, which I’ll get to later.

It turns out that Zakk plays bass, and he soon announces that they are forming a band, despite questionable musical skills from Brodie and his two friends. Soon they manage to (conveniently) find a piece of music. Looking at it in the light, they see that it is a song, written in music on old, tattered paper. The title is in Latin and sounds ominous. Of course Zakk, Brodie and his two friends (table-top RPG fans, of course) play the song, and suddenly the electricity goes bananas, turning the amplifiers to eleven – naturally – and subsequently the entire neighbourhood hears the song and begin to bleed from every orifice, as people tend to do when they hear extreme metal. The song they play is actually pretty great, it sounds like a somehow darker, more Satanic version of the classic song Black Sabbath.

Are they Zombies? No, these people were alive and well until they heard the Black Hymn. They are Demons. Still, they eat people, so we are talking semantics as far as I am concerned.

The makers of this film must have spent half their budget on special effects, as some of the kills are brutal and leave the victims in a state that David Cronenberg would be proud of. I’m not usually a fan of slasher flicks but there were some pretty gruesome moments once the five go on their rampage. I was impressed with the realism but was also quite shocked at some of the more bloody moments. This film almost has too much blood! One could say it is obsessed with blood, and that person wouldn’t be inaccurate.

On a surprisingly serious note, this film offers a unique study of the culture that surround heavy metal if you choose to see it. Metal is unlike any other genre of music in terms of the following it has and the dedication many fans possess. This theme is subtle but it is there, intentional or otherwise, such as when Brodie and Zakk first meet.

I used to be that guy: the long hair and the black metal band t-shirts, and it is amazing how many extremely nice people you meet who also have long hair, also donning a black band t-shirt. Metal is something that you could talk for hours about. The amount of people I have met who have recommended me things is phenomenal. There is no doubt in my mind that there is a true culture surrounding heavy metal, and because it will always be on the fringe of society – for the most part at least – it will always be a link that two strangers can share and instantly have a three hour conversation about it over a few beers.

Culture lesson over, there is no doubt that this will strike more of a chord (see what I did there?) with metal-heads, though anyone faintly aware of the existence of heavy metal will be able to enjoy this non-stop gore-fest. It’s obvious the filmmakers had a blast making this, so watch it now and have a blast yourself!

Out on VOD now!