Dennis Villeneuve seems to really be hitting his stride. While it wasn’t perfect, I loved the tension of Prisoners, and I loved the weirdness of his most recent output, Enemy, both starring Jake Gyllenhaal. With Sicario, the level of tension is cranked to 11, building on the tense atmosphere that defined Prisoners while adding some action and political commentary to spice things up. While the story is simple enough, as it unfolds the film is subtly commenting on the US-led War on Drugs, and not only its ineffectiveness, but what it can (and has) done to other countries caught in the crossfire. This is made especially clear in the final scenes. Sicario also must be commended for shining a light so intensely on what is in reality an ugly situation. None of us really know the true influence of their neighbours to the north over their country, but there is no doubt that Mexico is a violent place. In my humble opinion, leading a ‘war’ on drugs simply leads to more criminal activity – and this is certainly evident in the way Mexican Drug Cartels operate. Despite all this, this is not primarily a political film – it doesn’t have an agenda. No sides are being taken here.

This lack of bias affects the action in a positive way, as Sicario does not shy away from the often gruesome nature of what goes on in these situations, and doesn’t attempt to place any political blame on anyone. The action simply continues to move.

The plot is simple but effective. Kate Macer (Emily Blunt) is a dedicated and loyal police officer. But at the start of the film her team stumble into a house whose walls are literally filled with rotting corpses; murders that are related to the actions of the Mexican cartel. If this film has a weak spot it is Blunt’s character – she doesn’t really progress from the green, idealistic officer that she is at the start of the film. Following the discovery of this house, she is offered a change of job – a chance to really make a difference. She is hesitant but is always motivated by what she thinks is right and accepts the new assignment. 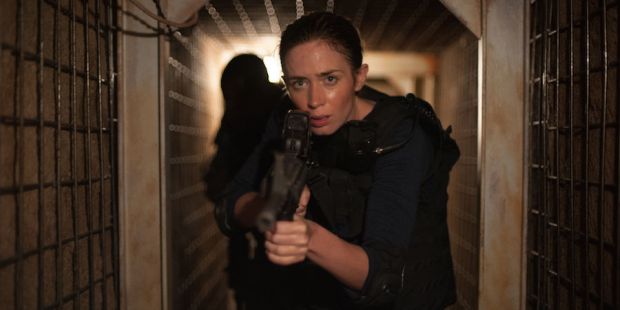 Blunt’s Kate Macer is the moral compass of a movie that is filled with immoral behaviour, and despite the lack of development for her character, she does an excellent job.

The new unit Kate begins to work for don’t treat her seriously because of these idealistic attitudes and her ‘rookie’ status. The unit features a hilarious Josh Brolin as Matt, a mysterious man whose employer is never made clear, and also a man who often makes inappropriate comments given the context, causing me to laugh in a very similar way to the way violent Coen films make me giggle. But if we are talking about mysterious characters, we can’t ignore a supremely intense turn by Benicio Del Toro – off the top of my head I can only think of Fear and Loathing as a film where he played such an intense role and was so immersed in his character.

He is known simply as Alejandro, and if the motives of Matt are shrouded in clouds, those of Alejandro are buried. It is this mystery that makes much of the movie a guessing game, as we try to pinpoint each characters’ true intentions. All we know is that their operation has something to do with the southern US border and the Mexican Drug Cartels that seem to operate on both sides.

After Prisoners, which suffered from a slightly overlong screenplay, Villeneuve has tightened the screws and has created a well-paced film, in fact the pacing feels perfect. When watching this film you get a sense that those behind the scenes really know what they are doing. The cinematography is also something worth mentioning: thanks to DOP Richard Deakins, we are treated to many beautiful aerial shots of Mexico, as well as shots of the massive slums of the city, as if to hammer home the point of how many people this violence affects. I lost count of the different camera techniques that were used, with a lot of odd framing used, while there are other sections where the camera zooms in past the point of pixelation. Each scene, each shot feels purposeful. It may be a 2-hour movie but it flies by and it doesn’t feel like a single shot was wasted. 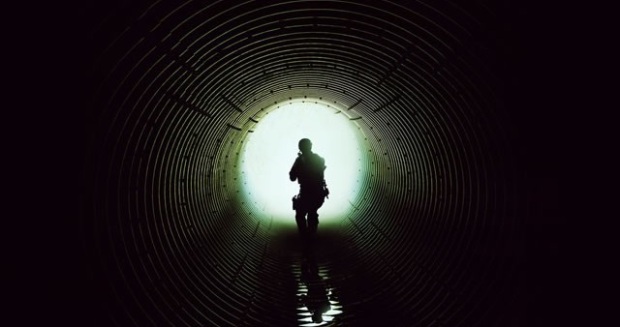 At one point we see what the agents are seeing: night-vision and thermal imaging devices dominate a couple of scenes and create an incredibly immersive experience that again ramps up that tension. The sound-editing/soundtrack here is also something that needs to be mentioned, as the work done here is some of the best I have ever heard accompanying a film, period.

Deafening silence dominates tense conversations where often barely a word is uttered as we wait on each word; while at other times the soundtrack booms and sounds truly dread-inducing, thanks to the work of Jóhann Jóhannsson, who also worked on Prisoners.

The sound of gunfire sounded incredible also – there are a few violent set-pieces and they are executed as well as I have ever seen for a film of this nature. This movie isn’t messing around.

Sicario is definitely one of the best so far this year. Only half a beer short of a six pack. Go see it now!!

Have you seen this one yet? What did you think?

← THE GIFT [2015]
TWO OF MY ALL-TIME FAVORITE CARTOONS BLOGATHON! – ALICE IN WONDERLAND/RICK & MORTY →