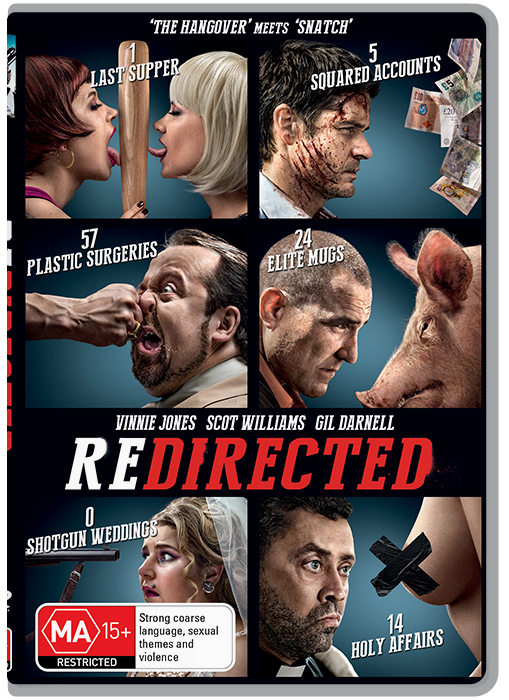 Redirected is a darkly funny film that takes the Guy Ritchie style of British gangster flicks and infuses it with comedic mayhem. Most of the humour here is morally wrong; it is a bit like Dead Snow 2: Red Dead, which I loved. It was also interesting to find out that the movie grossed more in Lithuania than Avatar, which held the previous record. Unfortunately the country doesn’t have a huge production of art, so it is nice to see this film putting it on the map. It is well made too, and is well cast despite it consisting of what mainly seems like unknown up-and-coming British actors, and many locals who may or may not have had previous movie experience. Either way, the movie looks slick.

So to lead this this all-star cast we have Vinnie Jones, who has been in so many movies, many of them terrible, that he honestly must accept every role no matter what it is… Not that I’d say that to his face. Say what you will about him though, he can play the evil villain extremely well, and can have frightening presence on screen. Most movies he appears in aren’t great these days, but this one is just a bit different, while being eccentric and memorable. It is definitely one of his better efforts recently.

The story is as convoluted as it is funny, and in itself is one big joke. A group of friends want to pull off a big heist, but they are one short. Their best idea? Rope in a friend who wants nothing to do with their criminal plans! Simple. Nothing can go wrong.

But you just know that robbing Vinnie Jones isn’t a good idea, and that is precisely what the group do at the start of the movie – while their unwilling friend Michael waits in the car as an unaware getaway driver. Poor, naive Michael. Their plan: rob them, fly to Malaysia and soak up some sun with their cash. Simple. There is a small snag in the plan though, as two of the friends have to psychically knock out Michael just to get him to come on the plane, dumping him on a wheelchair to avoid suspicion.

This becomes more of a problem for Michael when the flight is (rather conveniently) redirected to Lithuania as a result of the Icelandic volcanic explosions. Michael of course is thoroughly unaware of this though, which leads to Michael waking from his slumber, running outside of his hotel thinking he is in Malaysia. When he tries to ask where exactly he is, angry locals yell and swear at him in their language while he is screaming at them that he can’t speak Malaysian. It is a great scene, and the plot just gets more bizarre from here.

Vinnie doesn’t take this robbery lightly and he promptly tracks the group to Lithuania, where suddenly the Lithuanian police and mob become not only thorns in Vinnie’s plan, but they also take extreme interest in the money that he is hunting down. This begins an amusing set of events involving everyone, and most of it revolves around their own greed, with a touch of sentimentality.

Other than the humour, the best asset of the film is the writing of each character for the group. It is no ‘Wolfpack’ – they aren’t as funny or as well written, but I can see where the HANGOVER meets Guy Ritchie tag comes from. Much like the ‘Wolfpack’, these four friends are thrust into absurd situations (here with an almost hyperactive mentality) and all four of them couldn’t be more different. We have the meek one who is always caving under peer pressure, the charismatic (at times) leader, the lazy sod who is just in it for the ride, and of course their unwilling friend Michael who they have brought along against his will.

I fear some jokes got lost in translation, but the joke of misunderstanding due to language barriers is used very well here, with some great lines and memorable scenes, while somehow along the way, through mistranslation, the Lithuanian mob end up thinking all the English tourists are gays. This is a funny film that revels in its own insanity and doesn’t take itself seriously for a second, even poking humour at its own people. One thing is very clear: humour in eastern-Europe seems different than Western humour, and I think that might be understating it.

Really though, this is very much one of those films where your sense of humour will dictate whether you’ll enjoy it like I did. This isn’t as funny Dead Snow, but it is similar in nature and funny in dark and extremely bizarre ways. It is also a fun, action-filled British gangster flick with an eastern-European twist, as well as the bad-arse sounding accents that come with the territory. Well worth a watch if you like Guy Ritchie flicks and have a messed up sense of humour like myself.

If you’re a half-glass-empty person, you’ll see this as a second rate Guy Ritchie movie and nothing more. It is a fair assessment. If you are a little more optimistic, you may just find yourself laughing yourself silly.