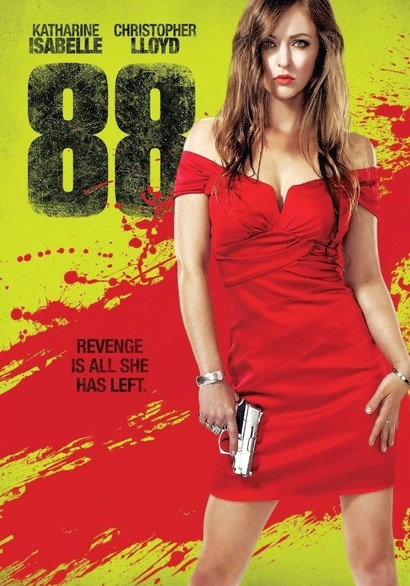 Two things struck me when I watched this film. The first was inspired by a very poignant post on Ruth’s Flixchatter, which pointed out the large gap between memorable quotes from female characters and male ones. I also recently read a fantastic, similar post on Screenkicker, which praised Edge of Tomorrow (a film I didn’t bother with but now feel like I must) for including a proper female lead. A Sarah Connor, not a damsel in distress, not a stereotypical martial arts expert. Not a simple love interest. The protagonist here is also  female, named Gwen, and her character is refreshingly written; doe-eyed but dangerous, whether she is waving a pistol around with purpose or staring blankly with nothing in her eyes. The range of emotions she goes through is incredible, all nailed by Katherine Isabelle. I hope to see her again as she plays a multi-faceted lead character very well. The movie was also directed and co-written by a female, which makes sense. More women need a chance in the film industry.

You all remember when Walter White stumbled through the shops naked, diagnosed as lapsing into an apparent fugue state right? Well, while he was bullshitting at the time, this movie takes that state of mind and puts our heroine directly into the crossfire. We get a title card at the beginning explaining what a fugue state is, and that it not only includes severe memory loss but also visual and auditory (hearing voices) hallucinations. This immediately had me feeling for Gwen, as a defective memory and mild hallucinations make up half of my existence. So perhaps I am a little biased here, who knows?

The other thing that struck me however was the more obvious notion that this feels like a re-run of Memento. However, having a highly defective memory myself due to epilepsy, any movie that involves memories will interest me, and this one sucked me in. While Memento was a film that had a very consistent pace and style, here flashbacks come and go as the narrative gets twisted on itself, perhaps once too often, forcing the viewer to piece everything together while watching two time lines. The pacing is also very different; again, Memento is slower, more deliberate. 88 couldn’t be more different, with the pacing of the film feeling uneven but fun – enough to keep you watching. The flashbacks are also visually appealing and aren’t so convoluted that the movie makes no sense. That being said, I’d love to watch this again.

One aspect I really appreciated was how she regained memories that she had forgotten, or more to the point, how she reacted to these flashbacks. Upon seeing reminders, they cue a memory in her brain to suddenly resurface, causing confusion and outbursts of emotion as she tries to piece together who she knows, who she can trust, who she is. I’m obviously not in a state as bad as Gwen’s, but I can vouch that this is a hard feeling to deal with. It is unsettling to know that you could have done something awful and not even remember it until a person or any sort of reminder suddenly brings the memory rushing back. It is painful.

That is the game played here; as Gwen regains more memories we see them too, so as the viewer we are essentially in the shoes of Gwen, trying to piece together what has happened. Now yes, this could be seen as a half-rate Memento. And you are entitled to that opinion. But apart from the memory loss and the fact both protagonists having loosely similar motives, both films are executed in completely different ways. Not to mention 88 has a kick-arse heroine who isn’t absurdly overpowered, or helpless. She is a woman of action and film needs more characters like her.

I won’t lie, this doesn’t live up to Memento, but it comes damn close. Ignore the IMDb ratings (which I’m sure many of you do), this film is worth more than 50%.

Available online and on DVD now.