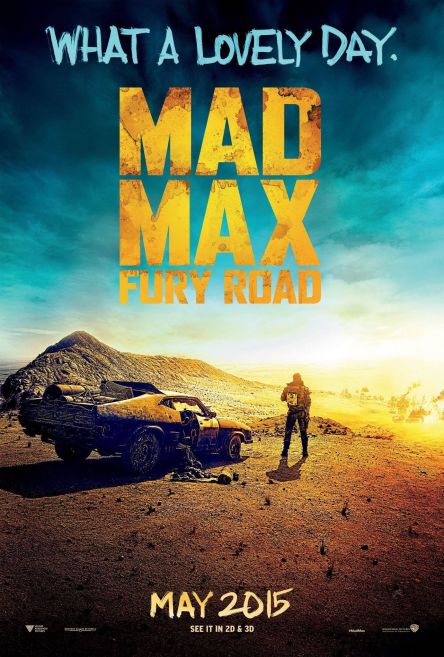 I was left speechless when this finished. It can be hard to describe, as it truly grabs you by the balls within the first five minutes, it twists ’em, and it doesn’t let go til the very end. But hey, I’ll try to say something more appropriate.

Max Max: Fury Road is two hours of sheer madness that isn’t sullied by bad acting or laughable lines. A blockbuster that is gritty and doesn’t have a sense of humour that could be equated to a fluffy kitten. No ‘lets all hug’ sentimental bullshit. This is honestly a movie I thought I’d never see: a CGI-filled blockbuster that I flat out loved. The stunts are so much fun, the FX so great, it is the first movie I have seen where I have thoroughly enjoyed all this type of stuff – probably because the cinematography for once doesn’t suffer cos of it. It is all incredibly shot. But also because of the dark tone that hangs over the whole thing.

And it is more than just the action too, the film says so much without actually saying it. Politics, child labour, religious devotion, equal gender rights, insanity, there is so much to take from this movie after experiencing the insanely fun and bloody action. There is a lot here under the grimey layer of sheer awesomeness, but in a way that it is just kinda there, take it or leave it. The story is pretty decent for a blockbuster film too, much better than all these YA adaptions especially, which helps.

But really, fuck all that, this is all about the action, which is insanely brutal and appropriately high-octane. I thought to myself more than once, ‘I think I am loving this more than Terminator 2’ but other than that, there wasn’t time to think. It kicked off fast and barely stopped, and the lulls were amplified by the insanity preceding them. This is also a dark, gritty film, which made it even better. Did I say that already?

I don’t think I have ever heard an American actor do an Aussie accent close to well, was Hardy actually trying for that? Either way, he didn’t talk much so it didn’t really matter. This is more Theron’s movie than Hardy’s, he doesn’t say much and does next to nothing for the first third or so. Theron’s character is more of the hero of the story, if there were to be one in such a dark and grisly world. Her and Hardy are great on screen together. Nick Hoult is fuckin’ great too. I don’t even like this type of movie but goddamn, the execution is everything. This film lived up to the hype, and then some. I’m gonna go see this again, soon.

Not much more can be said.