This film made for a very interesting modern double to follow the classic french war film Le Grande Illusion, which I saw mere hours before watching this. Much like the older film, we do not see the front line here. The key difference though is the tension caused by the rapid retreat of the German frontline due to the Normandy landings and Allied progress since then. The story takes place in the heart of Paris, where we are introduced to General von Cholitz. He is the man tasked with, for no real strategic purpose, to level the city of France, destroying not only the priceless, ages old monuments that make the city so beautiful, but also millions of innocent civilians having not fought against the German army at all. General Cholitz is extremely critical of the French people who he comments at one point ‘opened her legs to us, like a whore.’ Much has been written about WWII and in particular the French surrender, and whether Cholitz said those words in real life is obviously debatable. But nevertheless, it conveys the message perfectly as we hear what Cholitz thinks of the French people as a whole, regardless if they are a part of the resistance or not. What bothered me here was Cholitz’ constant use of the term terrorist. Was that word even in use during WWII? Perhaps it was, but I doubt it would have been used to this extent back in the 1940’s. This is one of few problems I have with this film though.

After finalising the plans for the demolition, he receives an unexpected visitor, Swedish consul Raoul Nordling. When he announces the reason for his visit, the reasons are trivial at best. He was to deliver a letter from a French general, but Scholitz shows no interest as Nordling had expected. Slowly his reasons for the visit unfold, and the dialogue between Nordling and Cholitz take centre stage and make up most of the movie. Which makes sense, it is based on a play. Apart from the hotel-room-turned-General’s-office where this vital conversation is held, we see events unfolding outside the hotel three or four times maximum, not including the few scenes that take place in a bunker, where the charges for the demolition all lead to. As the allies advance, communication is cut off from this unit and Cholitz, and the german soldiers know that they must hear the order from the General before detonation.

Knowing of the Allied advance, Nordling almost mocks Cholitz as he is about to be shown the door, and the knowledge he possesses makes Cholitz suspicious of ties to the Resistance. Nordling seems to have intended for this to be the case, as he is now detained by the general and the consul can start working on the psyche of the one man who is responsible for whether the historic monuments of Paris are to remain standing or to be blown into pieces. This is of course his real agenda, which Cholitz quickly catches onto. Considering that we know the basic ending – Paris still stands – the urgent and supremely written dialogue, along with two near-perfect lead performances, create a tense feeling for the majority of the movie. We may know the end result, but we do not know how we got there. After doing some reading, this play (which was adapted for the screen by the same man who wrote the play) follows history rather closely and doesn’t majorly distort events. The only real difference is that in the film, the time between Nordling’s arrival to convince Cholitz, with the allies advancing in the background, is condensed and is depicted as having happened over a day or two, rather than a week or two. However this is necessary given that this is a movie, based on a play no less. Hardly a flaw in my eyes.

Both lead actors are on point, with sharp dialogue and engaging facial expressions making for compelling viewing, as we hear the sounds of war faintly in the distance. Their discussion see-saws consistently, with the German general stubborn, but not without reason. Among the many subjects that the two converse about, what is notable is the commentary on Nazi Germany post-D-Day. Cholitz talks fondly of memories where Paris was a German officers’ dream post, given the amount of land they conquered early in the war. The fact alone that the order has been given to blow a city like Paris into pieces shows just how insane and lost Adolf hitler was in his later years, and furthermore just how desperate the Germans were after the landings at Normandy and after, as both the Red Army and American troops closed in on occupied Europe. Much like Le Grande Illusion then, this is a fascinating movie about war where barely any shots are fired, one that says a lot about the state of the Third Reich in its final days, the attitude that permeated this army. It is also a fantastic statement on soldiers blindly following orders, which seems particularly relevant in today’s political climate. 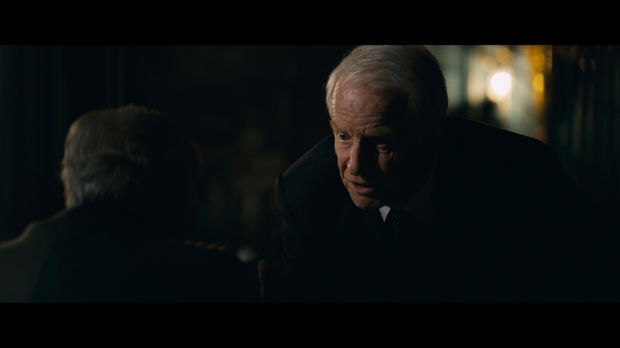 IN A NUTSHELL THEN?

The malicious, war-like intent is here within General Cholitz, and this is what makes the picture as his conversation with Nordling becomes more personal and increasingly real for the German general. The way this general is forced into making difficult calls, and the language and tenacity that the German general uses in his exchanges with Nordling is often intimidating and war-like. One could almost say that their conversation is a dialogue-set metaphor for the frontlines, or for war itself, as the battle of wits between the two gentleman ebbs and flows, with both gaining an advantage at some point, leading to a thoroughly memorable last act that will surprise you. One last aspect of the movie I thoroughly enjoyed was the transition from French to German by Niels Arestrup, seamlessly moving from conversation in French to barking orders to his men in German. A small point yes, but one that I enjoyed, along with the entire film as a whole. Essential viewing for anyone interested in WWII history, or anyone who enjoys intense, dialogue-driven dramas.