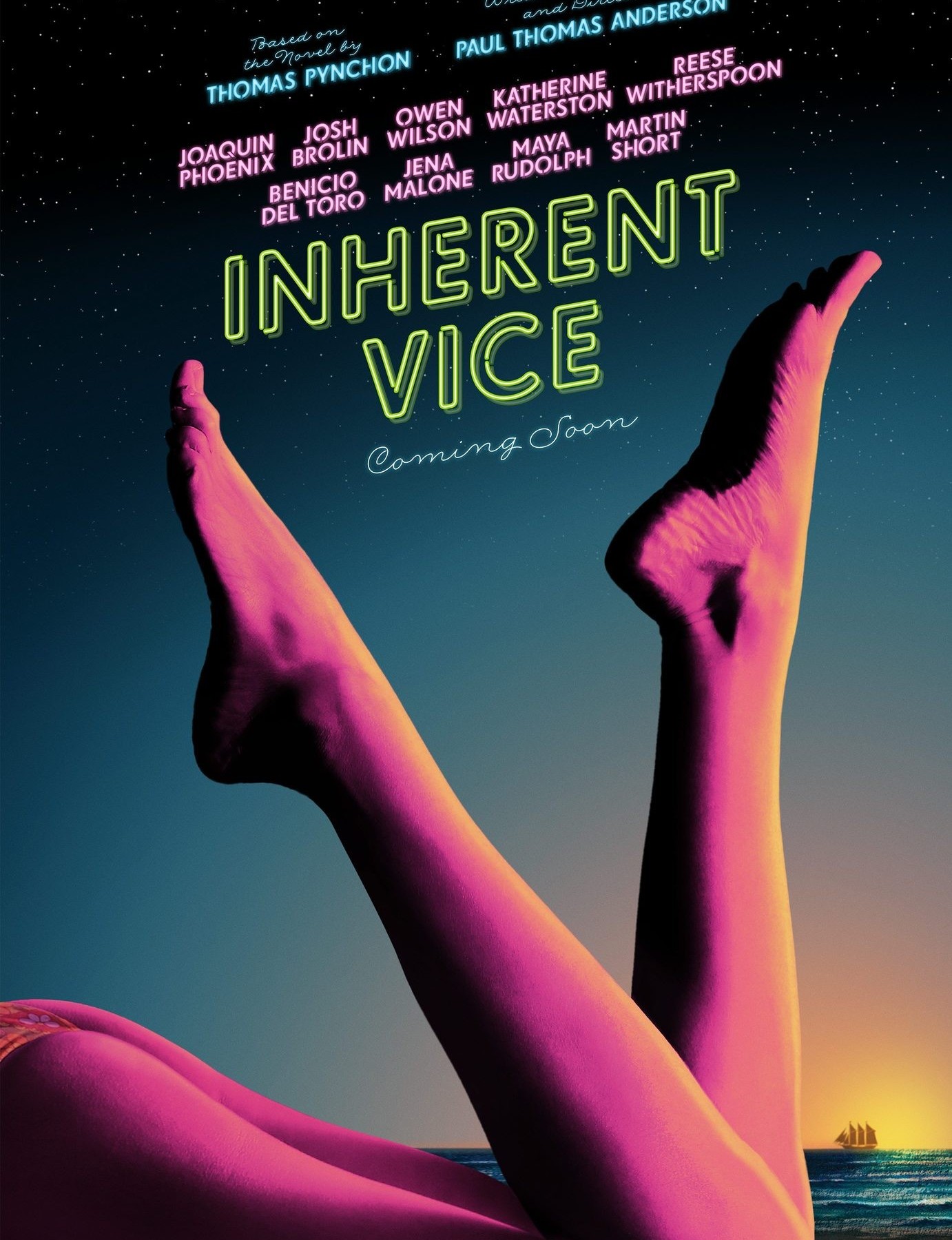 While adapted from a novel by Thomas Pynchon, the general theme of this movie reminds me of that elusive idea that Hunter S. Thompson chased for over a decade: The “Death of the American Dream” that coincided with the end of 60’s counter-culture, the beginning of Vietnam, and the presidency of Nixon, who can be seen at least once on television. Doc didn’t get this memo, or if he did, he is denying that reality with all his will. He doesn’t want the dream to be over. He is fighting hard but losing; it would seem that the Death is catching up with him. Peace and Love are out the window and hippie-hating cops now run the show. The amusing thing is that if Doc faced the reality that this dream is over, he probably wouldn’t have been a part of the wild ride that makes this movie. And make no mistake, this film is a ride, and both Doc and the viewer are very much passengers.

Shasta Fey kicks the absurdly and intentionally convoluted plot off in the first scene, as she surprises our hippie-hero by casually dropping in, the first time the two have seen each other in at least 12 months. Almost instantly, we can surmise that this is adapted from a book, and it is one of the finest adaptations I have ever seen. The use of narration can be difficult yet Anderson handles it with ease. In this opening and lengthy scene, the narrator tells us, after Shasta gets to the dirty details of why she has dropped in on Doc:

“Back when, she could go weeks without anything more complicated than a pout. Now she was laying some heavy combination of face ingredients on him that he couldn’t read at all”

The acting in this opening scene by Phoenix, using his face to convey what is running through his mind while his words try to hide this fact, and while this is happening the narrator is giving us their history together… it is all perfectly acted, arranged, directed, coloured. This is only the first bloody scene and we already see a new direction for PTA. His use of narration is not intrusive, positioned in perfect harmony with the dialogue and on-screen action, while also acting as a sort of brief, psychedelic summary of Doc’s investigation at times. It is handled by employing one of Doc’s friends, one who isn’t wrapped up in his investigation. This choice is perfect, as she is only seen physically in a few scenes, and the only person she speaks to is Doc. May I pose the question: Is the narrator of this story simply a drug induced hallucination for Doc? There is no definitive answer, as this film does not make it easy to come away with such a thing on many occasions. I feel this is a positive as countless elements of the film can be taken many ways, depending on who you are. The most obvious example of this is: what exactly is Doc’s case? By film’s end, has he solved the case? Does he even know? This film really shakes up the ‘mystery’ genre and turns it into a bad acid trip.

That latter question though is a good one as, true to his lifestyle choice, Doc is smoking or huffing something mind-altering in nearly every scene he appears in (and this aspect is toned down in comparison to his drug use in the book!). While one may sigh in dismay at what initially seems like a stereotype, it is far from it. Remember, Doc is still stuck in the mid-60’s, and as far as he is concerned, a joint a day keeps the doctor away. What removes his character from a stereotype is, apart from a few scenes relevant to the plot, all Doc uses is weed. We all know now that it is a relatively harmless thing, but this asks us, can he do his job when flying high so often? A detective? The way I saw it, his drug-use doesn’t hamper his ability at all for the most part; more apparent and more of an obstacle though is the disdain society now has for his kind, despite the fact that he is obviously not a stupid man, and rather sane, yet his thoughts are often dismissed as ‘paranoid hippy delusions’….

… But if you think about it, considering the eclectic cast of characters that Doc deals with throughout his investigation, one could argue that he is the most grounded and sane character of the movie. Perhaps the most enjoyable aspect of this film is the fact that despite our hero is a dope-smoking machine, many characters he deals with seem to be far from sane, or perhaps using something more exotic themselves.

We have a very strange, frozen chocolate-banana eating cop who doesn’t work with a partner and treats Doc like he is subhuman, a saxophone player turned government snitch, a very odd and inexplicably unsettling doctor obsessed with a film character to the point of knowing all his lines, and perhaps the best example: Martin Short in an unforgettable role as a cocaine and young girl-crazed dentist. Other characters warn Doc of the ‘Golden Fang’, which seems to refer to at least three different things according to different people. Some of these characters aren’t integral to the plot, some are, some could be, for we seem to know as much as Doc. Most of them though leave a not-quite-so-sane imprint on the movie, and many of their actions are hard not to smile at.

Thematically, apart from the death of the 60’s peace movement (we hear about the Manson family more than once) and its transformation into perhaps its polar opposite, with paranoia and chaos replacing love and peace, buried deep under the investigation and the numerous red herrings surrounding it is a simple tale of love. It is made obvious in the aforementioned opening scene that Doc obviously still feels for Shasta, but it is never made quite clear how close, or in what way does he feel? Love is not a simple thing and never will be. An old flame that suddenly reappears is surely imminently relatable to almost anyone with a heart. It stirs up feelings and behaviour that was once thought dead.

Much like almost PTA’s entire filmography, you need to watch this at least twice. There are a lot of characters to keep up with, and many themes and people come and go as they please, all of them memorable. Visually, this film is a massive departure from his last two films. It certainly is nothing like TWBB or The Master in terms of how it is shot, nor the way the soundtrack is handled; there is no dissonant classical pieces of music to be found here, nor lengthy takes without dialogue. However, all the characters are as interesting as Daniel Plainview or Lancaster Dodd, if not more so as there are that many of them. The storyline is even more bizarre than The Master, and the entire film is hilarious; its humour for the most part is restrained and subtle, very much opposite to the darker tone of his previous film, and for the most part is the anti-thesis to standard US-comedy these days. This is not a Seth Rogan stoner comedy. In fact, this film couldn’t be further from such a thing.

I could go on further about the magnificent use of colour and lighting, the facial close-ups capturing emotions without words, how about the soundtrack that places you directly in 1970 with both original music and selected creations from the period. How about the small number of, but still stunning shots, such as the hippie’s ‘Last Supper’ shot which teases you for a mere few seconds before it is yanked away.  The list spirals on, I honestly could go on for another week. But I’ll try to wrap it up here, as I already have a mini-thesis on my hands here.

5/5 – One of the best young US directors hits another one out the park, and in doing so departs for the most part from techniques used in his recent films. He has created a fantastic adaptation that perhaps works even better on the screen – though the book is a damned good read, Pynchon’s writing reminds me of Hunter S Thompson much like the movie does. Adaptations can be tricky, especially one that is so massive in its population of characters. Anderson has used all the best parts of the book, and in a run-time that is around the same of brainless-blockbusters these days, he impressively tells the story while imprinting many of these wacky folk into your memory. definitely one of those films that you will get something new from every time you watch it. Yet another perfect score for the awards season!