Bugger me drunk, it’s the end of the year already! So many films to write about, time to get off my lazy arse and finish up my favourites of the year. I’ll start with one fresh in my mind, one that looked spectacular on the big screen.

Firstly, kudos must go to Timothy Spall, Mike Leigh and the rest of the cast – top to bottom – for resurrecting and realising a period film so accurately and convincingly.  From the opening scene, one so beautiful it could be a framed Turner, to the unique, haunting but still classical score, unlike anything I have heard before, this truly is a trip back in time. Add the incredible outfits donned by the entire cast, and then finally the incredible manipulation of voices amounting to a fascinating array of accents; you’ll be taken back in time. This was flawless almost to a fault though… As the movie started I couldn’t help but constantly wish I could somehow enable cinema subtitles, as the accents of the period are nailed so perfectly that a good fifty percent of it sounded like gibberish and especially mumbling. Even sitting in the middle of a cinema I was forced to use uncanny amounts of mental effort just to piece together every conversation. This sensation though lessened as the movie went on as I got used to the characters’ voices, not to mention a lot of Timothy Spall’s lines seemed intended to be unintelligible mumbling. He could certainly be understood perfectly at times; at others, not at all. However I can hardly fault the movie for nailing the accents of the period, not to mention that after 30 or so minutes had passed, I wasn’t particularly bothered by it. I imagine many might be though. I mean, US television does have subtitles for other English-speaking countries (such as the country where the language receives its name, not to mention my home turf too!) so I can’t imagine this going down especially well stateside, though I may be wrong. 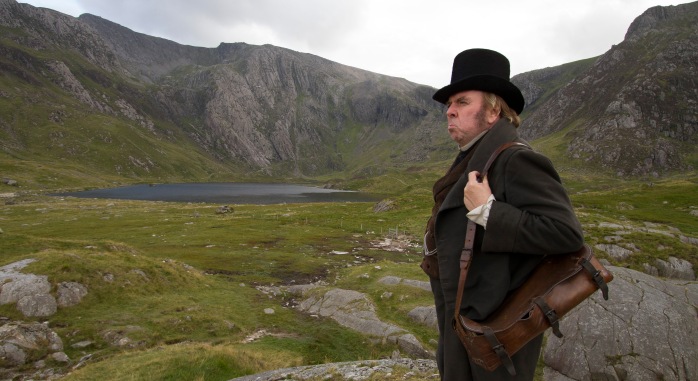 Not being familiar with Turner, as I wasn’t with James Brown earlier in the year, nor Nick Cave also, I happily went into this movie not knowing what I was going to be presented with. Immedietely apparent is the subtle but picturesque cinematography, with occasional static shots of amazing views added as a nod to Turner’s landscape work. Unfortunately, I had to research a bit after the movie ended to have the faintest clue of Turner’s art. You see, this does not have the incredible vision and honesty that Nick Cave gave us about his work and his creative philosophies earlier this year. Very different movie, yes, but both featuring real artists with bodies of work, I was expecting Mr. Turner to explore the concept of art, the state of art in the time and country the movie was based in, Turner’s painings themselves, anything about his bloody art! This could have been the perfect canvass (sorry) to paint a picture of how the man thought, how he approached a blank canvass, what his specific attitudes were, what art is in general, or hell, even a glimpse into the relevance of his work would have been nice! Sadly, this grossly overrated movie does not take such a path. The conversations about art are strictly limited, though we do get an entertaining conversation about gooseberries which made me smile, though I’m not entirely sure if that was actually the intent. Forget the art; this is a clear cut drama with Oscar-bait plot points that are milked for all they are worth; a drama that just happens to be based on the events of a once living person. That is all. Anyone wanting to delve into Turner’s art, move along. Avoid this movie as if someone is pissing in the wind. You will not like this movie.

There is no doubt that the drama is deftly handled and again one of the finest period films I have seen. However, the movie has another problem, this one probably larger. It doesn’t flow at all, the movie seems to assume that the viewer is intimately familiar with the life of William Turner. Which is a sad, pretentious attitude to have as this causes the movie to feel choppy and confusing at several moments. At one point Turner uses one of his many initials to stay at a hotel. There is no mention of where he is staying, or why, and because he has used a name other than Turner it looked to me that he was ducking out-of-town for an unexplained reason under a false name. This wasn’t the case at all, I think, but I still don’t know why he stayed at the hotel, or where it was. This problem extends to his art, as mentioned. His specialities and interests are barely glossed over, his technique is seen but not discussed at all, and not once does he talk about his work or offer us any insight at all. He shows off a bit in one scene and that about covers it. Another artist, who I later found out was John Constable, another important English landscape painter, features in four scenes and I’d have to look it up to know why, as the movie dismisses him as a nothing-character without bothering with an explanation for his inclusion. Feeling the need to look at Wikipedia during a movie cannot be a good thing.

I may have missed something here, but a movie about an artist… shouldn’t that feature his art? Yes you see his work in the background hung on walls and in galleries, but that is the most you will get from this movie regarding the man’s work. I am none the wiser about William Turner after watching this film; nor do I know anything about his paintings and overall style and ethos. All I know is that his life events make for an emotional drama, and I also must credit the writers and Spall for capturing the eccentric nature of Turner, especially the numerous grunts that made up a third of his vocabulary. It wasn’t too obvious, in fact it was probably a little to subtle; if the movie had focused on elements such as Turner’s eccentric personality, rather than the emotional events of his life, this could have been a magnificent movie. Everyone loves an eccentric! But no, this is a technically well crafted movie that fails almost entirely to investigate the mind and the art of William Turner. The titular character. I’m not sure how that cannot be considered a failure in some sense.

Very pretty to look at with an emotional plot based on true events, I’m sure this will garner its fans. But the pure disregard towards Turner’s inner self, his painting, his philosophies, almost everything bar the main emotional events of his life, is rather surprising and makes for a dull, seen-it-once-you’ve-seen-’em-all type of drama.

← THY CRITIC MAN & EPILEPTICMOONDANCER TAKE ON THE HORRORS OF CHRISTMAS!
NAS: TIME IS ILLMATIC [2014] →