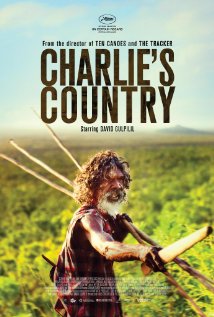 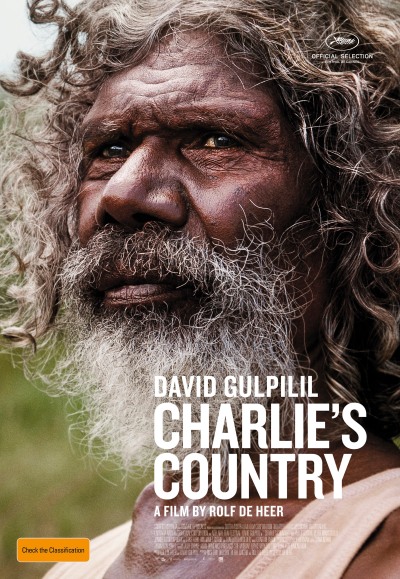 I thought The Mule was the most Australian movie I had seen for quite a while. And it is, in terms of Australian humour. But then I realised that this film had finally made its way to DVD, after I missed the absurdly limited screening that this movie received down here, and immediately rented it out. This is one of the most important Australian films ever made, and the lack of support or promotion again sickens me; this country’s government does not give a shit about film. But moving on, Rolf De Heer is an Aussie director who has been around for a fair while, and this certainly isn’t his first venture into topics revolving around the native Aboriginal people; The Tracker perhaps being his best-known film. Charlie’s Country is an intimate look into the life of Aboriginal communities and the fractured relationships between young and old, black and white. There is no overt racism, this movie isn’t Crash, it doesn’t try to stuff its message down your throat. But that judgement, however unassuming, lingers throughout the entire film. It isn’t an exaggeration at all unfortunately, it is powerful in its seamless nature, feeling almost documentary-like. This feeling helps portray the reality of the situation for native Aboriginals whose lives and communities are clashing with those of ‘whitefellas’, in particular the police, often for reasons that confuse the native people.

This is the unfortunate and rather despicable reality for many communities like this, if not worse, and as the film progresses Charlie quickly becomes a character that you want to root for.,He is a strong character with a wi

cked sense of humour, an unpredictable nature at times but a steadfast resolve to live the way he feels entitled to. On his land. Through the experiences of Charlie we get an accurate and probably understated look into the life of Aboriginal communities, their relationships with the ‘whitefellas’ of the area, all of whom are in positions of power, and how the police control many elements of their lives – almost solely for the worse. While following Charlie, we see how this clash of cultures affects him, his friends and his community; as his native traditional way of life is consistently being threatened as modern society wears on. There is little to speak of regarding the narrative, the plot is thin – but with subject matter as strong as this, who needs a plot? This is an unapologetic character study of a middle-aged Aboriginal ‘blackfella’ stuck between his traditional ways, living off the land, his land, and the confusing rules of modern society; as enforced by white Australians who are now on his land, land that he once was able to live on in peace.

Almost shot like an art film, several minutes pass at the beginning of the film without dialogue, without any movement of camera as we study Charlie’s facial expressions and body language. This feeling doesn’t leave the film, with a smaller amount of takes than normal combined with a very minimalistic approach to the cinematography. Add to this the minimal soundtrack that isn’t present for much of the film, and you know that this movie is one of atmosphere. It isn’t dark, but it is pressing and engaging as we are thrust into the middle of Charlie’s community and his psyche. The brotherhood of Aboriginal people is shown through the first few scenes, but the tone takes a shift towards desperation and frustration as modern society drags Charlie further and further down. Talking to a white community worker at one point he bluntly asks for a house. When told the reality of the situation, Charlie replies:

It is a very short scene but a powerful one. There are many like this, and they vary as Charlie becomes further disillusioned with the community he is living in. The further the film goes the more you feel for Charlie, I actually felt more than a little anger towards how our native people are just shat on really, their culture not even acknowledged, let alone respected. This powerful character study is wildly fascinating: Charlie is a humorous, funny, easy-going guy, but he has his vices which he blames on the few white people who run th 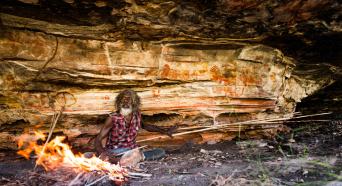 e community. At one point, after having his gun banned because he doesn’t have a license; a foreign word to him essentially, he then fashions a spear to use for hunting… Only to have that taken away by the police also. This enrages Charlie and he decides to ‘go bush’, to try to connect with a culture that is dying but still a part of him. His journey though leads to very mixed results. Once on the other side of this journey, it is obvious that Charlie is a wiser man. His experiences strengthen him and give him a strong sense of humility and perhaps tolerance. He also appears in almost every scene and actor David Gulpilil, easily the biggest Australian Aboriginal actor, does a perfect job of nailing the highs and lows that Charlie experiences. His silent acting must also be credited, as mentioned there are many scenes with no or minimal dialogue, and these scenes are often lingering closely on Charlie’s face, Gulpilil expertly acting through facial expressions, body language and minimal, often muttered dialogue.

The depiction of an aboriginal community with a police station smack bang in the middle – run by whitefellas of course – is done deftly. Again, the racism isn’t shouted from rooftops, rather it subtly presents itself as we watch how the natives and the white folk in charge interact. The effect of alcohol, a legal drug that has been introduced to these communities is touched on as well; I found myself surprised and again angry at how these people are treated regarding alcohol, considering it was originally introduced by white settlers to these communities. Furthermore, none of the white characters are looked at suspiciously at all; drinking is a’okay if you are white!

I can certainly vouch for this unfortunate reality of Aboriginal folk being looked at suspiciously if drinking, and even if not, I find a majority of people will sit as far as possible away from any Aborigines on a bus or train. It is rather disgusting and I am not proud of this country and its ignorance of the people whose land we raped. Aboriginal people don’t give a rat’s shit about an ‘Apology Day’, with the Prime Minister ‘officially‘ saying “sorry” to the Aboriginal community. As if this means a fucking thing! I am not Aboriginal but I am sure they would agree with this notion, and would vastly prefer actions over meaningless words, uttered by a politician no less.

Every Australian should see this. It highlights countless, true-to-life elements of how our native population is treated, still, to this very day. But it also displays the immense pride in tradition that the Aboriginal people posses.

← The Ten Most Iconic Female Movie Characters Blogathon!
THY CRITIC MAN & EPILEPTICMOONDANCER TAKE ON THE HORRORS OF CHRISTMAS! →