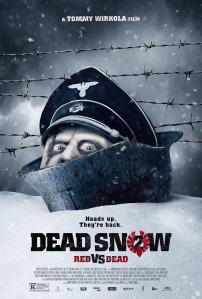 This is truly one of the most absurd, bizarre and hilarious ‘horror’ movies I have ever seen. In fact it doesn’t seem like a horror movie at all, but I guess anything with gore everywhere will get that horror or slasher tag – which to me are two very different genres. The movie that I saw though was black/shock comedy all the way through, a comedy that just happens to include graphic action and constant, ferocious violence.

I had no idea what this was going in, I hadn’t seen the first one nor did I know of its existence. I went in blind and it made for a very surprising movie! It didn’t take long for me to start hurting from laughter. Each act of violence is absurdly over the top but a cartoonish, which helps it manage to be hilarious. Kinda like the Coens at their best, but cranked up on speed, armed with bucket-loads of blood. Oh, and of course extremely vicious Nazi zombies. And Russian zombies. Hell, it’s a war film disguised as a zombie romp!!

Of course the movie is about Nazi zombies, so that is letting you know instantly that this film is for fun and not for scares. The sheer absurdity of the plot and the characters’ actions and personalities make this film instantly enjoyable, the movie giving you a giant wink many a time. I didn’t expect much at first. “Nazi zombies? Really?” I’ll admit were my very first thoughts. But the comedy does not take long to come out and play, and from that point on I couldn’t stop watching. I couldn’t stop laughing! The movie doesn’t try too hard, yet there are laughs around every corner. The comedy is very creative too, especially considering it is working within the confines of a zombie film and ‘horror comedy’, which is notoriously hard to get right. I lost count of the great funny scenes that were entirely original.

This excels as a ‘horror comedy’ perhaps more than Shaun of the Dead did, though for completely different reasons. This is brutal from start to finish, and most certainly does not take itself very seriously. The writers know what kind of movie they are making and it is obvious that a lot of fun was had making this, with absolutely no regard shown towards whether the comedy will appeal to a small or wide array of viewers. Once it starts it doesn’t stop. The movie apparently kicks off straight from where the first ended, and it quickly shifts up through the gears.

There are many characters and scenes that seem like parodies of idiotic characters from other, extremely poor takes on the zombie/horror genre… Zombieland comes immediately to mind… The characters are clichéd to all hell, each one of them intentionally overacting, making for some classic scenes that could almost come from a more ‘serious’ zombie film. Of course these elements are exaggerated to great effect, and the characters are hilariously cheesy and fun to watch despite their shallow as a fish pond characters and consistently cheesy lines. Some almost seem excited at the prospect of trying to stop a horde of undead Nazi soldiers hell-bent on unleashing carnage on every human they come across.

The movie somehow finds another gear around halfway through, as the nazis manage to get ahold of a tank!! With the ‘Captain’ of their army sticking out the top the ancient yet somehow fully functional tank like an undead Erwin Rommel, nothing is safe, nothing is sacred: each time that turret starts rotating I had to prepare myself, as this movie quite literally will hurt you, along with anything in their path. The gory scenes especially had me almost in tears, I loved the way that comic, cartoonish violence was used to such great comedic effect. I can definitely say that this is the first time I have seen someone rip out their victim’s intestines, then proceeding to strangle them and others with it. Good God!! This movie does not have any limits, whether you are pushing a pram or trying to get away on a wheelchair, you are fodder for laughs. I’m not sure I really know what being offended means to be truly honest, which perhaps is why I was rolling around in laughter at the most politically incorrect, violent scenes that were intentionally made to illicit laughter.

I think another of the reasons this feels so fresh as a comedy is because it was made in Norway, and it appears that their sense of humour is very different to that of the US or UK. They obviously have no qualms offending anyone – unlike almost every mainstream comedy to come from the US – rather they intentionally include as many ‘wrong’ scenes as possible, and revel in it. Their obvious lack of interest in how the movie would be perceived also must be admired. If only more filmmakers had the same attitude, we’d have a lot more fun movies to watch, and less turds shat out by committee, with no obvious personality at all.

This is one of the most violently funny films I have ever witnessed. It is easily one of the most violent movies I have ever witnessed too, it makes a movie like Saving Private Ryan seem like playing with fluffy kittens on a playground in terms of sheer brutality. It is certainly not a movie for those who are squeamish. However, if you are a little twisted, like myself, you will be in for a real treat. You will either laugh yourself breathless, or will press stop after only a few minutes. Happily it was the former in my case, and rarely for me, this is a comedy I can see myself watching again, as the entire ride is so fun.