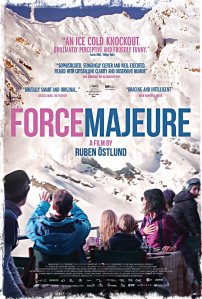 Never before has a movie left me so profoundly confused as the end credits rolled. Perhaps it is the culture (the director is Swedish and they are on a vacation in France, while I am located down undaah) but the comedic quality of this film went over my head so far that it took at least 24 hours of random and spontaneous thoughts about the experience to realise that for a decent portion of the film, I had a smile on my face. I was laughing. Yet when it ended, I felt disappointed. Why? Expectations, never a good thing.

Perhaps it was because it is Scandinavian and I was expecting it to go into creepy Ingmar-Berman-territory. It does explore the human psyche like Bergman, but this film is almost like if Bergman were to make a comedy that retains the psychological edge that most of his films have. Similar to much of Ingmar’s work, this film involves an interesting character study of a man whose personality doesn’t quite add up. He is on vacation with his family as he works so much and doesn’t get to see them often. It is clear that his marriage is obviously teetering on a cliff-top. That is the basic premise of the plot, but Ruben Östlund takes that concept and turns it on its head, spinning like a top.

Rather than aiming for an unsettling atmosphere, the writers have decided to go with a lighter, though still dark and somewhat unsettling, comedic approach to the recipe. Make no mistake though; as funny as this is, it is even more beautiful. You could say that this is a given, but several unique approaches to just simply shooting The Alps are used, one that initially looks like a UFO is present, another a perfectly framed shot of the slops with one skier, followed by a second moments later, as one follows the other in skiing side-to-side along, following the same path: all bathed in silence.

The beauty of this film is quite staggering; sitting only a few rows back, I found myself staring at many of these shots with my mouth agape, truly in awe of the visual brilliance stretching out in front of me. There are a lot of long, still takes, and the way the indoor sequences are shot are slightly reminiscent of Kubrick. This is most certainly a movie that needs to be seen in a cinema, no question. Either that, or a really big telly!!

Let’s rewind. To begin the film, controlled avalanches are booming in the background as the family dine at a restaurant with a beautiful view. Soon one of the avalances becomes not so in control, During the conversations that follow Tomas’ heroic act to kick the film off, a series of close-ups of the faces of each character, mixed with shots of Tomas and Ebba, really worked fantastically as it conveyed and explained most of that scene; subtitles unnecessary. That is how well this filmed, and how fantastic a piece of art it is to look at. Cinematograher Fredrik Wenzel did an outstanding job. This is certainly one of the best looking films I have ever had the pleasure to watch.

The approach to comedy is where this flick is at its most unique. Perhaps it is a cultural thing, though I’m of the simple belief that I am just intensely thick: this movie somehow didn’t feel funny while watching it, but has me chuckling right now just thinking about it. I can’t think of any movie that has had that effect on me. Further from that, the humour is varied and off-beat, sometimes very dark, and a lot of it stems from very simple scenes during which the couple discuss their experience and Tomas’ in particular, with two couples in particular who both react very differently to the tale. One comically trying to convince Tomas there was a good, ‘survivalist’ instinct that excused the fact that when sensing danger, in a scrap of a second he didn’t even glance at his family, rather he bolts out of there in the opposite direction like a starving greyhound. When the mist had passed, and everyone realised it was nothing, he calmly returned to the table, and sat down like nothing happened. He then honestly wonders why not only his wife, but his children, aren’t very happy with him.

His incredible stubbornness and ability to lie to himself, despite pissing his entire family off, makes him one of the more memorable characters I have seen this year. Again, in retrospect, the entire scene where his friend insists that there was a fair reason for his abandonment of his family… Well, it was hilarious! I’m laughing now just thinking about it. Always good news for a comedy. A good thing then, that I thought about this a bit before I decided to begin putting my thoughts to paper!

4.5/5 – Both funny and astounding to look at. A great one-two, much like The Grand Budapest Hotel, it too excels as one of the best films of the year. I also know I need to see it again from this new perspective, as in hindsight, I’ll be able to laugh and see how funny it is without need for reflection later. Which, let’s face it, is the ideal way to watch a truly great comedy, wouldn’t you agree?