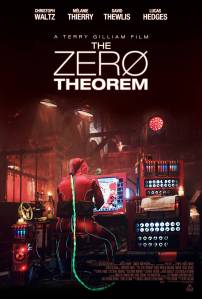 Do we have here a return to form for a director who arguably hasn’t made a movie worth watching for 15 years? Or does this simply continue the consistent downward spiral that has been Gilliam’s recent output?

Gilliam’s quick quip was something along the lines of, “Brazil for the modern age”. Well let us see: The quirky British and often dark humour? Check. Otherworldly design and an amazingly creative world? Check. Wide lenses and crazy angles? Check. A main character who is constantly bewildered and consistently out of his depth? Check! Things are looking good so far. The movie also comments on our society today, most prominently through Qohen’s (Christoph Waltz) lack of communication skills; an apt analogy for the decidedly physically disconnected society that we now inhabit.

This flick is the third of Gilliam’s loose trilogy of dystopia, following Brazil and of course 12 Monkeys, released a good 18 years ago!

So. We have an intriguing concept, and the suggestion of similarities to both Brazil and 12 Monkeys is enough to make me salivate. But is this any good? Or does it simply use its predecessors as bait to draw in viewers?

Well I can certainly answer that query with a resounding ‘no!‘

This movie is reminiscent of Brazil in every positive way possible. Gilliam couldn’t have summed up his new creation any better. This movie is remarkably thought-provoking, probing many aspects of modern society without delving too deep and getting preachy. Much like Brazil, a blockbuster film this is not, and this is where Gilliam belongs: on the outskirts of Hollywood, doin’ his thang without a care for public opinion.

Needless to say, Christoph Waltz is incredible, being on-screen almost constantly. The emotions he manages to evoke just with his face is quite something. Opposite him was Melanie Thierry, who plays a great role that really will make you wonder about her true intentions. I could never tell if she was genuine or not, and her role was just one of several elements of suspense that ran throughout most of the movie. The other smaller characters were all filled with detail and humour – the doctors near the start of the film, Qohen’s (Waltz) boss at the beginning of the film (who I think was in Brazil himself many moons ago) and particularly the elusive Manager’s teenage son, who was an especially funny and quirky character. Matt Damon’s very understated role as the ever elusive Manager was spot on it its subtlety, and suited the film very well. All these characters work together seamlessly, creating a cast of typically eccentric Gilliam creations. In addition to this cast of eccentrics, Qohen speaks to a shrink in the form of ‘Dr Shrink ROM’, who (played by Tilda Swinton) is an amusing and extremely unusual character, in that she isn’t really a character at all in any conventional sense. As her name suggests, she is merely a piece of software that somehow manages to help Qohen with his many issues, and who also can be programmed at will by the right mind. And as for the ‘Manager’, I am still not sure if he was real or a software program, not unlike Dr. Shrink ROM. As mentioned, this movie is a puzzle, and if you are at all serious about film, you owe this movie your close attention, in addition to more than a single viewing; such laziness will surely lead you to miss at least half of this film’s delightfully unconventional plot.

A warning though: Those who are slightly dim and/or too lazy to think about the movie, let alone to watch it more than once, will not enjoy it. If this is you, stop reading now and focus on something a little easier to understand.

Considering the limited time-frame Gilliam had to work with, in addition to a measly budget, he has once again created a thoroughly unique universe for his characters to inhabit. From advertisements that follow those walking by them, to the constant and strange actions Qohen is required to complete at his desk as promptly as possible, all the way to the abandoned church that is to be where the Zero Theorem (or ‘Zippity T’) will be solved; this movie is a never-ending visual masterpiece. In contrast to the last two movies in this loose trilogy, the outside world is not a sea of grey; rather it is filled with bright, neon colours, even including a pizza delivery girl dressed entirely in a hot pink outfit. The scenes where Qohen leaves this reality behind are equally picturesque and drenched in colour, especially the final scene, which I could not take my eyes from.

This is quite easily the best output from Gilliam since Fear and Loathing. Parnassus was a somewhat fun ride, Tideland was a dark film that has always been extremely underrated, but this here is classic Gilliam at his best, with creativity practically leaping from the screen. Fans of his style will eat this up.

Terry is back, and he is in top form, rattling the cages of traditional movie-making in a way that only he can do. All I can add is, what will he bring us next? The elusive Don Quixote movie that has caused him so much trouble? Or another new, fascinating story to again polarise audiences across the world? Either way, I am now firmly in the position of eagerly awaiting what this creative maverick of a director will present us with next.

4/5 – With a bigger budget and a slightly longer time-frame to shoot, this really could have been quite something, with perhaps more of a look into the bizarre universe that Qohen inhabits. Despite this, what we have here is a fascinating movie that challenges you to figure it out. Not recommended for the lazy movie-fan.