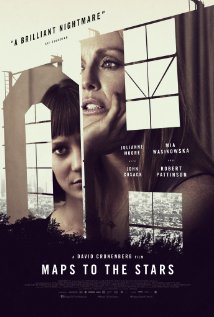 A very pleasant surprise to see this earlier than I was expecting. After Cosmopolis, which I enjoyed despite its many flaws, this multifaceted movie lifts the basic themes from Cronenberg’s previous effort and melds them with the insane world of Hollywood, while also creating a fascinating array of eccentric characters. This film has the obvious set-piece of Hollywood and its ills, but this is just a first layer, and a sort of framework for the rest of the movie to thrive on. The author of the screenplay (Bruce Wagner, former chauffeur) even commented that making a satire of Hollywood was far from what he was writing. The movie is also relevant to our society today, transcending the Hollywood setting. We are presented with a thoroughly fascinating cast of characters whose actions, problems and secrets again go beyond the view that this film is simply a satire or a preachy message about the pitfalls of Hollywood. I don’t think that this movie could be any father from that concept. And once the movie begins to descend into Cronenberg territory, you know you are in for a treat.

This certainly feels like it will be Cronenberg’s most polarising film since CRASH. I have never seen such a film filled with an almost entire cast of thoroughly unlikable characters. Each one is hiding something, or is lying to themselves. There are secrets abound – and that notion is one of many that again turns this film into more than a sordid look into Hollywood. It certainly requires your attention as well: for me the plot only started to fall together around a third of the way through.

On one hand we have an actress who is insanely neurotic and slightly unstable. She seems determined to play her own mother in the remake of an older movie. Okaaay then! Next we have a dysfunctional family of Dr. Stafford Weiss (John Cusack, turning in an amusing role as a pseudo-spiritual guru complete with healing powers and a hot temper) and his wife. The child of this couple, Benjie (Evan Bird in a great performance for a young actor, one I had never heard of before), has been exposed to wealth and drugs at a very young age, but his attitude isn’t just accurate to the role he plays. His attitude is very familiar to me, as someone who works with young people, and who most definitely lives nowhere near Hollywood!

It was this character that I felt portrayed modern societies effects, and also obviously exposure to Hollywood, on young people perfectly. A good example of that is when asked about drug use, his response is, “I haven’t used anything, not even Seroquel!” which isn’t illegal, or even a narcotic. But people certainly abuse them, predominately young people; it is a medication for psychotic/schizophrenic people.

The plot kicks off with the arrival of Agatha near the beginning of the movie. She is shrouded in mystery, yet the viewer knows she is somehow integral to the plot. The path her character follows is what ultimately drives this film, filled with uncomfortable subjects and people hesitant to trust, paranoid folk with (or think they have) secrets that must be hidden. Their convictions are deep and their will to protect their loved ones, to give them a sense of ‘normality’ is another big theme throughout the movie. Such as the way Agatha was never seen without her gloves to cover her arms, as well as many other aspects that I cannot go into without spoiling the movie. This is one of the movies where you need to put your thinking cap on before watching!

This one is gonna rub some people the wrong way, there is no doubt about it. This is definitely the creepiest film he has done in a while. Of course that sense of creepiness is completely different from his earlier output, but Crash is this movie’s closest relative, along with Cosmopolis (for much different reasons obviously). A stellar job from one of my personal favourite directors. Could it have been better? The photography was bold without being flashy, and the soundtrack wasn’t a prominent feature, but the 80’s style sound of the synths gave it a unique sound as it bubbled in intensity as the movie progressed and got interesting. I’m sure it could have been better, but I am struggling to find a way how. My heart was in my mouth for much of the the second half, right up to the final minutes.

His best movie for a while, which says a lot because he hasn’t really made a bad film. This visceral look not only into the darker side of Hollywood, but also into the darker sides of the human condition make for some confronting but rewarding viewing.