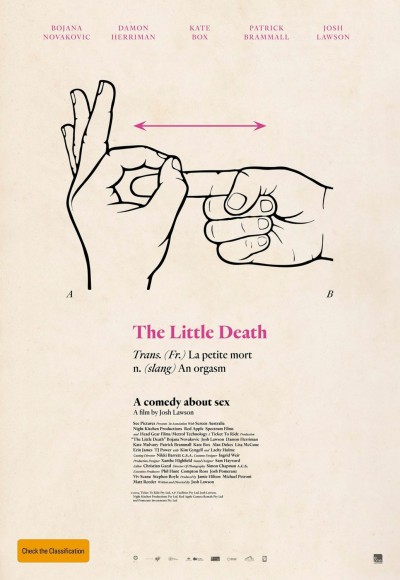 Now this one is certainly not for the conservative-minded, nor is this for the prudish viewer. At all. This movie will shock, but not in a conventional ‘shock value’ sense. The only reason this movie will shock is because it breaches taboo subject matter. It shocks because it brings to screen the dark reality behind sexual fetishes that are not as uncommon as you might think.. And then makes them funny. Extremely funny, laugh-out-loud, hold your sides in pain funny. The only reason anyone could be offended by this movie is because they are watching topics that they themselves are too embarrassed to talk about or explore themselves.

Josh Lawson has been around for a long time in Aussie entertainment, recently scoring more major roles for international productions such as Anchorman 2 and House of Lies. Throughout all this, for the last six years he has been penning this project, writing and re-writing. It shows, as the movie is damned near perfect. This isn’t simply a shock comedy about sexual fetishes, it is much, much more, delving deep into what makes relationships tick, how love can sometimes not be a great thing, and how spiteful marriages can go wrong… of course in this movie though, anything that does go wrong, goes wrong in hilarious fashion.

This features a simple plot that I will try to not rehash. We have several couples who are having problems. Near the start, one husband flatly remarks that his partner’s blow jobs are dreadful. Yes, this movie is that forward, so anyone who thinks they may be offended by this subject matter, WILL BE offended. One old man walked out the cinema in disgust when I saw this. Anyhow, this couples’ therapist suggests role-playing, and we are given a snippet of a definition of what role-playing is. This is probably the least extreme of the fetishes that plague this movie: as we have a husband who is aroused by watching his wife sleep, a wife who gets turned on when her husband cries (and in trying to make him cry further leads to spectacularly funny scenes), and finally a wife who wants her rape-fantasy fulfilled. Woah! And much like the first fetish introduced, each one gets its own snippet of a definition displayed on-screen.

What makes this film so well done is that it tugs at your heartstrings, at just the right times. Really, deep down this movie is an examination of relationships, how dishonesty can break them down, and furthermore, the ‘kinky’ fetishes that many people probably feel awkward about. The funny thing is, talking to my specialist, a neuro-psychiatrist, none of these fetishes are rare in any way. And the fact that they are explored in such an intriguing, funny way is a testament to the hours upon hours of research Lawson did for this film. A lot of the humour comes from these couples trying to fulfill their fantasies, to lets say, very mixed results. The wife who has a rape-fantasy is particularly confronting, as she tells her husband that ‘she can’t know it is him!!‘, causing him to attempt to concoct a brilliant plan to fulfill her fantasy, perhaps trying too hard to satisfy the woman he loves. Does it work out?  I won’t spoil anything, as this exploration of fetishes is a mixed bag of success, on the couples’ part. Ultimately, it is the honesty shared between partners that decides whether their attempts destroy or strengthen their relationships.

Several of the cast are writer/actors, and friends of Lawson himself, and he actively encouraged their participation. I think this shows in the realistic portrayal of each relationship. Not only was each character fully fleshed out, their relationships felt genuine. Not two actors stuck together in a ‘relationship’. No, these couples felt like real couples, whether madly in love, or on the brink of divorce/hatred. This is where the movie shines, as not only is it hilarious in the darkest of ways, it is varied, it has a heart, not to mention it is often painfully funny. Despite this, it can be heartwarming and/or heartbreaking, often in the same scene.

To say that such ‘taboo’ subject matter is handled with skill is a vast understatement. To learn that this is Lawson’s debut feature film is even more surprising, as he has created a near perfect dark comedy that has just enough sentimental value to exclude it from a simple comedy made for shocks.

Another intriguing aspect of this flick were a few side characters that will forever remain memorable. Without saying too much, one is a registered sex offender, door-knocking to inform his new neighbours of his past. Yet each character is so lost in their own sexual fantasies that none of them blink an eyelid when he confesses many a time of his past! He realises that his gift-giving to try to distract each person is suddenly unnecessary!

Finally, there is the final scene, which is almost impossible to describe without giving it away. But I will say this. It involves an interpreter for deaf people, assisting a lonely deaf man, via webcam, to call an adult service line. What follows is an almost impossibly funny sequence, involving lots of… Intense sign language. I shall leave it there for your imagination to ponder on. Needless to say, in an extremely funny movie, this sequence is by far the most confronting, which is probably why it is the funniest.

Starring many familiar Australian actors, this movie is unlike any other film, nothing comes close in comparison. Which, from what I have read, was the main reason Lawson had trouble pitching this film. Kate Mulvany, one of the leads and friend of Josh Lawson, has praised not only the film but Lawson’s approach to directing. “He follows that amazing rule of make them laugh, then break their hearts.” Kate was one of the many actors who were able to contribute their own ideas to the film, as Mulvany herself is an accomplished playwright. As for Josh Lawson’s final take on the film?

“We can’t pretend to be cool when we are having sex. We’re just naked bodies bumping into each other. And that is funny, and beautiful, and dramatic.”

He could not have summed up his film more succinctly, and I applaud his ignorance of social niceties to release this thoroughly dark comedy, covering social ‘taboos’ that really shouldn’t be taboo; buried under this absurd PC society we live in. This movie will make you fall out your chair in hysterics. That is if you like your comedy dark, and you aren’t a prude. If that is you, go watch this now! It will be worth it.

4.5/5 – I am struggling to figure out a way that this could have been funnier!