Well, colour me ignorant, I didn’t know TLJ had turned his hand to directing! In this, his second feature release, what is instantly striking is the photography, the chilling soundtrack complete with dissonant violin sections, and the incredible effort that has obviously gone into transporting these characters to the Old West. The costumes, the scenery/backdrops, the dialect of each character. All this effort translates into one of the most convincing period films I have seen in quite some time. Combine this with the direction and acting chops of TLJ and some dry but amusing humour (mostly from Mr Jones’ pleasant old coot of a character), all within a very interesting and unique story, and hey Presto, you have yourself a unique movie. 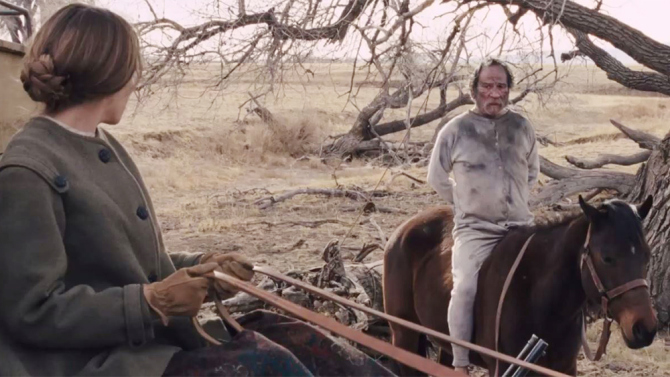 The small town that Mary Bee Cuddy (Swank) lives in seems to be filled with disgusting, filthy men. Perhaps they found themselves to be rather decent, who knows what sort of customs were appropriate such a long time ago, but what is instantly apparent is gender inequality, the main theme that runs throughout the film. Feminism, the non-insane variety, is very much the focus of this film, creating a very original atmosphere and against-type narrative for a Western. There is a problem spreading across this small town of the ‘West: women are losing their minds, lapsing into catatonic states that don’t allow them to offer any resistance to a male wanting his way. There are some very, very disturbing scenes near the beginning of the movie that show just how damaged these women are.

In fact, this is one of the most bleak movies I have ever seen, it reminded me of how Requiem for a Dream made me feel as a kid. However, there are many moments of dry, dark humour that had me smiling and this enough to prevent the film from leaving you feeling depressed. A decision is made that the women must be transported across the Wild West to Iowa, and this journey is what makes up most of the film; Miss Cuddy decides that the men of the town are not trustworthy, and despite objections from the other (sane) women in the town, she takes haste in preparing herself for a long, cold trip across the deserted American plains. As she says herself, “I can ride and shoot as good as any man in this town.”

Not long after she begins her travels to pick up her ‘cargo’ of three helpless, mentally ill women, she comes across a helpless old man sitting on horseback, a noose around his neck and his hands behind his back. In exchange for the sparing of his life, this rough and undependable man gives his word to help Mary Bee every step of their journey. Needless to say, Mr Jones brings this character to life, and he truly is the spirit of the party. Swank does a fantastic job also, playing the spinster role of the period perfectly. Both characters are intricately detailed. Much is revealed when Cuddy begs a local man to marry her, only to be rejected and insulted. Briggs (Jones) is a complicated man, with many scenes leaving you guessing what the man’s morals might be. Given the type of man he seems to be when we first meet him, his character’s development from start to finish is noteworthy and more importantly, realistic. What seems like a common crook out in the west is anything but. One can tell this has been adapted fropm the book as there are countless scenes that illustrate the depth of both characters. The rest of the cast was so-so; the citizens at the beginning were great, the arrogant Hotel Owner played by James Spader was also great, but the catatonic, mentally handicapped women were portrayed rather poorly and unrealistically. It doesn’t ruin the film entirely but it is very noticable. 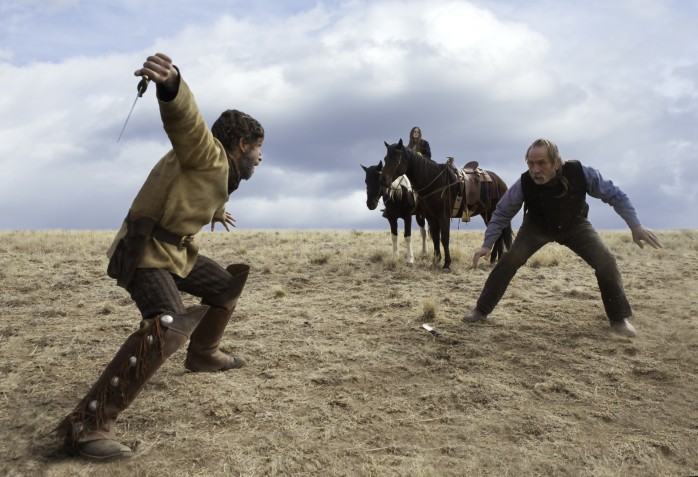 While this may resemble a Western in many ways, it really isn’t; apart from where the film is set. Yeah, we are in the west, and yeah, we have guns, we have the dangers of crossing the mostly untouched plains of early America, we have a run in with Native Americans. But the core of this story is not from any Western to come before or after. This is a feminist Western – one unique film to be sure – and is almost a throwback to the days of ‘auteur cinema’; Tommy has written, directed and starred in a deep, bleak and depressing film that moves you by its conclusion, and is technically impressive; it is obvious that each shot was taken with a lot of care as the entire film looks amazing. Cinematographer Rodrigo Prieto has done a rather impressive job with his view of the old West. 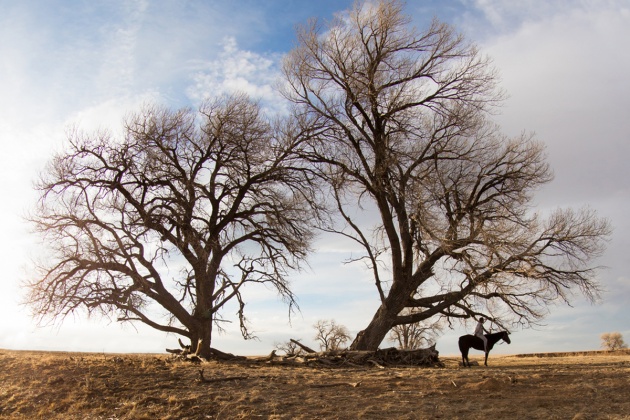 3.5/5 – Highly recommended for someone who likes their movies well shot, who likes their movies to provoke thought and discussion. The film’s biggest letdown is in it’s arguably unrealistic depiction of mental illness. Oddly enough, I saw Luc Besson’s name on the credits as a producer. Hmm… Perhaps he should stick to that position, as this is an engrossing film despite its flaws.