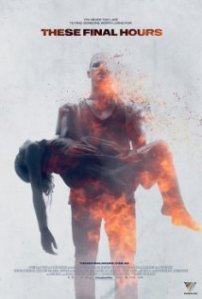 The world is coming to an end; a meteoroid strike has caused a chain reaction that is gradually engulfing the entire planet. When we start, a radio announcer informs us of the situation in a grim tone, telling us nonchalantly that Europe no longer exists. The end of the world is 12 hours away, and the same radio announcer occasionally is heard in between scenes, informing us of the destruction of the rest of the planet. With this certainty approaching, the lead character James (Nathan Phillips) decides that he doesn’t want to feel it, and just wants to get ‘fucked up’ in true Australian style. So, despite some major emotional obstacles, James decides that he cannot miss this party to literally end all parties. But when he witnesses Rose (Angourie Rice) being abducted, he cannot bring himself to steal the abductor’s van for his own use as he hears her screams. Suddenly, this stereotypical alpha-male has to decide if he can really be a man and look after this young girl.

Both lead actors put in stellar performances, with only the script holding them back from being close to perfect; as on a few occasions the script sunk into sentimental soap opera territory. Thankfully these moments were few. Nathan Phillips did a solid job; the way his acting progressed alongside his character’s development as the film went on was great work. However, I was extremely, extremely impressed with the young Angourie Rice. She is plunged into a bleak and very messy world, but has the acting chops to pull off a variety of emotions that couldn’t have felt more natural, and put many experienced actors to shame. Moreover, the chemistry between the two leads was perfect, as both their characters, and their relationship, developed steadily and deeply as the film moved along. This is a brutal movie with many violent scenes; but it has a heart.

It very much starts off with a bang, as the title of the movie is shown in a very abrasive fashion, and barely five minutes in there is tense conflict. It also has some great, albeit very dark, Australian humour that may or may not go down with viewers abroad. The narrative/plot is sparse, and rather than a story, the movie feels more like a series of events unfolding until the credits rolled, presenting a character study of this egotistical young man who has to really look within himself. Given the post-apocalyptic concept turned upside-down though – they know the end is coming – this skinny plot is more than enough. There is also more than enough action, and while this isn’t intensely violent, when it is, the blood really does spill.

Both the visuals and the sound of this movie are something to admire. For a first feature film, Zak Hilditch has created a very unique style for himself, with many interesting shots of the sun, the clouds; the nature that is ready to be burnt alive, not to mention the stunning, spine-chilling visual feast of the final scene. It will take your breath away. The sound was also extremely well executed; not only was the soundtrack appropriate for the movie, silence was used very effectively, and subtle effects like the sound of ears ringing, blocking out all other sound, were used purely to convey the intensity of the emotion on screen, and these two elements of the movie were perfect.

This isn’t your average movie. It is visceral and endlessly pessimistic, but at the same time is filled with emotion and hope. While the script does let the movie down at times, these times aren’t often. The movie is predominately populated by memorable, eccentric characters, many with heads full of eclectic drug-cocktails. The subject matter is heavy, but it is handled deftly and with a heart, culminating in a brilliant film, even more-so considering this is the first feature film for the Aussie director.