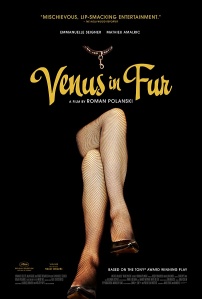 The short plot synopsis for this film is so misleading. But you know it is Polanski, so naturally something, probably strange, will begin to transpire.

And strange it is. The actress arrives covered in rain, hours late, and is not on the audition list. Yet, with much persuasion, the director, reluctantly, agrees to read some lines with her, and after she starts he begins to take her seriously. He stops thinking she is a lunatic.

Suddenly his enthusiasm picks up and they are engaged in the lines. But as they rehearse, they argue over trivial matters like the placement of one of their characters, to the actresses’ perceived misogynistic take on the book the play as based on.

Each time they argue, something pulls them back into the story, and they are suddenly and instantly back in character. It is an interesting setup.

From this point on, there this a story within the play unfolding, and it begins to get very strange as you watch them rehearsing, then suddenly you realise they have actually been arguing for the last minute! It keeps you guessing constantly, and as they explore the subject matter further, the blurring of the play and reality increases as they both become more passionate about the subject matter. And into Polanski territory the film goes.

This movie is easily the best film he has made in the last 30 or so years. It reminds me of The Tenant, it has that sorta of weird, surreal and creepy vibe.

Kudos to Polanski, who, much like in Carnage, makes full use of the single set, in this case a small theater, with the final act of the movie actually taking place on the stage itself. The camera is constantly moving around the theater, not once was I bored, as while looking great, the dialogue is very intriguing; funny in a dark way at times, but also pretty messed up, which I guess is due to the original text, and who does messed up films better than Polanski?

I’m not sure of the running length, but this film felt like it was an hour long. It flew by, the ending was incredible, and due to the deft handling of the dialogue, the switching between play and reality, this is something I want to watch again immediately!

Word has it that he is working on a third adaptation right now. After the hilarious Carnage, and now this film, I can’t wait to see what it will be about. These last two movies couldn’t have been more different, bar the fact they are adaptations of plays. Where will he venture next?

And some say this master filmmaker has gone senile!? This is easily his best movie since The Tenant!