PT 2: DRUNKEN MIDSOMMAR RANTING ON THE BEST MOVIE OF 2019

So, it seems apparent then that one of the Hårga’s traditions once they reach the age of 72, the end the final ‘cycle’, they jump off a cliff, not before being carried like a king to the cliff beforehand. I’m sure this latter part makes some sort of sense, respecting one’s elders and whatnot, but it still seems odd that jumping off a cliff towards a jagged rock isn’t s big deal for these folk. And if they don’t die, they are to lie there in pain until so friends armed with giant wooden sledgehammers slowly amble up to the ‘victim’ – no need to rush, this person is only is extreme pain – and proceed to take turns in slamming a giant sledgehammer into his skull, almost like this this is a custom as well. A privilege to be shared around as those who casually walk forward share the sledgehammer around. All while the rest of them are smiling and chanting! Although on of the girls in the second pic pictures admittedly doesn’t look too happy! The leader of the Hårga’s recreational activity certainly seems to though.

When I first saw Midsommar, the final sequence of Dani’s boyfriend being burned alive seared itself into my retina and long-term memory, just before the smile that we see on Dani’s face, literally her first smile of the movie. This final sequences literally stopped my brain from functioning properly, I’d try to think and that was all that was there, this and folk free-falling off cliffs. This prompted me to joke brainlessly to my friend, “Now that is he ultimate way to dump someone!” I wasn’t capable to make an intelligent statement about the movie for about 15 minutes, and besides, while not intended, it kinda is the ultimate way to break up with someone. At a commune, in the middle of nowhere, burned alive!! Given how much of an asshole Christian was, it did seem fitting.

Pertinently, it was Pelle, the humble, friendly Swede who originally kicked the entire psychedelic freak-out into motion. Seeing that his friend was doing a thesis on similar types of people, he took the advantage to bring his friends to his ‘commune’ to be used by the Hårga, playing dumb when asked, appropriately, ‘what the F*CK?!’ after the rest of group grill him on why he didn’t tell anyone about the ‘tradition’ of diving off a cliff. It isn’t as if it just ‘happened’ either, there was plenty of time to say something before. He also plays the ignorant card as the people he brought, as well as another couple, begin to disappear. It also seems that Christian, in what mustn’t have been a hard task, has already been brainwashed by Pelle or one of many who drug him later on, as his response to people randomly disappearing in a condescending, “that’s TERRIBLE!” to Dani, only to then to promptly move onto the topic he was discussing with a local.

To be fair, after at least ten watches it became clear that there were several overt signs that blood would spill, among other things. And I clearly wasn’t the only one according to Google. 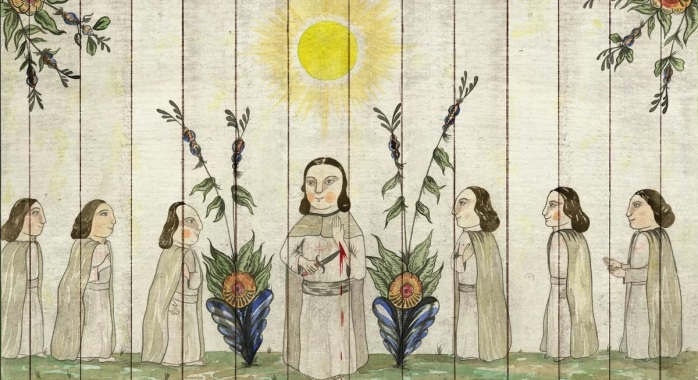 The painting above seems is obviously related to the chilling scene that follow this second image. But both seem to be a sign of what is to come: that blood will be shed, metaphorically that is. These may depict the blood of Hårga elders, but after this it is the visiting party who begin to go missing.

Unsurprisingly then, the Hårga were easily able to use Christian, his idiocy, ignorance and arrogance was the perfect combination for the two ceremonies he takes part in, his world becoming increasing psychedelic in nature due to being drugged several times, soon losing control of his actions as he is encouraged to ‘finish’ while having sex with a local girl in order to continue the commune’s existence, the girl exclaiming that she can “feel the baby!” immediately afterwards. The below painting from the film is rather self explanatory.

The second ceremony of course has him awake but only able to use his eyes – nothing else. The images of this scene will forever stay with me, not to mention the fact that he is able to witness, feel and smell his body being burnt alive without the power to do anything to stop it, to  even scream in pain. It does appear in the last picture that he is able to move his facial muscles though!

It is a savage ending to a psychologically savage film, predicted by another painting that apparent experts in symbolism disagree with me on. 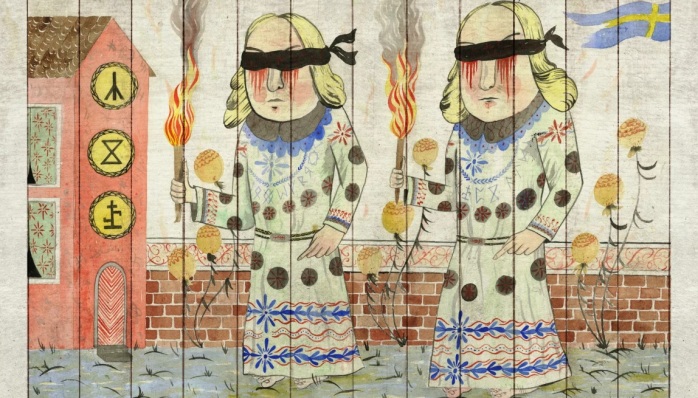 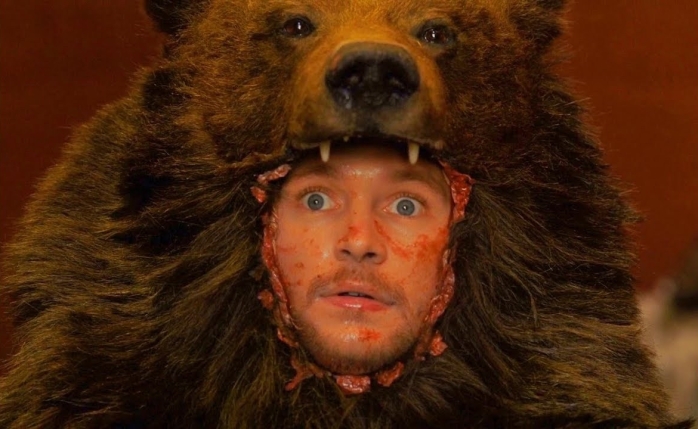