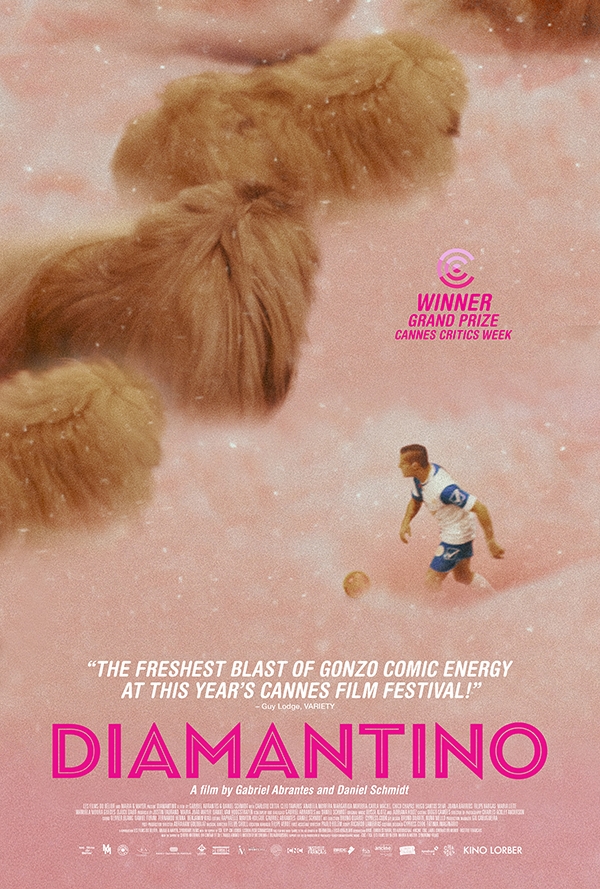 A bizarre film that is both hilarious and sad with many strange and surreal scenes, Diamantino is determined, maybe too determined, to be as ludicrous as possible. Somehow though, within the bizarre nature of the plot, lies an unexpected emotional core, with a pinch of social commentary for good measure.

The titular character is the best soccer player in the world who brings shame onto himself and his country on the field. An accurate statement on how quickly people are to judge athletes who fail on the biggest stage is the trolling that batters Diamantino. ‘Memes’ of his reaction to his own failure begin to emerge on the internet, he is abused by pathetic fans who hide behind their monitor. Subsequently, Diamantino decides to leave the football field for good.

This decision is much to the displeasure of his hilariously exaggerated and overplayed twin sisters who are more interested in the money he makes than his emotional state. They prey on his naive nature and feast on it hungrily.

Alone and depressed, Diamantino decides to adopt a refugee to start a new life, as in the past his father helped a boat of refugees, a key memory that carries heft and has stayed with Diamantino (who shall now be known as ‘D’). Already packed with many competing elements, there is the minor fact that when D played football, he didn’t see other players – rather, he saw giant puppies.

Before the catapult into thorough absurdist territory, when D adopts he becomes happy and quite content, but it seems like he is doing it for his own happiness, as Rahim seems awkward. It poses an interesting question about companionship, as Diamantino seems intent on being as close to Rahim at all times. Unfortunately his naive nature again rules the roost as he continues to show her unconditional love, which isn’t returned, and many of her actions go unnoticed.

At the behest of his twin sisters, he starts seeing a new doctor who is working on cloning D… without his knowledge of course. The goal? To create a super team of football players of course! The clone process however has some unwanted side effects, which are both impossible not to laugh at while simultaneously incredibly sad for D.

As mentioned, his naive nature plays a large role here. Despite being billed as the best soccer player in the world, he doesn’t control the money he earns, hell, he doesn’t even understand it. His twin sisters manage it for him and he never questions it.

Diamantino is certainly a feel good film despite what happens to him, as it is easy to identify with his narration. The narration doesn’t just help with the story – there is emotion in his voice as he speaks. We can follow how he feels while simultaneously watching is happening to him. This style of narration works well and often contrasts what has just happened or what is about to happen.

His undergoing of a sci-fi type study without a second thought, and his trust in Rahim, with no scepticism at all, again underlines his ignorance and empty head. Being naive can seem sweet, but it can also bite hard.

The winner of The Palm Dog Award at Cannes, some

scenes are so bizarre one can’t help but smile (see above). A man playing football surrounded by giant puppies is entertaining, full stop. The plot is almost too silly to work, but the humour and self deprecation all help it fit into place. This is a very strange film whose attitude is the opposite of taking itself seriously. Yet somehow, it manages to be emotionally and socially relevant. Close to being a throwaway mess, the competing themes work and it somehow balances these different genres near-perfectly. A must watch, extremely entertaining film.

One short of a sixer.