Directed and Written by Edgar Wright

Edgar Wright’s new film must be one of the most overrated films in recent existence. The last example of such an overrated film that comes to mind is the shockingly boring, unconvincing schlock that was the atrocity Gravity.

Having read reviews, and of course the absurdly high RT rating, it seemed like this was a film that needed to be seen. And hey, Edgar Wright has certainly made some great films and television, going all the way back to Spaced at the turn of the millennium, a great UK comedy series that essentially put Simon Pegg and Nick Frost on the map, leading to Wright’s trilogy of films that followed.

However. The words ‘virtuoso direction’ were actually used in one critic’s review, which seems like a slap in the face to the masters of cinema who have created infinitely superior films to this middling experience. Sure, the few car chases are extremely fun to watch, if not just a tad impossible to believe, and the film does certainly has its moments; both exhilarating and cringe-inducing.

To elaborate on the latter, the script of this film is nothing short of horrible. There are a couple of laughs – most notably from crime boss Doc’s son, who cases out the joint they are to rob the next day like a pro, at eight years of age. A nice touch. But nearly every other line – most notably nearly every line that is uttered by Jamie Foxx, not to mention nearly every overly sentimental moment shared between Baby and random waitress Deborah, a girl that he happens to fall in love with in the space of what feels like a week. 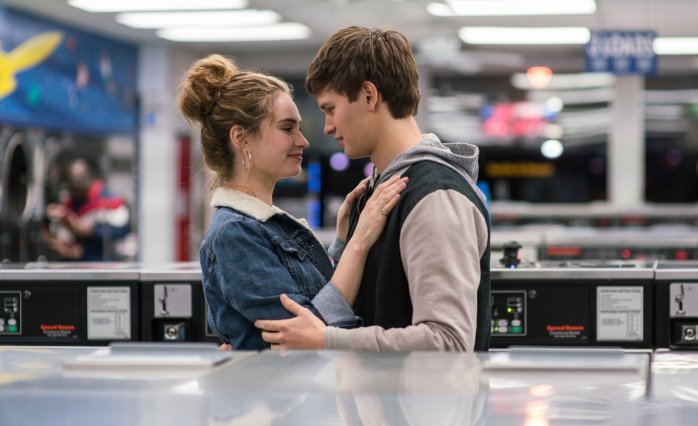 This is allegedly a heist flick that focuses on the driver; why a romantic element was not only thrown in, but made a major part of the story, boggles the mind, as every time the two get together, all the momentum that the film had built up previously with its fantastic car chases and incredible soundtrack is sucked dry.

Actually, let’s back-track. It doesn’t boggle the mind at all. Wright is pandering to as wide an audience as possible, and shoving a romantic element into films such as this is more common that it ever has been.

With no real plot to speak of, all we know is Baby is a ‘devil behind the wheel’ who owes Doc money. Who is Doc? Some sort of crime-lord. We learn nothing more of substance, other than that he organises heists and has contacts in high places. Thankfully he is played by Kevin Spacey, who is the only actor here who seems to be taking his role somewhat seriously. Everyone else seems to be winging it, though I did think Ansel was quite good despite a few irritating character traits, which is obviously of no fault of his own.

But let us get back to the soundtrack, which is by far the best aspect of the film. One of the neat aspects of it is that it isn’t a score to the movie – it is part of the main character as he drowning out his tinnitus – his “hum in the drum” – with music for much of the film. We are listening to what he is playing.

His OCD-like obsession with playing the right track for each drive is somewhat humorous, but is given extra levity given the fact that many getaway drivers were interviewed in preparation for this film, and many were very superstitious about what songs were playing as they drove.

The songs chosen though are truly superb. The rest of the film may be incredibly average, but the soundtrack cannot be faulted. The second scene must be highlighted as it begins with the horns from the over-used song by House of Pain, only to turn into the soulful track Harlem Shuffle. This scene in particular will probably annoy some as the main character mouths along, dances and air-drums to some of the music. This however is NOT a musical; this is a semi-action film that has the perfect tracks to accompany said action. If only it didn’t contain so much filler, not to mention an extremely predictable climax with multiple unsurprising ‘twists’.

If it weren’t for such a well chosen set of songs to match the action, this would have been a very, very bland film: one with an extremely basic (read: lazy) plot,

thin characters, an incredibly shallow love story, a large amount of throwaway/laughable dialogue, not to mention a sense of humour that for the most part is lacklustre. It also features nearly an entire cast who seem to be phoning in their performances. If it weren’t for such taste regarding the soundtrack, as most of the tracks are obscure and won’t sound familiar to most viewers, this bizarrely high-rated film would fall flat on its face, dislodging several teeth and choking on them to near death.

Three beers out of a sixer. Barely.