I first saw Matthieu Amalric in Roman Polanski’s last film, which oddly enough can be compared to this film in some ways. The intensity he brings to his role in THE BLUE ROOM is reminiscent of his performance in VENUS IN FUR, though I feel this is easily his best performance to date. Perhaps unsurprising, as he is in the director’s chair this time around. Adapting from the source novel (or short story) written by Georges Simenon, the film motors through the plot in just over 76mins, with the tension rising as each new piece of information is revealed. The structure of the movie is not entirely original, but it is handled with French finesse. I suppose you could call this an erotic thriller for lack of a better term, as that is what it is at its core. From the beginning of the movie, Amalric’s Julien Gahyde is being questioned, but we have no idea why, or by who. 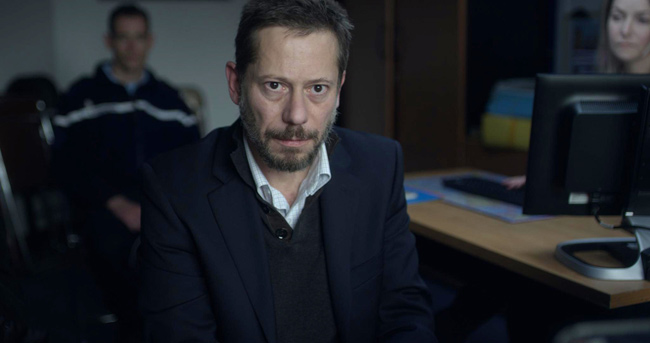 He is not very co-operative or talkative; each time he is interrogated he looks lost, as if he is dreaming of the lust that has landed him in such a situation. His beard looks unkempt, he simply doesn’t look well. As events transpire we begin to realise just why he is looking this way. Using the narrative structure I mentioned, Amalric introduces new elements to the mystery with perfect timing. Each time he is questioned we don’t know what it means, since Julien is so uncooperative. Then we are taken back to the past where we see a scene or two that explains this new information. These scenes are essentially answering the questions that Julien is refusing to. However, nothing is ever fully explained. This movie is filled with ambiguity, and each new ‘clue’, each introduction of a new theme is consistently surprising and each time it changes the momentum of the film. Minor, major, trivial, we never know until we watch the scenes of the past that accompany the questions, and by film’s end, we still are not certain of what exactly happened.

THE BLUE ROOM does a fair amount of genre-splicing and consequently is an extremely different film to those I am used to. It is a story about lust versus love, how the two can get mixed together, creating complicated scenarios. It is also an apt demonstration of how lies can pile up on top of one-another. Julien’s character is also interesting, as we essentially see two versions of him: one barely able to speak cohesively, and another who is married but can’t stay away from THE BLUE ROOM.

Julien seems naive; a coward of a man, and his refusal to cooperate creates more tension; the scenes from the past become more engaging as we find out more pieces of the truth. Or are they just Julien’s version of the truth? The movie constantly has you thinking. This back and forth style continues for most of the film’s runtime, save for the final act. This narrative structure doesn’t become annoying or bore-some in any way, in fact due to the idea of taking a simple affair and pairing it with suspense, I was left wanting more. Not to mention the film is too short to become sick of a narrative device.

I loved THE BLUE ROOM, and the final act is simply spectacular. A fine example of efficient film-making; the final act could have been five times the length it was, but with the use of some beautiful classical music, some great acting without words, and fine editing, it is over before you know it, with ambiguity having the final word. I found myself utterly riveted.