Son of Saul was Hungary’s nominee for the best foreign language film Oscar, and it is easy to see why. Films about the holocaust are often labelled Oscar- bait, but this film manages to poke its head out of the pack to present a confronting, intimate look into not only Auschwitz, but into the Sonderkommando, German for ‘special unit’. This name does not at all reflect what this unit’s job was, and is interesting in that it is an example of the way Nazi Germany manipulated language to their advantage.

At the beginning of the movie we see a title card briefly explaining the situation of the Sonderkommando in Auschwitz: they are a group of prisoners who run the crematoriums, burning their brethren under the threat of death. They had a small amount of freedom compared to the other prisoners, but were routinely replaced, gassed themselves. This was because Nazi Germany perceived them to have information on how the SS ran the camps, and they didn’t want that knowledge leaking out to normal prisoners.

The first ten or so minutes of this film was one of the most confronting and immersive scenes I have ever seen. Immediately noticeable is the camera-work; we are locked onto Saul, following him as he goes about the business of a Sonderkommando. Whether the camera is following him and the back of his head, or studying his face closely, we are immediately thrust into Saul’s hectic world. Apart from a few scenes, Saul is on screen all film, with a hand-held camera following him, almost like an unnamed, silent comrade. This opening scene is one long scene with no cuts, and this trend continues with many long takes forming a portrait of Saul. The editing work is near perfect.

Given their job, this is a very intense introduction into Saul’s world, as at one point we see him nonchalantly dragging a dead naked body along the ground by one arm. For this entire sequence there is minimal dialogue, only orders being thrown about, interestingly without subtitles. Saul’s German is weak at best, and the design of the film is obviously to present a day (or two) in his life; therefore, we hear orders yelled in German, only subtitled when entirely necessary. This creates a truly scary experience, such is the authoritative tone of the German language when you barely understand it, working under the threat of death. 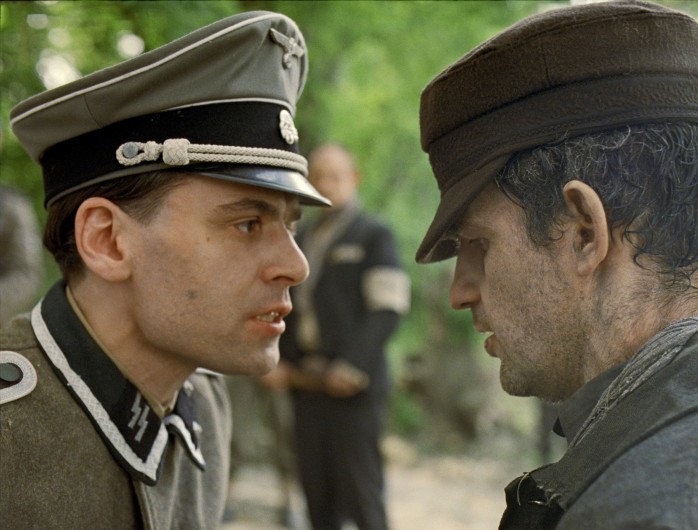 The camera-work used also gives the film a claustrophobic yet intimate nature – we follow Saul for almost the entirety of the film, therefore seeing what he sees, hearing what he hears. To add to this atmosphere of tension and confusion is the use of focus, or rather the lack of it. The film allows us to see what Saul sees, while everything else is often blurred and unrecognisable. Add to this combination a complete lack of a score and great sound-editing, you have yourself quite an experience. You feel like you are in the camp.

Another fascinating aspect is the religious zeal within Saul, often to his own detriment. Because of the small amounts of freedom these men were allowed, he comes across a child who has just died in a truly awful way. He sees the boy as his son and becomes determined to give the child a respectful Jewish burial despite the numerous and obvious roadblocks. Saul conspires with fellow prisoners to have the body of the child hidden, but struggles to find willing participants. This is what drives the admittedly thin narrative, but a film this intense and raw doesn’t need a meaty plot. The action alone says enough, it could almost be seen as a type of horror film, such is the situation these men find themselves in.

And that situation is poignant and caused a stir at the time. These men are burning the remains of their own kind. The morality behind this is difficult;

it is obviously an awful thing to do, but suicide was the only other option. They weren’t randomly shot like other prisoners, they were an important cog of the disgusting Auschwitz system. This is all juicy food for thought after watching this incredible film, remarkably from a first-time director – László Nemes. Géza Röhrig also shines as Saul, using his face to do most of the talking. Considering he hadn’t acted in 25 years, his performance is incredible. Son of Saul is one of the most moving dramas I have ever seen, and given the subject matter, it easily ranks among the best, if not the most horrifying. The ending will also linger long after the credits roll.

This one will be near the top of my best of list for this year, that is for damned sure. A full six-pack for this unique and intense drama!

NOTE: I highly recommend watching this trailer, to get a sense of the camera-work that this film offers. It is quite something.

Lastly, a rare photo of these men in Auschwitz: