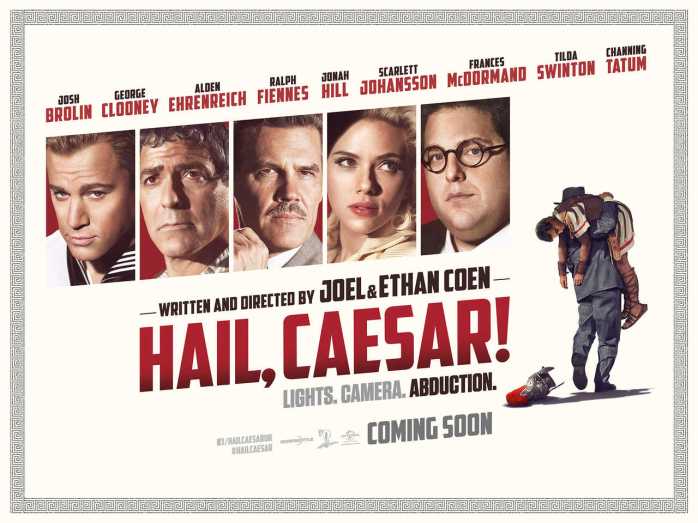 The Coen brothers instantly became my favourite film-makers after I saw The Man Who Wasn’t There. It was unlike anything I’d seen before. Since then I have seen most of their films, and the only dud of the bunch is their (incredibly unnecessary) remake of the classic UK comedy, The Ladykillers. I am aware that I am quite probably rambling at this point, but what I am trying to say is that you truly do not know what you are going to get with a Coen brothers film. A gangster flick, a classic throwback noir tale, a folk singer down on his luck in the 60’s, one of the first stoner comedies… their films contain so much variety that it is quite amazing that they write all these great stories themselves. No strangers to period films then, Hail, Caesar! looks immaculate from the opening scene. Harking back to the 50’s, the set/costume design is perfect, paired with some mostly understated but great looking cinematography.

The story is very simple but also very entertaining, while also commenting (quite correctly) on the state of cinema, the true purpose of big budget films, and what goes on behind the scenes. We follow Hollywood fixer Eddie Mannix as he visits a vast array of stars and directors, and almost every visit offers some great moments. I won’t lie, this is not funny on the level of The Big Lebowski or Fargo, but I was chuckling and smiling for the entire duration. This is a funny movie.

Capitol Pictures (sound familiar?) is making an epic movie, titled, you guessed it, Hail, Caesar! It is to be a Roman epic, a Ben-Hur-like massive production. It stars Baird Whitlock, played by George Clooney, who snaps out of the every-day character he normally plays and inhibits this bizarre movie-star. More than three times now, the Coens have gotten more out of Clooney than any other director.

Early into the movie Baird is kidnapped, and Mannix does his best to hide the fact from the press while trying to shoot scenes for the movie using Baird’s double. The kidnapping itself is quite funny, as Baird doesn’t initially seem to realise that he has been kidnapped. Those who have kidnapped him oppose the film industry and what it represents, among other things, and the conversations between this group of ten or twelve people is funny in that dry way that only the Coens can pull off. As all this happens, Baird begins to understand their position.

Despite the kidnapping, Mannix is a busy man, keeping his eyes on stars’ images, visiting other film sets and fixing problems, all while trying to keep things away from the press.

First he has a meeting with leaders from different religions, to talk about the religious themes in Hail, Caesar! What ensues is a hilarious conversation between all the priests/rabbi about who is god, who recognises god, who the son of god is… it goes on, with the conversation having nothing to do with the movie at all. I couldn’t help but giggle stupidly. The Coens do this sort of thing so well, their dialogue is near faultless.

He next visits a drama being made by a prominent director. The only replacement they could find for a last minute replacement is Hobie Doyle (Alden Ehrenreich). He had only worked on westerns previously, not talking a great deal, but he was all they could find. I couldn’t help but laugh when he walks into the dramatic set very rigidly, reminiscent of a John Wayne impersonation. A discussion between him and the director is also quite funny, as the director tries to have the new actor say a line right. Ralph Fiennes is great as the director here, recalling his humorous performance in The Grand Budapest Hotel.

Mannix visits other movie sets, one that looks to involve mermaids and synchronised swimming, and here we meet DeeAnna Moran, an actress with an attitude. She has been in two marriages to two ‘louses’, but is now pregnant. Enter Mannix, who needs to protect her image and ensure that the baby goes up for adoption under a different name, so she can adopt the child and keep her image clean. Eddie, it would seem, is quite good at his job. Making it harder though is Tilda Swinton, playing two journalist twins who are both hilarious caricatures, supposedly opposite, but both dealing purely in Hollywood gossip. Mannix handles them well, in again a very dry manner.

There are other films and problems Mannix needs to fix, and while they may seem like sub-plots that don’t really go anywhere, they aren’t so much plots as they are movies within the movie. They are very funny for the most part, but more importantly they also depict the life of Mannix perfectly, showcasing the sheer amount of people he has to keep in check.  Representative of this is how often he checks his wrist-watch throughout.

Unfortunately, this is not up there with their best efforts. It was certainly funny throughout, but the story lacked any real urgency or suspense – especially for a film about a kidnapping. It is a comedy, but I think the kidnapping could have been explored further, though what we do get is quite funny for the most part. There is also a lack of energy that a film like Fargo had in spades. The ending was also a bit of a let down, but it is far from ruining the film. It also had that Coen weirdness to it, which you either love or hate.

It may lack in some areas, but this is a funny Coen brothers flick through and through, with eccentric characters, oddball humour and their patented snappy, humorous dialogue.  It won’t sit as a favourite for many Coen fans, but they have made so many great films now it must be hard to top each previous effort. Hail, Caesar!, like all Coen films, is its own entity entirely. And let’s face it – a solid flick from the Coen brothers is going to be better than most other films anyway.