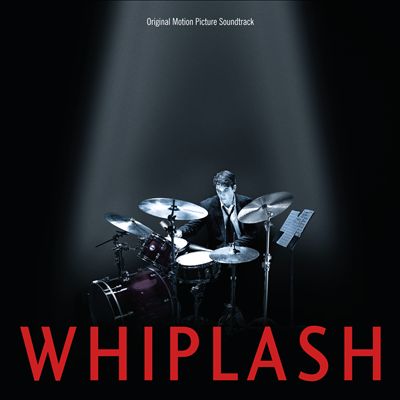 Whiplash – the ultimate film for a die-hard music fan, and for drummers especially. The songs played by the jazz ensemble of the film are fantastic tracks, but how does the rest of this album hold up?

When I got my grubby paws on this disc I was instantly struck by the title track.

The song, Whiplash, is reeeally fast. Faster than you realise while watching the film. No wonder Andrew had so much trouble! A double-time swing beat at that tempo is manic drumming, and could perhaps be compared to learning how to play fast blast-beats in metal tracks that I (try to) write, among other fast paced, difficult beats. Yet jazz is an entirely different beast to metal – I know I can’t play it at all – making the track somehow more impressive, at least to me. These difficult drum beats, coupled with Fletcher’s insanity and perfectionism… The intense relationship that forms between Fletcher and Andrew suddenly makes a lot more sense!

It is also one of the few tracks that wasn’t a part of Justin Hurwitz’s score and was a song that was already in existence. They picked this Hank Levy-penned tune for a reason, as his interest in odd-time signatures in jazz was before most other musicians began to dabble with these odd rhythms. And most drummers will tell you that odd time signatures, odd rhythms…. they can be a BITCH! Add to this the immense pace the song is played at; no wonder the two characters almost came to blows!

Listen to the Hank Levy Legacy Band playing their version….

…And this is the version that features on the OST

Pretty bloody fast eh? Which do you think Fletcher would have been more approving of?

Needless to say, I am incredibly envious of both these drummers. I’d love to somehow learn to play jazz, and then this song, after seeing YouTube uploads of other drummers having mastered the song… Damn them! I’d love to know who it was that was behind the kit for this track. I don’t know who it is but I’d like to shake his hand and steal his magical powers.

In fact, I have done this once before, I shook the hand of Dave Lombardo, drummer of SLAAAAAAAYYYYYYYERRRRRRRRRRR!!! I had broken my hand a month or so before, and couldn’t drum with it. After I shook Dave’s hand I could drum again. And I was somehow better than I was before! This of course may have been an epilepsy induced delusion, but screw that, it happened!! I’m not crazy, honest…

The other fantastic song from the film tackles another existing song – Caravan – penned by Juan Tizol and first performed by Duke Ellington in 1936. This is another great choice of crazy rhythms and some seemingly inhuman drumming.

A rendition not from the soundtrack…

…And one from the soundtrack:

As for the rest of the score…. how did they make it work within the confines of a movie about music? This quote from Justin Hurwitz answers many questions:

“While the original jazz would be somewhat straightforward — I would write to specific styles and eras — the movie’s dramatic underscore was more of a conundrum.  How do you score a movie that already has so much music in it?  We knew it shouldn’t be a big band score, since there’s enough big band jazz throughout the movie.  We knew an orchestral score wouldn’t fit the vibe of this film.  And an electronic score doesn’t make sense in a movie about musicianship and instruments. Eventually we came up with the idea of building a score using the techniques of electronic scoring, but using 100% real instruments — in fact, only the instruments in a big band lineup.  Doing so, we would have a score that felt atmospheric like an electronic score without actually being electronic, and organic to the movie’s existing soundscape, without feeling like just more big band music. Our scoring session has to be one of the most tedious ever, as I recorded the score cues one note at a time.  Literally, one note at a time.  What this allowed me to do was layer and manipulate the notes in a way that musicians can’t.”

Now I gotta say, as an aspiring electronic musician who is trying to do this sort of stuff, I am simply blown away. He is using a modern and almost entirely new approach to writing a score by using technology to get the most out of real instruments. Having read that quote, colour me inspired! The fact that he only used instruments that would be a part of a Big Band jazz ensemble helps this not only match the movie effortlessly, but as he says, it avoids sounding like a traditional soundtrack, which really would have sounded out-of-place. Justin Kurwitz is a name I’m keeping an eye on.

Throw in some quotes from good ol’ Fletcher and we have another OST that most definitely has its own sound and is another in a long line of recent films that are pushing the film score into new places. Johnny Greenwood, Nick Cave, Trent Reznor…. All changing it up slightly to create pieces of art that are more than something to compliment a film.