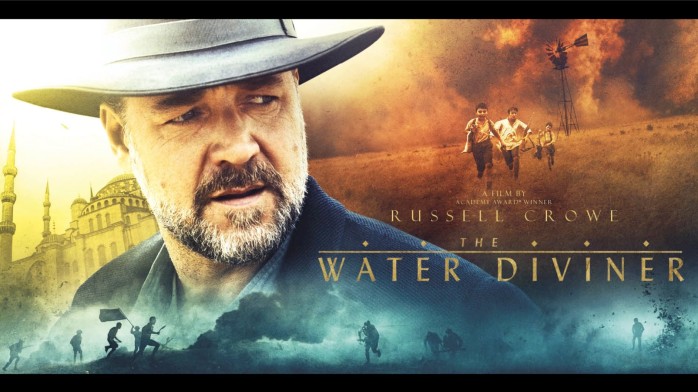 I will be the first to admit that I have never been a fan of Russell Crowe…. Apart from some of his earlier work… Playing a young gay rugby-player in the fantastic The Sum Of Us, and in direct contrast to that role, his haunting role as a psychotic skinhead who would rather starve than eat ‘Wog’ food in one of the most terrifying Aussie classics ever made: Romper Stomper, will forever stay with me. Rusty has certainly come a long way since those early days, and despite his ups and downs along the years, he remains perhaps Australia’s most recognisable modern actor, perhaps equal with Nicole Kidman, Hugh Jackman, and the late Heath Ledger. Let’s just ignore that Rusty was born in New Zealand shall we? 😉

After almost an entire lifetime in the movie biz, (he first acted, uncredited, in a Aussie TV show as a child, then going on to appear in the classic Aussie soap – Neighbours – in 1987), he has decided to get behind the camera for his first feature film. Unlike other actors-turned-directors, Crowe has amassed decades of experience within the industry and it shows when watching the confident direction of his new film, The Water Diviner: A simple story that proves to be not so simple, as Connor (Crowe) decides to make the journey to Turkey, four years after the end of the war, despite knowing that his three sons have died in the battle of Gallipoli. He simply wants to bury them with the rest of their family back home.

His experience within the industry is apparent in many facets of the film; from the sparse Australian outback to the footage shot in Turkey, the landscapes are incredibly picturesque, a giant painting to admire on a giant screen. His confidence in the chair is also evident in much of the cinematography, which feels seamless yet at the same time beautiful. However this is often a raw beauty, as one of this film’s strengths is the flashbacks the movie shows of the war, specifically that bloodbath at Gallipoli, often inserted suddenly after a sedate or strikingly beautiful scene – creating a juxtaposition that makes watching the lost souls crossing no man’s land that much more haunting. The fighting is depicted with a fierce realism, and by not over-playing his hand by inserting gratuitous action scenes, Rusty creates the perfect balance between order and chaos. Each flashback to the assault is riveting, and again that opposing style to the more sedate nature of most of the rest of the film gives each scene of war the impact it rightly should have, giving me the chills more than once. War is Hell, and there are some scenes that depict it as well as any war-time movie ever made.

Near the beginning of the film we see the aftermath of the only successful aspect of the ANZAC (Australian and New Zealand Army Corps) Gallipoli campaign – the evacuation of the troops after the disaster of the Gallipoli offensive, an attack ordered by a British officer. Hiding in trenches, we see the Turkish fighters shooting at the trench opposite. A decision is made by an officer, who will appear later in the film, and he orders his men to charge the trench, only to find it empty. In possibly my favourite war-time example of human ingenuity, the ANZACs tied tins to the triggers of their rifles so that when enough rain filled each tin, it would make it heavy enough to fire the rifle, deceiving the Turkish Army into thinking they were fighting an opposition, when in reality they were sailing away to safety. The Turkish regiment sees this desertion as a victory and celebrate the retreat of the enemy. However, as the saying goes, the battle was won, but not the war.

Subsequently, the film sheds light on how the Ottoman Empire was carved up and fought over, with territory for the taking. As Connor single-mindedly and stubbornly continues on his mission, in the background we see Turkey in chaos as protests cause the roads to shudder. For these people, the war is not over. The Turkish War of Independence is looming. Connor, not taking ‘no’ for an answer, is able to get a boat to Gallipoli where we see an unlikely scenario in which the aforementioned Turkish officer is forced to cooperate with ANZAC officers post-war (he comments near the start of the movie ‘I need an escort in my own country now?!’) to help find the thousands of bodies that lie in the trenches and the no man’s land between each one. Connor refuses to leave despite being ordered to and a deal is made allowing him to look for his son’s bodies – he has dates, locations of when they last wrote to him. The Turkish officer, who at the beginning of the film is not depicted as an honourable man, offers to help Connor as he knows the battlefields.

I found this approach to enemy combatants refreshing, post-war or not, as it showed the enemy as having honour and compassion – or perhaps guilt – driving him to an act of kindness for a complete stranger. These and other similar elements are sorely lacking in almost all modern war films, especially from the US, where the standard recipe seems to be two cups of easily distinguishable good guys, mixed violently with ten cups of evil-doing ‘enemies’, who more often than not are simply moving targets without personalities; fodder to be mowed down in ‘action’ packed, bloody set-pieces.

When Connor is in Turkey he is befriended by a young local boy who insists that he stay his parents’ motel. His mother, upon hearing that he is Australian, is instantly hesitant to allow him residence. They somewhat inexplicably form some type of relationship over the course of the movie, creating some utterly unneeded sentimental moments that had me groaning aloud. Fortunately, the film is very bare of moments like this, but when they appear they may induce a cringe or two as they are unbelievably unneccessary. But despite this flaw, the movie is not overlong at all, in fact the two hours fly by as the film is both entertaining and educational. I am a World War II buff, whereas I know little about World War I. This film obviously is not concerned with intricate details of the first world war, but enough information is scattered about to give the viewer a glimpse into post-WWI Turkey, as mentioned above. It certainly stirred up enough interest for both myself and my father to do further research to find out how it all played out, and why.

Apart from one or two wooden moments from Rusty, I found the screenplay and script fantastic, with each line delivered perfectly by the entire cast. It is good to see Jai Courtney again, an upcoming Aussie actor who appeared in Angelina Jolie’s Unbroken late last year, as well as Divergent and the Australian cop-thriller Felony. His officer was instantly and consistently believable, and the same must be said for his opposite, the Turkish officer played by actor/writer Yilmaz Erdogan. The chemistry between these two was a tense, uneasy truce, as ex-enemies now tasked with mining the haunted fields of Gallipoli for fallen soldiers; of both sides.

This relationship between former enemies – the ANZACs and the Turks – has lived on to this day, as every year Turkish, Australian, New Zealanders and countless others make pilgrimages to Gallipoli for ANZAC day – April 24 – to pay respect to those who lost their lives.  As for Rusty, this movie is in his comfort-zone and he portrays the heartbroken father with ease. I’m not sure if it is because he directed and starred, but this is easily one of the better recent performances by big Russ. Compared to his depiction of Noah, he seems like a different actor here, full of energy, emotion, and heart.

4/5 – While the film does cater to some typical Hollywood tropes that let the movie down slightly, it more than makes up for this by defying many of these standards, creating an intriguing war-time movie unlike any other. It is not anti-war. It is not pro-war. It is simply a story of a desperate man who is willing to do anything just to find the location of where his sons died in one of the ugliest battles of World War I. One can only hope that this film garners more attention worldwide than all the great, intelligent Aussie films released last year.