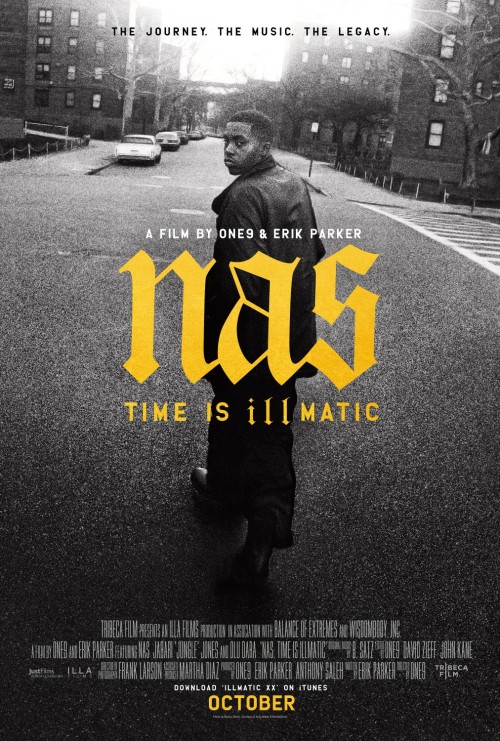 Directed by One9, Written by Erik Parker

“I never sleep, ‘cos sleep is the cousin of Death” – N.Y. State of Mind

As a documentary, this covers much more ground than Nasir Jones’ first and forever classic LP, 1994’s Illmatic. From the reality of being raised in the projects, around what was then the boom of cheap and plentiful crack cocaine, to all his friends who have suffered in many ways, and finally the ending in which Nas finds himself coming full circle; this is about more than an album. But of course, the key figure is Nas himself, and he offers many heartfelt and honest thoughts on not only his life growing up in the projects of Queensbridge, but additionally he also offers insight into each track on the album, from the first track N.Y. State of Mind – a trip to the streets of New York, to the second-to-last track, Represent. It brings an entirely new meaning to his music, for me at least, a white boy from Australia who would blind you with his pasty, ghostly white complexion. But, I am a drummer, I have rhythm, and hip hop has always been a special genre of music to me. To see it painted as the art form it is was great to see, and I am glad that the celebratory ‘gangster’ tagline to the music is steadily disappearing, permanently in the rear-view mirror. In addition to Nas’ personal thoughts about his life and each album track, a host of guests are featured; producers, rappers, all speaking highly of the record and Nas’ influence at that time in hip-hop, and the pioneering, original music he gave us as he rose to fame in the late 80’s hip-hop scene. Fellow collaborators also add their perspective to the track they were a part of, as well as offering a different perspective to the overall narrative of the documentary; both musically and otherwise. Other guests include his brother and his father who bring their own unique perspective of Nas as he grew up and then blew up.

This documentary exceeds in not only setting out what it aims to achieve, but it has a unique flow to it. As Nas comments on each track of the album, it turns out that the songs were his life. He was writing reality as he saw it. Each track addresses a different issue that is obviously still important to him, and as he talks about these tracks he talks of the events and circumstances that influence the main theme. This is the opposite of ‘gangster’ rap, Nas’ lyrics were real and were intended to spread awareness of what the black community went through during the period he survived. This is further elaborated on slightly by other guests, as they accurately observe the mass imprisonment of young black males. This is only very lightly touched on though, this film isn’t trying to convince you of anything. One may think that the film is just attempting to preach a message with this spin, but it doesn’t need to as Nas nails the message to the wall. As he looks at a photo of himself and about 15-20 of his friends, a grainy black and white photo from the 90’s, he points out almost every person there as if they were all his best friends, but then slowly naming them all as dead, as doing time or having done time. It is a harrowing picture with his narration, and it successfully turns the doco into more than a film about an album. It is a film about a culture, both black and the hip-hop culture when Nas was on the rise – that period of the 80’s and 90’s where the streets of Queensbridge, New York, were never a safe place to be, for anyone. But the exploding hip-hop scene was Nas’ way out.

This is a personal film that opens up Illmatic for all, and each time Nas spoke he changed the way I listen to every song on the album. It is reality as told by Nas, making the lyrics hit that much harder. Additionally the film shows Nas to be an extremely caring, friendly-with-everyone and spiritual individual. It is a short film with no filler, and any hip-hop fan will be listening to this album after they see this – whether they are a fan of Nas or not. And if not… They should be! Illmatic will forever be a classic, pioneering hip-hop record that is laden with heavy meaning that obviously still matters to Nas, as he is touring currently, playing the album start to finish. He is even coming to my neck of the woods, a country-town capital city that so many big names skip! This really is how a straight doco should be done. Plentiful amounts of insight from multiple personalities as it ends on a positive and thoughtful note, as Nas acknowledges that he has come full circle since he was a kid growing up on the streets. Throughout the entire film and the short bursts of live footage, it is obvious that his craft means no less to him today than it did 20 years ago.