THY CRITIC MAN & EPILEPTICMOONDANCER TAKE ON THE HORRORS OF CHRISTMAS! 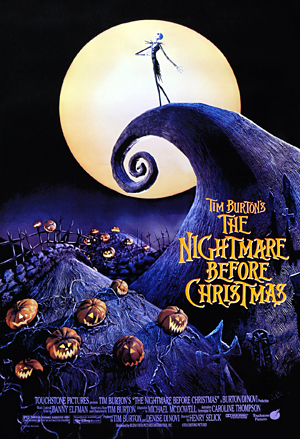 Thy Critic Man: “To make a long story short: It is the Christmas season. I called upon some friends to assist me in taking on the most horrifying Christmas releases of all-time. What do Epileptic Moondancer and I have in store for you kind folks? Two completely unrelated movies. There is absolutely no reason why P2 should be posted alongside Tim Burton’s A Nightmare Before Christmas. Wait, it is Christmas. There we go. They both have something to do with Christmas!

Epileptic Moondancer: I was intruiged when this Christmas series started, as I really like the concept. Thanks to Mr. Critic Man for having me, its about the only real thing I have actually done for christmas! His blog is also well worth checking out for recent movies, and subsequently was the very first I came across after creating this site. Check out his original post here folks.

Anyhow, enough blabber! Finally I post my contribution to this year’s Christmas. The movie I have been given to review is A Nightmare Before Christmas. With no experience of Tim Burton at all I decided to jump into the void and find out what the Nightmare was all about.

I arrive at this year’s Christmas season as a virgin when it comes to Tim Burton. I’ve heard good things, I’ve heard bad things, and I know he seems to have an odd obsession with Johnny Depp. Further than this, I couldn’t say anything about any Tim Burton movie barring the fact I do remember watching a movie in primary school, where some crazed fool had rusted, mutated and bent-out-of-shape Swiss Army knives for hands. Now, much to my family’s chagrin, I can pop my Burton-cherry proper as I am picking the movie for us to watch. Nightmare Before Christmas is the title I have been given to write about for the Critic Man’s Christmas special. That has a ring to it, don’t you think? “The Critic Man’s Christmas Special.” This flick seems perfect for such a topic; I really like this concept that the Critic Man has come up with. Apart from the previously featured Black Christmas, I’ll be honest: I had no idea that there were ‘horror’ movies based on or around Christmas. Indeed, the rock I live under casts one mighty shadow. But enough jibber-jabber, onto my first real Burton experience.

I’ve heard such varying things about Burton that I didn’t know what to expect.After watching this strange beast of a movie, I see that my initial impressions were dead wrong! This here is one hell of an original and unique movie, not to mention one hell of a trip. In some ways it reminds me of the original Alice in Wonderland; a wonderfully random trip filled with crazed characters who contribute to create an intense journey through the rabbit-hole. Nightmare evoked very similar feelings for me; crazed characters with crazed motives, songs sung in high spirits despite the numerous oddball lyrics, and as this movie moved forward, I felt the same sense of intensity rise, as if this movie has its own rabbit-hole to leap into. The bizarre and surreal nature of the film is something perfect for a Christmas movie. I’ll be honest, I never thought I would enjoy any other movie where characters burst into song at every opportunity as in Alice, but the songs scattered about during Nightmare are similarly bonkers while bringing a smile to my face. I was wrong, and found myself nodding my head to each new tune.

The child-friendly, simple plot is ingenious and perfect for a family, Christmas day flick.The King of Halloween and all things evil, one Jack Skellington, discovers a strange, entirely different world to his own, a place known simply as ‘Christmas Town’.  He learns about the entity that is Santa Claus and endeavors to sprinkle his own personality over the town this coming Christmas, using similar creations from his kingdom: the aptly named ‘Halloween Town’.His plan is to do this while ensuring Santa Claus is out of action on Christmas Eve. His gifts in replacement for Santa’s are wonderfully imaginative and humorous, representing Halloween and Christmas simultaneously. What at first seems like a children’s film with an appropriately light plot becomes an entertaining tale for all ages, as certain gags might go over the heads of children, while others are a little disturbing. Either way, this flick had me smiling ear to ear.

The film is very dark, which is a nice change for an animated film, reminiscent somewhat of this year’s The Boxtrolls – another animated feature that has broad appeal. While Nightmare isn’t particularly scary, it is frequently unsettling. The relentlessly upbeat sing-alongs carry a slight air of insanity, while Jack Skellington certainly seems insane himself. In addition to the ambitious Jack are many unforgettable characters;from Sally the rag-doll who has the unique ability to stitch errant limbs back onto her body to the Mayor of Halloween Town, a character who is literally two-faced.Oh, and I can’t neglect to mention the mad scientist Dr.Finkelstein who, when confused, opens his skull to scratch his brain, rather than scratching the top of his head. Almost every character is written in this way, and all are extraordinarily imaginative and eccentric, creating a movie for the young and old alike. I could go on further; the incredible animation deserves recognition, predating the visuals of Pixar productions, while looking no worse for it. Each character is meticulously created and animated to perfection, as every character has a unique design to their aesthetic look and the way they walk and talk. Considering the age of the film, the visual accomplishments of this film are plentiful and deserve recognition. Of course, an animated film always has the potential to appeal to all ages, and Nightmare successfully does this and is perfect for a Christmas-time family movie.

I can be a picky bastard at times, hell I can be a miserable bastard at times. But I would be without a soul if I didn’t enjoy every second of this movie despite it being extremely different from the sort of films I normally enjoy. Is this the perfect Christmas movie for the entire family? Even my father was intrigued by it, so I’d answer that question with a hearty “yes!” Furthermore, after enjoying it as much as I did, I want to watch it again as soon as I can!

Get the family gathered, throw on this movie on and revel in its gleeful insanity and its incredible looks. Merry Christmas!

…And from Thy Critic Man himself:

I’ll be completely honest. I like this movie. I liked it the first time that I watched it. I liked it the second time that I watched it. I still like it now. What is there not to like? I like Rachel Nichols. I like her white dress. I like her determination to survive (although I will admit that her character isn’t very bright). I like Wes Bentley. I like that he isn’t wearing a tight white dress as only Nichols looks good doing that. I like his psychotic character. I like this traditional cat and mouse chase. I like how Franck Khalfoun turns rather formulaic material into something enjoyable to view.

I don’t like the excessive amount of negative reception that P2 received upon its release. I understand it. But I do not like it. I totally understand why some people don’t like a few things about the film. I think that there are some things about it that I don’t like as well. I don’t like many of the dumb decisions that the lead character makes. I don’t like how cheesy some of the lines are. No wait, I totally like them. I’m quite sure the comic relief is intentional when Bentley’s psycho confidently utters complete silliness to his victims.  I don’t like…I’m already out of things to say.

If you aren’t expecting a classic thriller with enough thrills to blow the Christmas turkey right out of your ass, P2 works as an amusingly cheesy “crazy man against beautiful woman” (and anybody who tries to help her) chase sequence. For those who scare easily, I’m sure it will have enough tension to have you shivering a tad! To answer whether or not P2 is a worthwhile viewing this Christmas, ask yourself if you are in the mood for a good old stalk-and-slash first. That will answer your question. I like it. You might not like it. I’ll still like it though.

Superpower Film Scale: 3.5/5 (After a significant amount of beer)

One Comment on “THY CRITIC MAN & EPILEPTICMOONDANCER TAKE ON THE HORRORS OF CHRISTMAS!”