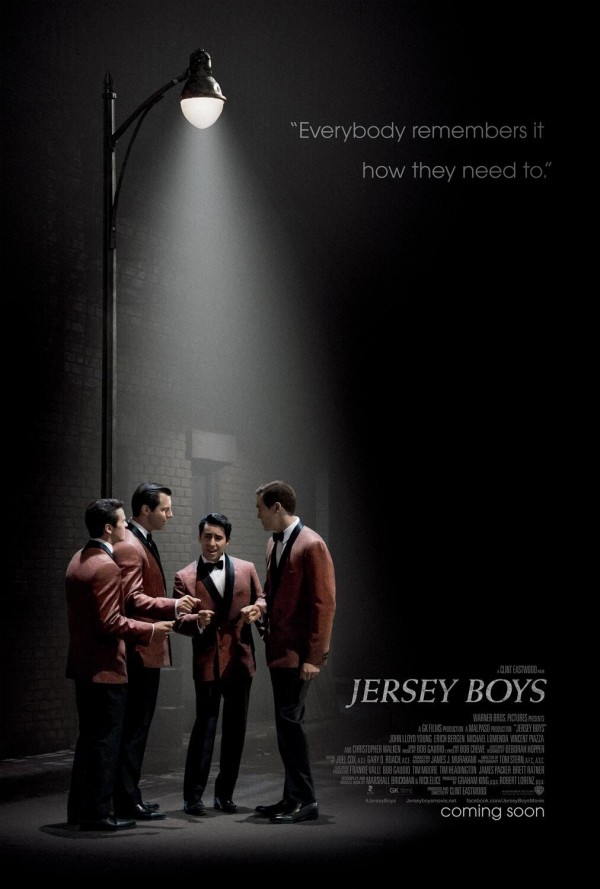 Boy did I fumble the pass on this one. I had just seen Get On Up, the incredible James Brown biopic, and reading about this flick’s synopsis: the first band to be put together by businessmen.. Well, it threw me off just a tad. I knew I wouldn’t like the music in the film, and despite the beast that is Mr. Eastwood directing the film, I didn’t see it at the cinemas. I am regretting that now, as I was instantly drawn into this movie from the word go – not actually knowing what it was for the first third or so because a friend had put it on without telling me what it was!! Which certainly gave me a unique perspective, for the first act of the movie I thought it was an incredibly well made film, but I did not know what it was! Then when their first ‘hit’ was played, plus the fact they were all from New Jersey, it finally clicked. I was watching Clint’s latest work! And despite my distate for all the music in this film, there is no doubt that this is a great film.

Instantly noticable to me was the lack of polish. Let me clarify: I mean this in a good way – the movie looked like it had been filmed decades ago, the period where the movie was set. Yet another testament to Eastwood’s talent. Another superb touch was the way he integrated that Jersey, ‘mob’ scene with the music. In fact, it was that first act, based in Jersey, with kids running with the ‘wrong crowds’, that had me guessing what I was watching. Then the music came.

I do not think it is any surprise at all that I had to look up these guys’ names and band after the movie finished. Business does not mix with art well, and this movie proves that in countless ways; in addition to the fact that The Four Seasons, Franky Valli, these names meant nothing to me. I think that right there says something in itself. But the internal conflict, the disdain that certain members began to show towards their producer, who was convinced that every song could not be anything but a ‘hit’; the direction the film took in the second and final act wasn’t surprising at all.

Business and art should not mix. Did I say that already? Unfortuntely, in this day and age, it is almost required to mingle with businessmen when trying to distribute art, of any medium, which is unfortunate, as this movie proves. Such tactics can lead to unpredictable results, not to mention conflict within the band itself.

A special mention must be made for actor John Lloyd Young, who really nails the insanely falsetto sounds of Franky Valli’s voice. He also played his part extremely well, rising from a very young, budding singer to essentially the star of the band. His best friend Tommy, again marvelously played by Vincent Piazza, was the character that provided the glue for this movie. He was the driving force moving this flick forward for most of the running time. The rest of the cast performed superbly, especially Franky’s wife, and I especially liked the touch of some characters breaking that fourth wall and talking to us, the viewrs, directly. Remiscient of Wolf On Wall Street, I loved this touch as it can be especially hard to pull off, and if done badly, the movie suffers immensly. But Clint pulls it off just as seemlessly as Marty did, and the movie is better for it.

Not knowing the band at all, this was an interesting lesson in the history of music, and a candid look inside what music producers are all about. Money, popularity, success. I think that sums it up rather succiently. It would seem that in todays climate, this has not changed a note; if anything it has become extremely worse, what with focus groups, market research into what the population wants to hear. Pop music these days is for the most part empty and shallow, and this movie shows why this is often the case. The musicians do not have full control over their creations, and in many instances – not in this movie, but moreso recently – it is not uncommon at all for a pop singer to have every single lyric written for them to sing. And of course, they have to be pretty!!

Overall, this is a fantastic look into where business first clashed with music, and it makes for a riveting film. There was no tension, no action, but the story alone was enough to intrigue me and draw me in, forcing me to watch until the end credits. That said, I think this movie was far from perfect; the aforementioed clash of business and music could have been elaborated on in so many different ways, but this scope was limited and while the story was told well, I can’t help but feel that this concept could have been further explored. Business/capitalism meeting art is a fascinating topic, and this film really left me feeling a litle let down on that front. Also, despite the amazing look of the film to match the period it was set in, apart from this, the film was visually rather mute, which was another dissapointment. And while I realise that this is purely objective, the soundtrack grated on my eardrums: horridly catchy pop songs littering every moment of the movie that I still can’t get out of my head. “Biii-iiig Girls… Do-on’t Cryy-ii-iii-yyy”!!

Ugh its in my head just typing about it!! Damn pop music and its absurdly catchy melodies! Make it stop, make it stop pleeeeease!!!!

This was obviously needed given the material, but for this movie-obsessionist, I thoroughly hated the soundtrack, despite its neccesity. I guess it goes to show that when you do mix pure capitalism with music, you’ll not only end up with a band whose name dissapeared into the ether; I had never heard of ‘The Four Seasons’, despite being a music-obsessionist also, but it was also a recipe for conflict and limited success. They may have some hits that get stuck in your head, but I thoroughly doubt that this band released a single album without any filler tracks. I doubt I will be proven wrong.

Despite my hatred towards their music, this was a finely crafted movie that had its flaws, but put accross a very meaningful and extremely relevant message that was unfortunately not expanded upon in ways that it could have; especially in today’s society, where pop music, essentially, is a business, and not much more.

3/5 – I was going to give it a 2.5, but I can’t judge this movie based on the soundtrack, as the soundtrack was integral to the plot. So I am ignoring that aspect to give the movie this score.